Cruelly branded the ‘devil’s child’ growing up in Sierra Leone, Michaela DePrince has defied expectation to become an icon for aspiring dance virtuosos everywhere – and now Hollywood is waking up to her story

Taken from the autumn 2015 issue of Dazed:

This spring, Michaela DePrince logged on to Facebook and found out she was famous. Sitting in her apartment, the ballet dancer clicked her ‘other’ messages folder and scrolled down in disbelief as she discovered 2,000 unread messages, all from fans smitten with the Sierra Leonean virtuoso and her triumphant survival story. “When I first saw the messages, I was like, ‘Oh my God, I’m so sorry!’” DePrince giggles, bounding along the corridors of her Amsterdam ballet company on a bright summer’s day. “But people are just surprised I actually answer. I’m like, ‘Yeah, it’s really me!’”

DePrince is the alternative icon that the classical dance world was crying out for. Alongside curvaceous African American ballet phenomenon Misty Copeland, she makes for a vital counterpoint to the sea of petite white girls with flat chests and non-existent butts. As such, it’s no surprise her inbox is blowing up. Since exploding into public consciousness in 2011 after being featured in acclaimed documentary First Position, she’s not only inspired dancers the world over to break the cookie-cutter mould, but emerged as an important voice for the marginalised. Training at the JKO School of the American Ballet Theatre, she faced discrimination in the US classical ballet world because of her race. She moved to the Dutch National Ballet company in 2013, where she is now a demi-soloist. It’s at this esteemed Amsterdam institution that she really feels at home.

“One reason I came here is because everybody’s so different,” says DePrince as we walk past rooms of trim dancers and cast-list pinboards. “I absolutely love that.” In the next studio, DePrince points out Jingjing Mao, who she co-starred with this summer in Chroma. DePrince performed to orchestral versions of songs by The White Stripes in a punk/classical hybrid by choreographer Wayne McGregor, the dance legend who worked with Radiohead on their “Lotus Flower” video. Not exactly Swan Lake. 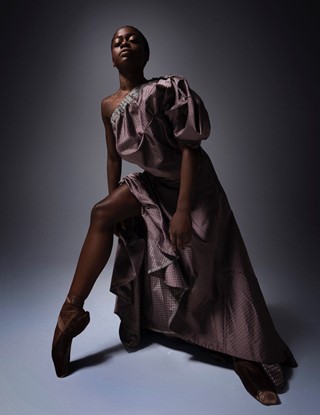 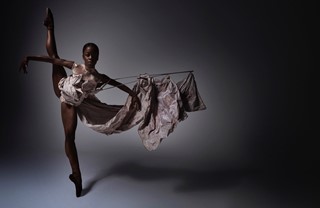 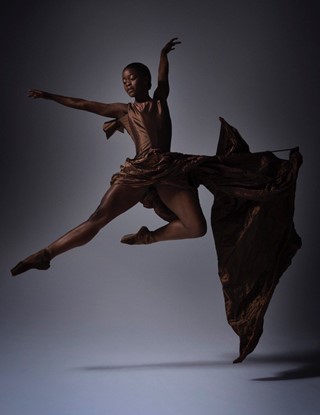 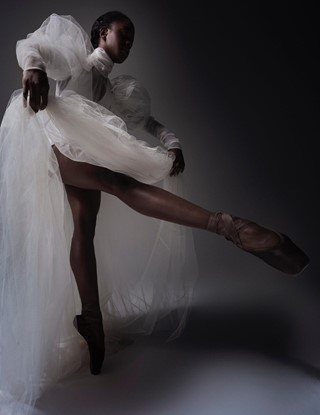 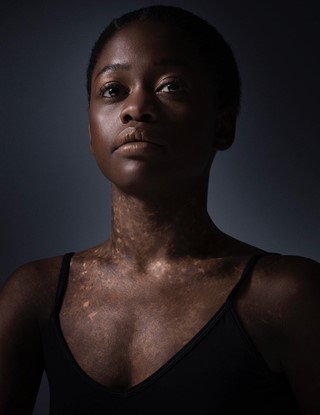 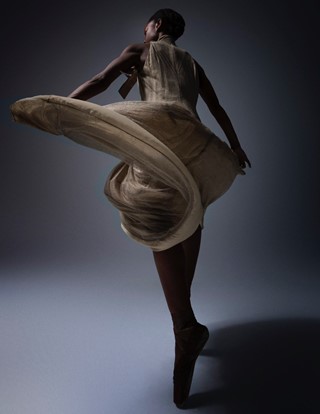 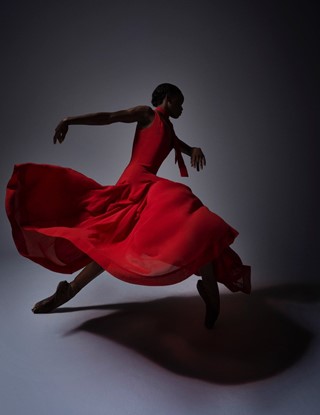 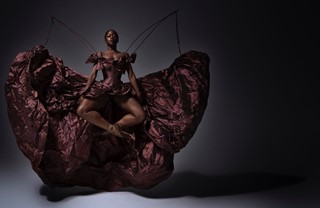 DePrince has made fangirls of icons from Angelina Jolie to Laverne Cox, thanks to her brave public speaking on her tough and ultimately triumphant life story. At the Lincoln Center’s glitzy Women in the World summit in New York, 2013, she pliéed and pirouetted through an exultant routine inspired by her personal history, before delivering an incredibly moving speech describing her leap from civil war survivor to the upper echelons of ballet. “Tom Hanks was crying the whole time I spoke,” she grins, “because I guess he was so touched.” He wasn’t the only one: Jolie, in her role as a UN special envoy for refugees, presented DePrince with an award, before leaning in to whisper that she’d been an admirer for months. In the hallway afterwards, Meryl Streep stopped DePrince’s adopted mother, Elaine DePrince, and called dibs on playing her if a biopic materialised. “I said, ‘But I’m so short!’” Elaine recalls, speaking from her home in Atlanta. “So (Streep) flung her shoes aside, and in her bare feet she wasn’t so tall after all. She said, ‘I can do short!’”

Born Mabinty Bangura in 1995, DePrince spent her earliest years in civil war-torn Sierra Leone, a country consumed by unthinkable horrors. Inflamed by government corruption and a crisis in education, rebels had formed the Revolutionary United Front, a merciless army whose soldiers hacked off civilians’ hands and feet to quash resistance. After soldiers murdered her father, a cold-blooded uncle took in the three-year-old DePrince and her birth mother. He treated them like dirt, flinging the pair scraps of food so meagre that her mum died of starvation. DePrince was dumped in a crowded orphanage. “Was I now nothing more than an orphan?” DePrince writes in her 2014 autobiography, Taking Flight, which was optioned for a Hollywood adaptation by MGM this spring. “I had no one to love me or protect me... no one to think that I was special.”

Things got worse before they got better. Because of white spots on her neck caused by the skin condition vitiligo, DePrince became known among the orphanage’s 27 kids as ‘Number 27’, a cruel ranking system that marked her out as the last to receive food, toys and clothes. Superstitious elders were terrified of the apparent curse – DePrince’s perceived ability to attract death didn’t help – and dubbed her the ‘devil’s child’, dishing out violent and verbal abuse daily.

Soon after arriving at the orphanage, DePrince saw a magazine depicting a tutu-clad dancer blow through the front gates. Fascinated, she hurried to tear off the cover and stuff it in her underwear before the elders noticed. A few days afterwards, she showed the picture to ‘Teacher Sarah’, a short-lived mother figure who explained that the image was of a ballerina. When Sarah was murdered by rebels while heavily pregnant, the tragedy hit DePrince hard – it was Sarah who had reassured her that, in America, no one would care about the spots on her skin. Fearing more attacks, the surviving carers marched the orphans over the mountains to a refugee camp in Guinea, where they would be collected by American families.

“I was overwhelmed in the beginning. I went to the supermarket and ate food off the counter, because I didn’t understand you had to pay for it” – Michaela DePrince

Elaine DePrince had come to Guinea to adopt Number 26, named Mabinty Suma, but instantly fell in love with Bangura, a sulky misfit with huffy cheeks and permanently crossed arms. Flying home with both four-year-olds, Elaine gave them their first outfits, their first showers and, to avoid having two Mabintys run riot in the household, their first names: Mia and Michaela. Bit by bit, the pair’s past began to fade. “I used to be able to visualise my biological mom and father,” DePrince reflects today, turquoise earrings twinkling like fairy dust in the sunshine as we amble towards Amsterdam’s central square. “But now I don’t even know what they look like. And I’m glad. It’s a way for me not to hold on to the past.”

Once relocated, DePrince fell hard for US culture, but a star-spangled assimilation didn’t come overnight. “I was overwhelmed at the beginning,” she recalls, eyes wide with nostalgic wonder. “I went to the supermarket for the first time and ate food off the counter, because I didn’t understand that you had to pay for it. I was scared to believe so many good things were happening to me. I was scared I’d wake up and be in Sierra Leone.”

As her ballet fixation blossomed, Elaine and husband Charles stretched themselves thin to fund DePrince’s schooling, which at one point included an $80-a-day pointe shoe habit. Even outside of lessons, DePrince kept on dancing, sneaking back into the studio to hone her “Oops!... I Did It Again” routine with Mia and their new sister Mariel, another Sierra Leonean refugee. “From age five to seven, Michaela and Mia were obsessed with Britney Spears and Destiny’s Child songs,” Elaine recalls. “I remember a trip to Disney World where they were more interested in the hotel’s karaoke party than they were in the resort.”

It wasn’t so free outside of the practice room. The world of classical ballet, still mired in tradition, meant that DePrince’s race remained a shockingly real obstacle, and the establishment didn’t hesitate to cut her down to size. When she was just eight, Michaela spent weeks rehearsing for The Nutcracker, only to be dropped at the last minute because, as she overheard someone say at the time, “America isn’t ready for a black Marie.”

“I would see people in companies who were just like me, except they were white,” she says. “So I was like, ‘OK, I should audition for this company, they seem to like smaller, muscular girls.’ But I wouldn’t get accepted. I didn’t understand.”

The rejection was hurtful, but through sheer force of will, DePrince succeeded in transforming her athletic physique into an asset. “Sometimes I cry about how my feet are horrible,” she admits. “But I was lucky to be different from the other girls. I always wanted to be very delicate, but my thing was power. Then I realised I could use that power to jump as high as the boys.”

Rather than leaving the past behind, DePrince’s latest dream is to use her story – Mabinty’s story – as an inspiration to dream big, regardless of your background. First up, there’s that big-screen adaptation of Taking Flight in the workd. “I just hope the casting directors choose a little girl with spunk and sparkle,” says mum Elaine. And once DePrince's ballet career ends, she plans to return to Sierra Leone and build a free-entry dance school. In the meantime, though, she’ll continue to delve into her bulging inbox while unwinding between rehearsals.

“Sometimes I can really help people,” she says, lighting up again at the thought of her fans. “If a girl is wondering how to paint her pointe shoes because she’s the only black girl in her school, I can tell her what to do. It’s amazing when people say, ‘I always loved to dance but never thought I could do it. But you showed me.’ That’s what inspires me to continue.” Somewhere behind the megawatt smile of Michaela, Mabinty looks on with pride.