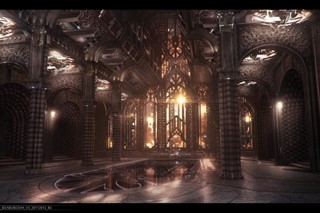 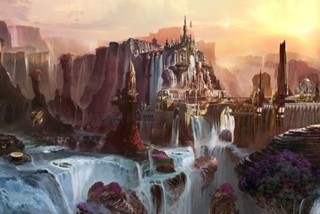 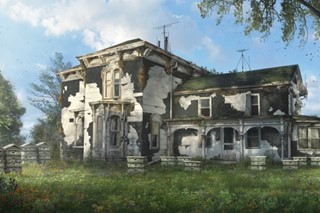 There's no question that writer/directors Lana and Andy Wachowski know how to piece together an entire world. They've done it for The Matrix Trilogy, Cloud Atlas and again for forthcoming SF action adventure Jupiter Ascending. It follows Jupiter (Mila Kunis), one of those down-n-out dreamers with her head in the clouds whose reality couldn't be more different (read: she's a house cleaner). Only when Caine (Channing Tatum) comes to fetch her and give her the rundown of her situ – her genetic make-up puts her next in line for an extraordinary inheritance on a planet far, far away – does this story truly shift from neutral to drive.

To bring this story to life, the Wachowskis enlisted a team of 22 conceptual designers. Grant Hill, producer of the film and long-time collaborator of the Wachowskis, talks through some of the early concept art and inspirations behind the striking environments seen in the film. On melding two skill sets to create the concept art of the film, Hill says: “We put a mixture of familiar concept artists we’d worked with before together with some other people who had specifically worked in just painting and design. We assembled them and got them all working together because, at the end of the day, they are all artists. Lana and Andy gave the orders and it all melted into the sum of the parts. Their combined ideas were integrated into our film world and it worked spectacularly well. It was very effective, the cross-fertilisation of the two worlds.”

“It’s very large and very complex. We wanted this to have a very practical, industrial look below the floor, but keep it slightly gothic, a purpose-built, industrial, very threatening environment. Above the lab, you have this very grand sitting room-type space on an enormous scale that leads to the landing bay. It references in some ways a Pharaoh. We saw Balem (Eddie Redmayne) as a Pharaoh-like character, so there are some Egyptian references.”

“Generally, we wanted to have a couple of consistent elements throughout the design of the movie. One of them was always trying to keep some element inspired by things on Earth, or at least reference them in a way. We chose to base it on Ely Cathedral (Cambridgeshire) because it provided us with a sort of scope and reference, obviously being a very significant UK church. The interior design of that church was so subtle but so spectacular in its own right.”

“Stinger’s (Sean Bean) house is one of the Earth locations. The story is that Stinger has basically been thrown out of his role as a galactic soldier for ultimately standing up for Caine Wise. He has basically exiled himself for a quiet and peaceful life, and we chose a deserted farmhouse about an hour outside Chicago.”

“We spent three months taking that very traditional, plain architecture and built into it the sort of concept of this place being a sanctuary for bees.”

Jupiter Ascending is released on February 6