Dazed went for one last hurrah before the closure of London's always mad, ever-anarchic LGBTQ pub 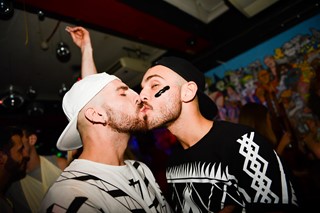 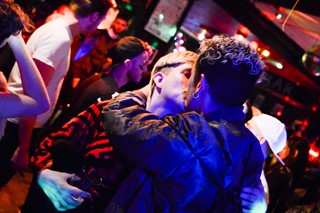 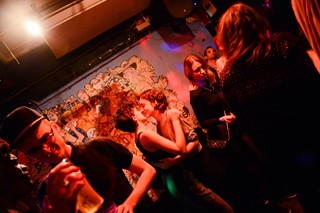 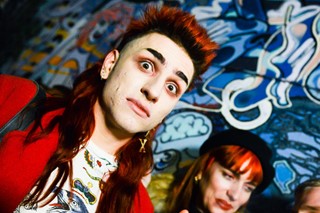 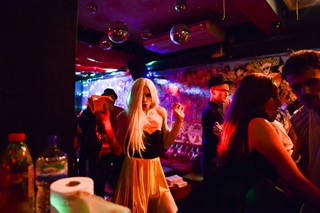 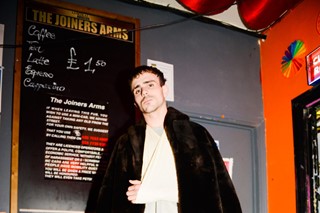 Back in November, it was announced that East London’s most beloved, most anarchic, LGBTQ pub the Joiners Arms was to be demolished to make way for even more luxury flats. Like a real-life psychopathic Redrow advert, the 18-year-old pub has been the latest in a string of London venues facing the wrecking ball at the hands of property developers who are keen to capitalise on the area. Ironically, the very people who made the area vibrant in the first place are the ones who can no longer afford to stay.

Last night was the final time the Joiners would open its rubbery, plastic doors as the pub we know and love. Dazed came down to join all the other bedraggled queens, queers and clubbers for their all-night closing party, which saw hundreds crammed onto the sweaty, amyl nitrate-scented dance floor for a proper send-off.

Getting there at around 7pm, we arrived at the tail-end of a meeting for Friends of The Joiners Arms, a campaign group which has submitted an application to get the Joiners recognised as an asset of community value and set up a "cooperatively owned and managed, holistic/multi-use LGBTQI community centre, which welcomes diversity, challenges inequality, promotes activism, and provides safety, fun, acceptance and support".

Amy, a member of the group, explained that “if our application is successful, it means that they won’t be able to sell this building without us being notified and we’ll be given six months to raise to funds so we can outbid ourselves. But whatever happens, we are all feeling positive. All of these people have come together with this vision of more inclusivity in queer spaces, and we as a group will continue to do something, whether it’s here or not.”

After the meeting, landlord David Pollard came through the doors to an enthusiastic applause, before we all sat down to watch a short film about the pub on the TV hanging over the bar. “Where are we supposed to go now?” asked a local in the grainy, black and white short. “Look what we’re losing… and for what? Money and profit.”

After the film, I sat down for a beer with David Pollard. “I just want some rest,” he told me. “No more arguing.” When the pub closes down next week, he will be homeless. For a man in a wheelchair, who has lived above the pub since 1997, this is a truly bleak situation. “I’ve got some mates' flats I could sleep at but I’m looking for sheltered accommodation at the moment. These past few weeks have been awful, but what this has shown is that we will not go down in silence. People are demanding a voice, and demanding to be heard. The Joiners has shown that the nighttime economy is vital to the health of the community.”

Robobond Ltd, the company which acquired the property over a year ago, disputes Pollard's account, saying that his firm willingly entered into an agreement with them over the surrender of his lease. "He will be paid a six figure sum on January 15," a legal representative told us. "He was given rent-free accommodation for both his private accommodation and the pub itself and freed from his ties to the brewery, enabling him to acquire beer at very competitive prices. It is therefore galling for him to suggest he is being made homeless."

At around 10pm, people started to trickle through the doors until it was hard to move for the next person’s vogueing. Striking, leggy drag queens and dapper drag kings intermingled with some familiar seasoned faces, shady characters and the odd, straight-looking media type who was there for the next-day article. In the toilets, I bumped into Jane, who has been frequenting the Joiners since it first opened (1997; “on the same day the Labour government was elected”).

As the night went on, make-up started to sweat off faces and somebody nose-planted from the stage. One queen vomited into her wig

“For me, the reason the Joiners is so important as opposed to other gay venues in the area is because of the community and what people get from this,” she said. “You can come here and it doesn’t matter how long you haven’t been here or whether you’re on your own or with other people, it’s somewhere you can feel comfortable and if you run into trouble, people notice. There are a lot of people who come here who are really isolated and if something happens to somebody, everyone rallies round and they will help that person. There’s a clearing of all these spaces throughout London and it’s like ‘where do people go?’ What are people supposed to do? It’s all about money.”

Hannah, another local and member of Friends of The Joiners Arms, pointed out that the pub has always felt inclusive. “The gay scene can be a bit exclusionary of women – you don’t always see women around. Good luck if you’re trying to get served at G-A-Y late... But it’s good to be a woman here. You feel accepted in a way that you don’t always at gay nights, or letched on, like at straight nights. But it’s about not just having a space we can get drunk together, but a space where we can debate together and really start to get to the bottom of why people behave in the ways that they do, and how we can change that. The new Joiners would need to have all gender issues and race issues as core values.”

As the night went on, make-up started to sweat off faces and somebody nose-planted from the stage. One queen vomited into her wig. “I’m not going to say anything… not tonight,” said Nathan, a security guard. “And as far as I’m concerned, people can stay for as long as they want tonight.”

Before we left, somebody was overheard sobbing in the toilets. “You know what I’m going to do? Go to these property developers' houses myself and demolish them with my own wrecking ball – a giant disco ball. And I’ll be driving the thing, in my best seven inch heels.”

Read our interview with Joiners Arms landlord David Pollard about the closure of his pub.