Since London-based artist Gabriele Beveridge was shortlisted for the Converse x Dazed Emerging Artists Award in 2011, her career has skyrocketed – leading to a very successful solo show at La Salle de Bains in Lyon, France this year. More recently, she opened another solo show at Elizabeth Dee gallery in New York. We talked to Beveridge about the promised glamour of Gold Diamond Park, her first exhibition stateside, and the inspiration she found for it in Dubai. 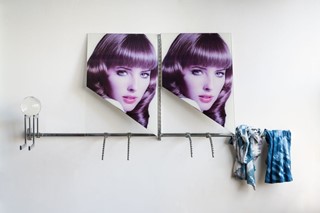 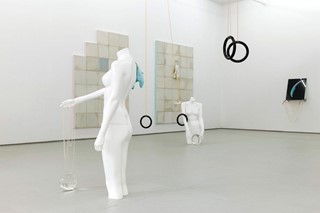 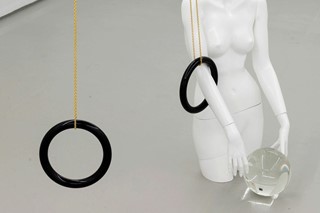 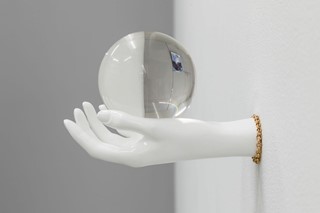 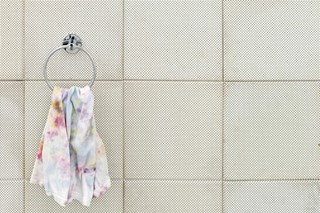 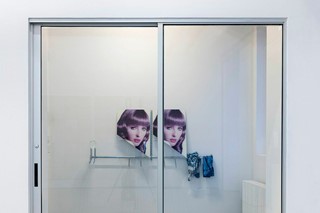 How was it preparing your first show in New York?

Gabriele Beveridge: It was more difficult than I anticipated to imagine the parts coming together in a gallery space I’d never been to. There was a lot of revision that went into it; uncertainties. But I started to find a way to make those uncertainties productive, to use the energy to break works out of their usual state of being just one way, and to imagine them more as entities that had lives, developments and different states they could occupy in time.

Why did you choose the title Gold Diamond Park?

Gabriele Beveridge: The words were on a sign I passed in Dubai once. I think it was the name of a jewellery market. They just stuck. I liked the ring of it but also just the absurdity of these exotic shop names. I liked the promised glamour of a Gold Diamond Park and I wanted to create almost the opposite, a park that was less desirable in my mind, a disappointment. A bit like Dubai itself. That led me to using the distressed ceiling tiles in the former 1970s library in which I live in London. They’re so ugly that they’re beautiful.

Was the city of Dubai an inspiration for the exhibition?

Gabriele Beveridge: I think Dubai was a giant inspiration. The sun-faded images in the show came from there, too. Its a place that’s full of image and representation, but all of it feels like it’s either out of place – literally imported – or else succumbing to the climate, like the images have faded from the sun. It seems ironic, but somehow in the place that’s striving to be so perfect and seamless, you can really feel the forces of globalism shaping the landscape. You can feel these desire projections popping up out of context, ready for the business traveller. I’m always interested in this tension between the idealised image and the experience one has. That psychological charge of the street with all the ideologies and expectations broadcast at you to take on as your subject, your self.

What draws you to the images of stylised faces you use in your work?

Gabriele Beveridge: I’ve always had a taste for these anonymous headshots that stand still in hair salon windows. There is something talismanic and incredibly secretive about them. They’re all about expectation; how one both casts and returns a gaze at once – as in the window they stand in for the ‘new you’ you’re meant to imagine after a haircut or beauty treatment. They’re a promise of transformation. And yet they are the most banal thing, as if they also anticipate this sceptical reception.

They never seem to be familiar faces.

Gabriele Beveridge: They’re never famous models I use. I’m drawn to these depersonalised advertising faces because they act like a kind of mask for the other, as Lacan would say. This unknowable other that’s everywhere around you. It’s always on the edge of familiarity, which conversely creates the uncanny reminder of the distance: “...don't I know you?”. I also find these stylised images to have a certain outside-of-time feeling, which draws on an internalised image world of the capitalist imaginary. These forms which are on their way to becoming solid. Pre-iconic. This near-dream state is always imbricating with the contemporary experience. There are a lot of mechanisms that try and push it away, and you can feel them if you concentrate. So I’m also trying to release that in the viewer.

There’s a magical balance to the installation. How do you approach the composition of the works in the gallery, and what do you want to achieve?

Gabriele Beveridge: The actual balance of things is intuitive and I’m not sure how to describe that. I sometimes feel like my works are minimal in a maximal kind of way. I think for someone of my generation it’s very hard, almost impossible to parse out the influence of artistic movements that I’ve seen in museums and textbooks – the aesthetics of pop, the net, etc. At the same time, I don’t think this is how things are progressing any more, either. So I don’t particularly want to achieve anything in that respect. The individual elements in the works are things that I’m drawn to find meanings and ruptures in. Bringing them together to feel right is perhaps, yes, a bit magical. But don’t you find magic most of all makes you think of how it’s done? If I can replicate that antinomy between revealing and concealing then I’m happy. That’s when it’s personal enough to be for anyone.

Submissions are now open, for a chance to exhibit at the Royal Academy of Arts click here