If you’re tired of gallery booths and bright lights post-Frieze, stroll through a darker park with the legacy of artist Stephen Cripps 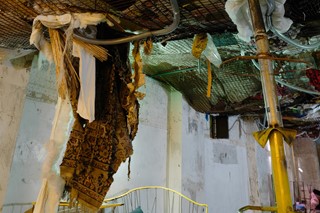 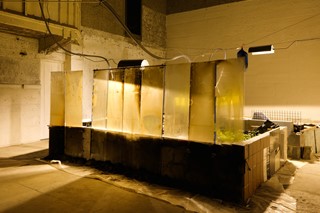 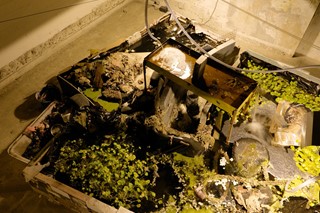 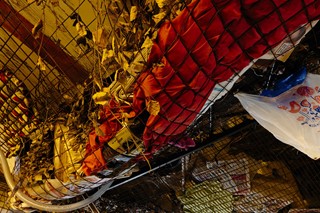 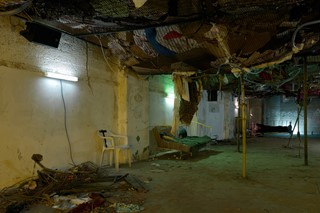 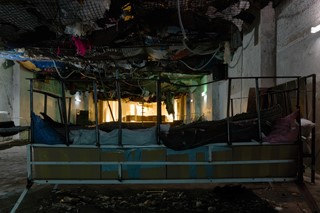 In a 1911 poured concrete church, in a public park in South East London, lies a Mechanical Garden. Mattresses loom overhead above the netted ceiling giving the impression of being inside a toxic cave after the apocalypse, with only the trickling of running water from a pond feature and the dank air as a reminder that there are still organisms alive. A shifting soundtrack features field recording, computer music, and slowed down pop songs mixed by the artists; Richard Sides, Ben Burgis and Stuart Middleton, who reflects on the subterranean strata, “the material decays, it creates a mulch which is rich and which life comes from…a body of water moving around the space…kinesis comes from the sound – the soundtrack operating as an apparition...the peaks in sound have a bodily impact but it’s immaterial.” Elements of this soundtrack are available for download online, providing contextual and parallel contributions from artists and writers, including Laura Oldfield Ford, enhancing the site-specific ‘garden’ that takes the city as its muse. As Middleton goes on to describe, “we applied what we thought could be the fundamental ideas of Stephen Cripp’s mechanical garden [and thought] about what the contemporary equivalents could be; i.e. what is the mechanism, and how does it relate to ideas of a garden? So much waste in the city is now not 'good trash', it is real worthless catshit sodden bed bases and rotten MFI flatpack – cheap carpet from quick, budget buy-to-let renovations.”

Unlike the green idylls or secret rose clusters of botanical imaginings, the mechanical garden is an accumulation of waste, gathered by artists and reformed, re-used and regrown. The metaphor is fitting for a project that has been in gestation for the last four years. Curator and Woodmill founder Naomi Pearce first discovered the late artist and pyrotechnician Stephen Cripps whilst establishing her own artist’s studio organization and complex at Neckinger Depot in Bermondsey.

Researching the history of artist run spaces and artist networks in the area, she discovered Cripps and his colleagues at Butler’s Wharf.  Their social collaboration methods and attitude toward artistic production struck a chord, and leafing through his archive, she discovered a drawing of his never realised “Mechanical Garden”. As she notes, “I saw an affinity in the attitudes of some of the artists I was working with at the Woodmill. There were also contradictions in Cripps' practice that I found I was interested in, on the one hand it was spontaneous, ephemeral with an almost reckless regard for the art object, for any sense of permanence. And yet, on the other hand he kept all his drawings, he preserved them; there seems to be an awareness of a potential legacy. I wanted to know more about why he treated these materials (the drawings and performances) so differently and how they informed one another.”

Cripps is an underground figure whose work is currently being reignited by a generation interested in his approach to making and showing work. The Henry Moore Institute held an exhibition last year suggesting, “Cripps used drawings to develop and describe his ideas: some of these were realised as unpredictable events and ephemeral installations, whilst others remained full of potential on the page.” It is this potential that the group of young collaborators have tapped into. His wide ranging work encompassed automotive kinetic sculptures, pyrotechnic ‘fireworks’ performances and a fascination with urban debris. He worked closely with the percussionist Paul Burwell and produced a performance where they let off explosives in a room full of expensive paintings, he also designed sets for two productions by Steven Berkoff. Now, 32 years after his death, his garden has come to life. It may not be exactly as he had imagined – but this is because the focus of the project has been on inhabiting the processes and remaining true to a spirit of Cripps rather than simply recreating the vision in the drawing.

The project isn’t ‘curated’ in the way that the term is flippantly used, and as Pearce expands, “selection isn't the right way to think about how it came together”. The installation, audioguide and day of activating performances all come back to the same root.

The Woodmill has been operating in Bermondsey for over four years, and have come to know the public and the people. The location in Dilston Grove - within a public park - is key to the project not being seen as an isolated artwork, but part of this embedded working. Through discussion, research and the practical task of ingesting Cripps' thinking, the contributors react, reform and embody it within their process, “the voices closest to Stephen were heard and could have conflict with a younger generation of voices who could only encounter Stephen through the mediation of the archive,” Pearce suggests.

The resultant installation feels fresh, it is not a set nor a harking back to a bygone age of art-making, but an accumulation of methods; the medium is not simply ‘swamp, audio, old mattress’, but collected field recordings, waste, and experimentation of both materials and sound. Being from a generation defined by an excess of influence, the installation also owes to associative thought processes from The Cabinet of Doctor Caligari (1920) through to steam punk and anime backgrounds… but ultimately, as Pearce explains, “the project is about the city [London] – not really about artworks”.

As if in some parallel reality (some dark underworld) – the bowels of a ship or the engine room of a steam train – this garden bubbles up to the surface, through the layers of London Clay and up to face the strolling walker. This tangle of industrial wreckage, objects of daily use that once lay discarded are like the graveyards of airplanes as painted by Paul Nash: “the great inundating sea”. Whereas these casualties of war languished in defeat (a symbol of some kind of victory) this stricken assemblage of broken domestic objects – not shot down from the sky, but made wonky by misuse – are not dead, but merely sick. You nurse them; they are transformed, transplanted, ready to wake up anew in a metallic Babylon – Naomi Pearce, A Letter To The Late Stephen Cripps, Pyrotechnic Sculptor and Butler’s Wharf Resident From 1974 – 79.

The Mechanical Garden and Other Long Encores is on until Sunday 26 October at CGP London, for more information click here.