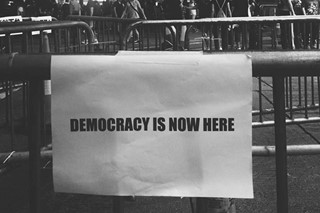 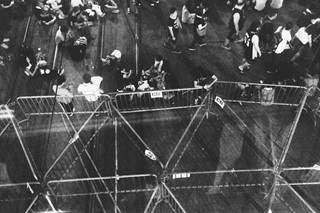 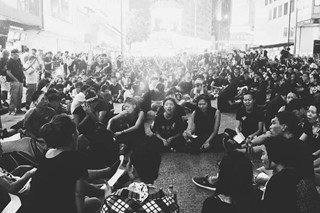 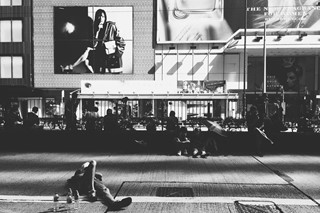 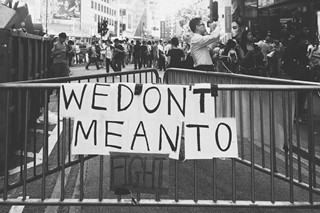 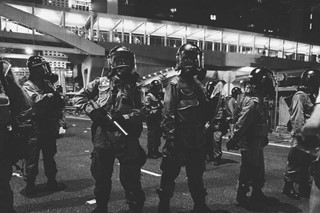 Hong Kong’s student protesters are putting the civil back into civil disobedience with a citywide demonstration that is well-supplied, courteous, organized and most importantly peaceful. This is probably the most non-violent demonstration with the nicest protesters that this world has ever seen, despite the clashes last Sunday when police pepper sprayed and fired tear gas on unarmed civilians. The situation has calmed since then, and it didn't stop an estimated 80,000 demonstrators from taking to the streets today on China's official National Day. If anything, the official police response has created feelings of community, comradery and solidarity in the growing crowds.

Students are distributing food, water, umbrellas to block the sun and rain, cooling pads and medical masks in case of another tear gas attack. Medical tents have been set up to take care of those suffering from minor wounds, heatstroke or just if someone needs contact lens solution. And when the trash starts building up, volunteers come around to pick it up and even separate plastic bottles for recycling. Students and activists have chosen not to give the government any excuse to shut down their protest, which calls for universal suffrage and the resignation of Chief Executive CY Leung.

For those not familiar with what is currently happening in Hong Kong, here's the short version. After the handover in 1997 from British to Chinese rule, Hong Kong was granted a high degree of autonomy under what is called a "One County, Two Systems” policy. The city was promised universal suffrage at an unspecified point in time, but right now, the head leader of Hong Kong is chosen from a 1,200-member committee with many Beijing loyalists – and that’s a major problem.

To make things worse (not to mention inflame already growing anti-mainland sentiment), Beijing released a document in June called the "White Papers", which essentially reneges on the initial handover deal. This, combined with the increasing public dissatisfaction toward the Hong Kong government for failing to protect its citizens' interests, has caused a student uprising – now dubbed the Umbrella Revolution – organised by Occupy Central activists, the Hong Kong Federation of Students and another student group known as Scholarism. The latter's leader, 17-year-old Joshua Wong, has become the face of the new movement. He's said that "20 years later, they we’ll remember that we’ve made this stand."

At the moment, protesters have reached a stalemate with the Hong Kong and Chinese governments. But that hasn’t quelled their spirits. In fact the demonstration has gone global with New York City, Vancouver, Brisbane and London joining in. Within the city, protesters are now blockading roads at five different districts.

"The voices of minorities need to be heard and one way to achieve that is through democracy," says Henness Wong, a 25-year-old who has stayed overnight to help as a medical volunteer. "Right now there isn’t representation for those that need help the most in Hong Kong. My parents don’t agree with what I’m doing and they think it’s to the detriment to economic growth of the city. But I think this is short-sighted and in the long run, if this is a city that can celebrate all the voices of its people, the city can actually grow even more."

As Wong noted, there is a generational divide when it comes to this movement. Many in the older generation, like 71-year-old Mr Chan (he wanted to remain anonymous), think the students are being foolish and manipulated by political activists.

"It’s no good," says Chan. "It’s causing such an inconvenience with traffic. Democracy is great, but China is not going to have it and there won’t be any international interference because all the industrial countries like the US, England and Japan depend on China. These kids are just being used. They should just take care of yourselves, marry and have kids."

There are, however, older supporters as well, like 60-year-old retired sociology teacher Rosetta Ng. "Don’t these parents want their kids to have better than they have?" says Ng, who has been to the rally every day. "What they are doing is suppressing them to think freely for themselves. And they do this for their own selfish reasons. I think it has too much to do with the Chinese tradition of filial piety. What your elders say goes. But these young people have a mind of their own."

“When you look at history, a lot of change and social movements come from students” – Yukiko Lui, student

44-year-old Leslie Law agrees: "I like this movement the most because I used to have an impression that the young generation only cares about money. But this movement gives me hope. These students have ideals and they are fighting for them."

"When you look at history, a lot of change and social movements come from students," says 17-year-old Yukiko Lui, who is the co-president of the Amnesty International club at Pokfulam's West Island School. “Just look at the Russian revolution or the civil rights movement. Young people are aware and to say that students are being brainwashed is extremely condescending."

There is a clear resolve in the air just as National Day ends. A collective social conscious has developed where protesters see value in their solidarity, even in the likelihood that CY Leung won’t step down and universal suffrage won’t be achieved. But now the fire's been lit; a new generation of Hong Kongers feel a strengthened identity. And they have a clear idea of where they want to take their city.