David Tartakover has defined graphic art in Israel for 50 years: but his most crucial work has been as thorn in the side of authority. Here, we profile the tireless peace activist at home in Tel Aviv

This Sunday it's International Peace Day, a project set up in the hope that September 21 will become an institutionally recognised day around the world. Founded back in 1999 thanks to Peace One Day and the United Nations, the aim is simple, to create "an annual day of global unity, a day of intercultural cooperation on a scale that humanity has never known". All this week we'll be raising awareness in the hope that this Sunday will be the biggest Peace Day yet. Today, we're looking at creative solutions for conflict resolution, from the Godfather of Israeli graphic design's endless battle for peace to the Syrian artist-journalists looking to document the real-life of their war-ravaged country.

David Tartakover was born into a pre-state Israel in 1944. Now aged 70 he has seen and lived through everything that has happened – and more than anyone else he has shaped its social, cultural and political identity through art and design. Yet in a place as politcally-fraught as Israel is – the nerve centre of the world’s media – Tartakover remains one of very few Israeli artists to confront politics in their work. Apart from a brief stint in London in the ‘60s, where he completed a degree at the London College of Printing (now LCC), Tartakover has never left Israel. In many ways, he is the archetypal Israeli, thrashing between waves of independence, loyalty and and nationalism, clinging to the broken mast of his enmity of the occupation.

He could easily have fled – witnessing too much blood and brittle hope crumble into dust with the buildings blown-up over the turbulent decades since his nation’s genesis; but part of his protest has been to stay and create. He has been a prolific creator and activist. Seminal album covers, posters, slogans and logos, bienales, museum shows and awards, including the state’s highest honour, the Israel Prize, which he received in 2002. “David Tartakover is a true pioneer and courageous Israeli peace camp artist,” states Ido Shemi, an artist and Godfather of Israel’s subculture scene. “He expresses the left wing messages through posters and stickers, using his position to impart his political views without any fear. He is always fighting for the moral character of the State of Israel". 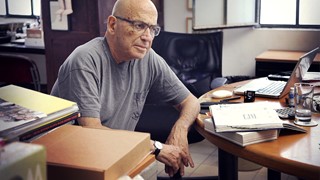 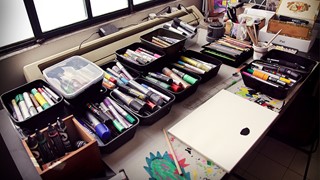 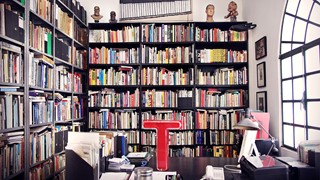 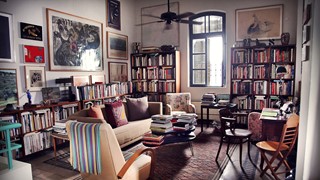 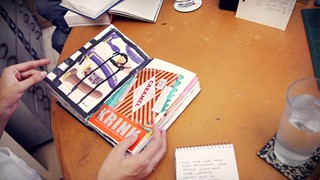 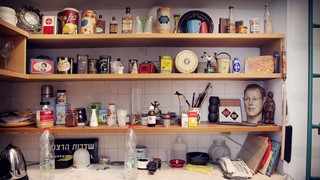 Not only was Tartakover responsible for introducing Graphic Design to Israel in the ‘70s, (when he began his career working at Israel’s first Television channel) but he was one of the first to use it as a vehicle for voicing political concerns. The story of the work he is best known for – the logo he gave to Peace Now, the most prominent peace movement in the Middle East – illustrates how he merged cultural and political aims.

“There was a national poster competition for 30 Years Independence Day in ‘78. It was the first year of [Menachem] Begin’s regime, before President Sadat [of Egypt] came to Israel. They were looking for something traditional, nationalistic. I had one word to send them: Peace. I sent this poster to the national competition, and they gave me 3rd prize. Since I won 3rd prize, the poster was shown to the all the government ministers. In Jerusalem, they didn’t want to use it. They refused it. But I told them I would not change it, and in the end, it became the official poster [for the 30 Years Independence Day].”

In 1978, he added the word ‘Achshav’ [now] to ‘Shalom’ [peace], for a poster for a mass rally for peace in Tel Aviv. It was a pivotal moment in Israel’s history: that first Peace Now protest of ‘78 became a movement, keeping the name and logo Tartakover had created. Suddenly, design interacted with politics – and the logo became the first and most recognisable political bumper sticker in the country.

The iconic "Peace Now" logo went against everything Tartakover had learnt about design in the UK. Combining two typefaces, “Shalom” in ‘Koren’ – a holy, biblical font – and “Achshav” written with ‘Haim’ – modern and secular - it was a simple and effective union of opposites, and it powerfully engaged with the demand for a peaceful two-state solution; the black and red colours further implement its force.

Tartakover’s world is a reflection of a dystopic reality. “My work is often considered a protest. It’s not. It’s a reaction.” Would you ever tone things down to placate the mainstream? "Never. You have to go with the truth, all the way – otherwise, what have you accomplished?”

Developed over forty years, Tartakover’s style is about minimal compositions, that reappropriate images taken from the media, which he cites as the main source for his work, and mix them with slogans and text, inspired by Russian Constructivism. Mixing pop and high culture, most of his posters have been self-funded and distributed. “The poster is my favourite medium. They are cheap to make. I love paper and print. Posters are a direct tool to convey any message. They are out in the streets, and that is the best place for the work, where a lot of people will see it. But in recent years posters no longer have this rogue attitude. They have been gentrified – they are part of the urban scene, the barbaric billboards we pass when we go to work in suburbia…”

Like many Israelis, Tartakover has suffered bitterly at his governement’s reprisals, and he sees a cultural decline as a result of an unstable political situation. In the '90s, there was a short-lived period of euphoria after the ’94 peace agreement with Jordan was signed, coordinated by Rabin. But Rabin’s assassination the following year – while he was working on the Oslo agreement – was an immense tragedy for the left in Israel. It was at this time that Tartakover began to make works about Benjamin Netanyahu, then head of the opposition. Bloodthirsty videos online document how supporters of Nethanyahu called for Rabin’s end, labelling him a traitor. Netanyahu became a kind of nemesis for the artist. In a Manichean response to the situation Tartakover pastes Netanyahu’s face against the slogan “We Will Never Forgive”, next to an image of Rabin who appears with the words “We Will Never Forget”.

Arriving in Israel in the pulsating heat of August, the war was still raging in Gaza, and the right wing inside Israel had become increasingly violent in both the physical and virtual world. While opinion polls now say the majority support the war, at the same time, they show that the public don’t think it will make any difference to the situation. It’s hard to be hopeful about a peace process being realized. Diminished by so many failures, the public vacillates between insidious fear and a lack of faith in the Israeli and Palestinian governments.

“Israel is making all the mistakes it can do, the situation is stuck. I don’t see any vision in my country, I see efforts to keep the power.” – David Tartakover

“The right wing has more power now, with more enthusiastic voters, who believe they are doing the right thing.” So how do you keep going in this place, in this atmosphere where there is no hope and no faith? – “It’s the only way to live, either there’s going to be peace, or there’s going to be a living hell.”

Though Tartakover describes his work as fundamentally “humanist”, his approach has always been emphatically local. Texts and slogans are predominantly written in Hebrew. With his ‘Produce of Israel’ exhibition at the Tel Aviv Museum in the mid ‘80s, he revived the concept of a modern Israeli identity, designed his version of the ‘sabra’ fruit (prickly pear) – a symbol that refers to the stereotypical Israeli Jew born in Israel. “Israel is not America” – screams the slogan of another influential work.

Creating a local ideology is still a pressing concern in Tartakover’s work. He confesses he’s a fanatical collector of Israeli ephemera. He published a book of his collection, Where Have We Been and What Have Done as a statement about localism, that rebuts a homogenous international style and aims to preserve an Israeli visual culture that was vanishing – and in doing so, to create a collective Israeli memory, to restore the Israeli ideology.

“The image of our culture is important to me. My work is directed at the majority of Israelis, they are my target audience. I have always been Israeli, my work, my language, my cultural background… but Israel is making all the mistakes it can do, the situation is stuck. I don’t see any vision in my country, I see efforts to keep the power.”

Tartakover has attempted to give Israel that vision that he sees so lacking in its leaders. Finding an authentic voice for the local in his design is paramount in both his aesthetic and in his message. His latest project is a scrapbook, which he intends to publish as an edition and present alongside an exhibition in Tel Aviv next year. It is a visceral collage book, compiled of business cards, candy wrappers and call cards of topless women (a lot of topless women). Its title is ‘Between Wars’. When he began making it, he didn’t know there would be another war, but the title is as Tartakoverish as ever: poignant, pessimistic, and piercing to the core.

Today he feels he has little left to say: he has often said he belongs to a disappointed generation. He has seen many friends, peers and fellow activists pass away. His efforts have been made from the heart, but they seem to have been frustrated: he says he sees no successors to his work in the emerging generation. Unga, of Broken Fingaz, one of Israel’s most prominent young art collectives suggests there is a reluctance to produce political artwork, “I wish there were more people in our generation like him – bold enough to go out and speak the truth the way he does. It’s definitely inspiring us to react to what’s going on around us. The depressing thing is how relevant the work he made 20 years ago still is today.” So what can the next generation do to propagate change, to make sure the future will be better?

“Young people are not interested in politics. I can’t see that changing unless something dramatic happens. Their activity now is personal, from music to the news they follow, if they do. In the ‘70s we went to every demonstration, every protest drew a big crowd. Now you hardly see young people involved. They do not go out into the streets. That is the only way of moving into action.”

Tartakover’s story is the story of Israel. It’s a complex and painful story of the personal and collective conflicts of being Israeli. He’s been disillusioned by government failures, and has seen periods of euphoria obliterated as peace agreements have collapsed into the ugliest hatred and wars. He has grown tired of it all. But one crucial Tartakover message is still brilliantly clear: “Peace is universal. It comes above everything.”