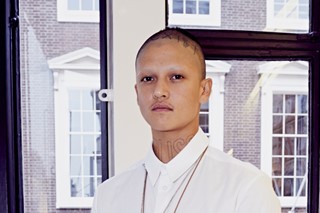 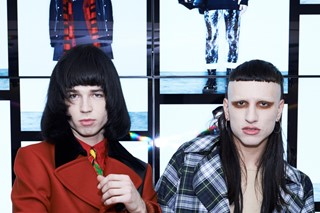 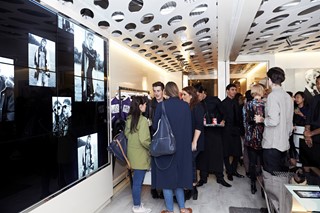 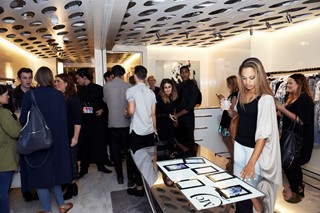 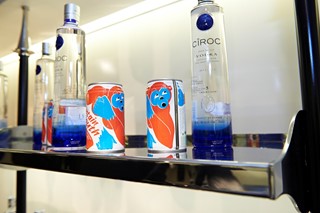 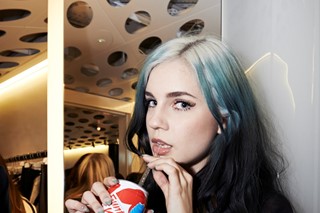 “People ask me where I buy certain body parts and how I get them on,” quips performance art radical Boychild on her disregard for categorising herself through gender. “I’m like, ‘Oh, I just wake up like this’”. A long way from middle America’s “dingiest drag bars”, she’s busy preparing for an upcoming performance at Amsterdam’s prestigious Stedelijk museum, as well as clubbing mecca Berghain in Berlin. By using her body and glitched out make-up as a communication tool, the iconoclastic artist’s rap sheet includes a current film collaboration with multimedia polymath Wu Tsang, as well as a supporting role on Mykki Blanco’s tour last year. The third in a series of four events hosted by the McQ store on London's Dover street – with special thanks to Ciroc vodka and Fountain of Youth coconut water – below, we chart the top ten moments from last week’s otherworldly talk.

"One way that I can relate to movement and image and what I do in my performances (is through lighting). It’s really about creating or evoking certain emotions that I can’t with words, which has always been a very difficult way to precisely tell a story or create the things I see in my mind. It’s like this language that I had inside of me to explain these emotions in a way that words couldn’t. Through technology, especially photography, there’s a way of literally putting a moment or a subject in a box and those movements are my way of expressing the frames."

"I never thought I would do this. It was such an intrinsic need that I had to do it. I didn’t realise it was happening until it happened. I grew up in Sacramento, California which could be renamed Medium. Everything was drowning in blah. I started performing in the dingiest drag clubs in San Francisco for free as much as I possibly could. Drag lit this fire that turned into a fucking bomb. It’s been really magical to see that fire and hone in on it, become inquisitive about its nature and use that to create something more specific."

The rules of gender

"People ask me where I buy certain body parts and how I get them on. I’m like “Oh, I just wake up like this”. To me, gender is this word that people use to explain this thing. I usually am almost ass-naked when I’m performing and people will still give me one gender or the other, and I think that’s really cool and interesting. Maybe my gender is one of the most obvious ways that I present myself using the word fluid, but that to me is the tension of my body in this generation. My work isn’t about gender at all and I think that’s actually the most important thing about my relationship to gender, that it’s not about that. It’s really about lots of things. It’s more about connecting with humans."

"Last summer I was touring with Mykki Blanco and we’d be in three or four countries in one week. I think that was the point where I started to do the same make up twice. Then three times, then ten times. But before that point I was really set on never doing the same make up twice – which is insane! It was always: this lipstick goes here and that mascara goes all the way down the cheek on this day, and then it goes up the forehead the next and then I’m done with mascara. It’s very spontaneous, actually. It’s like my face is a notepad, even my body sometimes."

"I think that pop music always speaks so loudly to its generation. For this film (with Wu Tsang), we're in the process of creating a pop song for me to perform to. Pop music is actually so emotional, they’re like scents – that winter after that break up or that club night, the first time I did molly. They’re just like specific moments. I think that’s what I love about pop music."

On her upcoming film

"It’s been about a year now and I don’t feel like I could move that way right now, I don’t think I could do my make up that way right now. I’ve changed so much but it’s also kind of the first time that I’ve really looked at myself move or perform. I was forced to. I had to confront what I was doing for the first time in that depth and that’s been so cool. I feel like I’ve grown so much from that process. It’s really cool because you can spread out the moment of a live performance over a certain time."

"There’s a really cool side of doing drag because people aren’t thinking about it at all. It’s so funny to find myself in these art institutions because I always felt very excluded from the conceptual art world, because I think my work and my performances are so sincere that I never thought I would have the opportunity to do that. It’s really nice because you have a space and you have time and maybe a little bit more money, and then you have the attention."

“I don't mean to be as shock value as I’ve realised that I am in the club, but I love that. It’s very intimate and I feel like I have this visual when I’m performing” – boychild

"I don't mean to be as shock value as I’ve realised that I am in the club, but I love that. It’s very intimate and I feel like I have this visual when I’m performing where there’s those light tubes that are in Donnie Darko and I feel like I’m sharing those with everyone. Maybe that’s a little hippy for you guys, but if I’m emotionally connected and driven then I could do the same performance in the same building over and over, but the people that come in will totally change my performance. I can feel you guys in this way that it will change everything, even if it looks exactly the same in a photo."

"The collaborations that I’ve really been getting into is Krit (Korakrit Arunanondchai) and Wu (Wu Tsang). Those are so fruitful because I don’t know how to do video, I’m not a director. I’m a performer. I’m really good with still images and light but working with other people is the only way to build huge projects, at least for me. Nothing you see in the world happens with one person. One person might take credit for it but I think that’s the beauty of collaboration – the people that you don’t see are so important."

"I’m really obsessed with boundaries right now. In my personal life it’s really hard to set boundaries, and I think when it comes to performance it’s just really about creating a world that’s a fantasy. I wouldn’t say that it isn’t in my own language but it’s just about being in this other world with our souls or something. But then there’s a thing where people grab my boobs when I’m performing and I’m like “Yo! That’s crossing the boundaries”. But that’s also part of it. No, I’m not putting myself out there in that way but then I am because when I perform in front of people, you have to accept that truth that people are going to do some fucking whack ass shit."