As Minister of Culture for The Black Panthers, Emory Douglas’s revolutionary art was a key part of the push towards black empowerment. His legacy has been forgotten – until now

Taken from the November 2007 issue of Dazed & Confused:

In the late 1960s, America was not a place to be black. After centuries of slavery, segregation and political assassinations, the ghetto’s unemployed masses were subject to constant surveillance and harassment. It seemed that nothing short of a revolution could redress the balance. Juxtaposing the cultural symbols of white America with a new black empowerment, musician Gil Scott Heron promised that the revolution “will put you in the driver’s seat”. As Heron predicted, the revolution was never televised, but in the work of Emory Douglas, Cultural Minister and revolutionary artist for The Black Panther Party, it was visualised, and it sought to realise the Panther’s promise of “all power to the people”.

“As a kid growing up in the early 60s, you saw a lot of African Americans having dogs set on them and receiving beatings. All these things played into my awareness of wanting to do something – which was highly frustrated.”

Until recently the work of Douglas has been largely forgotten. Emory’s work has never been taught in art schools or displayed, framed and catalogued in galleries. But then the art gallery was never Emory’s domain, even when his creativity was at its peak – the ghetto, not the gallery was where the people viewed his work. It was pasted on the walls, in storefront windows, on fences, telephone poles and booths. Passing buses, alleyways, gas stations, barber shops, beauty parlours, laundromats, liquor stores and the very huts of the ghetto itself provided Douglas with his platform. It was art of the people and for the people. It was there, as the pioneering gay black writer James Baldwin claimed all art should be, “to disturb the peace” – to trigger a new consciousness, a new anger at the situation in America and a new hope in the collective mind of the black community. Douglas portrayed poor black people as proud and empowered for the first time, ready to carve out a better future. The ideas he articulated – like equal opportunities – were seen as extreme but his task was to make such “radical” ideas seem both normal and possible. Douglas crucially addressed himself to the oppressed – not the oppressor. He did not illustrate slogans that made requests like, “Jobs for all now!” His were defiant, self-determining lines like, “They bled your mama, they bled your papa, but they won’t bleed me.”

Emory, now 66, recalls his formative years from his Californian home. “As a kid growing up in the early 60s, you saw a lot of African Americans having dogs set on them and receiving beatings. All these things played into my awareness of wanting to do something – which was highly frustrated.”

In the mid-60s, riots sparked in Detroit, Watts, Harlem, Rochester, New York, Jersey City and Philadelphia. In order to maintain “law and order” the police came into the ghettoes, but their methods were little short of brutal. “They were just like an occupying force,” Douglas says. “The police came into our community in military formation. They didn’t come in to investigate or to help. They came in for information, to make sure that they could control and dictate. I had heard of some brothers who were in the community patrolling the police – but I didn’t know who they were.”

At the time, Emory was a 22-year-old student involved in BAM, The Black Arts Movement, who had trained in printing and commercial art. It was when he went to a meeting to discuss bringing Malcolm X’s widow to address the Bay Area community, that he first recognised the extent of what Huey P Newton and Bobby Seale, the founders of the Black Panther Party, were envisioning for the black community. Not merely self-defence – by any means necessary – but also serving the interests of the community. “They informed and educated the people around the issues... articulating them in a way that even a child would understand... survival programmes, education programmes, free breakfast programmes for children – they were dealing with progressive politics.” 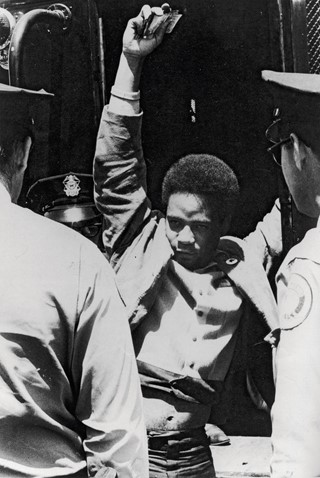 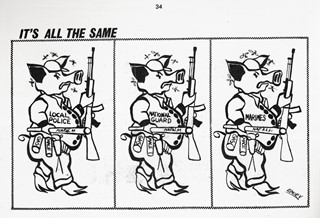 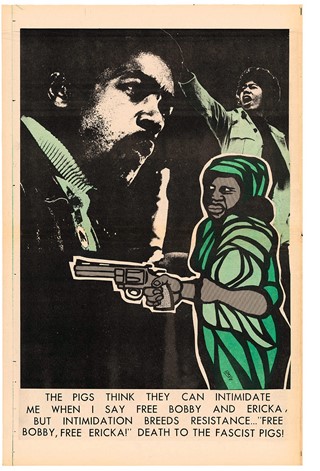 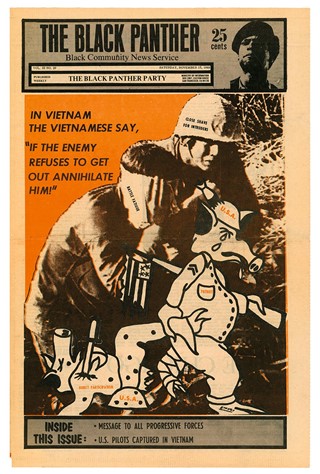 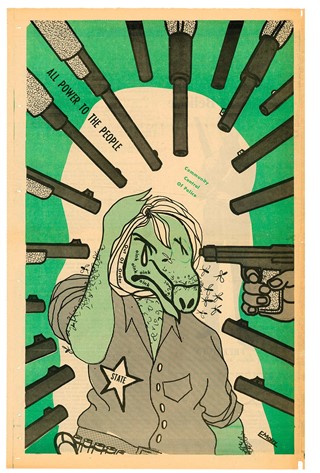 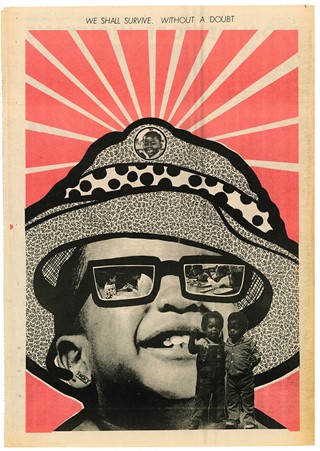 His involvement with the Black Panther Party and its newspaper quickly followed. “There was a place called the Black House, Eldridge Cleaver used to live upstairs and Marvin X had cultural activity going on downstairs,” recalls Douglas. “There were people like Sonia Sanchez coming through there regularly. One evening I came by and Eldridge, Huey and Bobby were downstairs at a table... trying to put together and design the first issue of The Black Panther.” Emory told them he could improve the paper with some materials he had. “So I left and came back. They were surprised when I came back.” Deciding to set up the paper as an ongoing concern, the Panthers asked Emory to direct it and use it to work out the vision of their 10 Point Programme. “They wanted revolutionary art,” explains Douglas. “I would be the revolutionary artist.” Emory did not disappoint. At its peak in 1970, The Black Panther had a weekly circulation of at least 139,000 and Emory’s work was reprinted and pasted up across the African American community. His posters were everywhere, raising new consciousness. But with the success of The Black Panther there came ever-escalating attempts by the government to shut it down. J Edgar Hoover, then the director of the FBI, declared the Panthers the greatest ever threat to US security and his Counter Intelligence Programme Cointelpro kept Emory under constant surveillance. The FBI contaminated print facilities and even convinced United Airlines to cancel the paper’s bulk mail discounts. Emory, like the other Panthers, was subject to constant harassment and search without warrant. In 1969 alone, 27 Panthers were killed by the police and at least 749 arrested.

“Huey and Bobby defined the police as pigs. It began to take off as a symbol – symbolic of oppression – it soon transcended the community and went national ”

Perhaps Emory’s most enduring legacy to American culture is driving home the association between “policemen” and “pigs”. As the poet Sonia Sanchez wrote in a poem which Emory was to illustrate, “A policeman / is a pig... and / until he stops / killing black/people / cracking open their heads / remember. The policeman / is a pig. (oink/oink).”

“Huey and Bobby had defined police as pigs.” Emory recalls and his job was to make that association in print. His illustrations began as simple pigs, bearing the badge number of whichever policemen were harassing and intimidating the community, but Emory developed the idea until his pig was stood up on two legs and dressed in a uniform, replete with badge, gun, snout and tail. “Thereafter it began to take off as a symbol in the community – symbolic of the oppression – and it soon transcended the community and went national.”

Always internationalist in outlook, the Panthers provoked more controversy when they stood united against the Vietnam war, even offering to send Panthers to fight for the Vietcong. “We were opposed to that war just like people today are opposed to the war in Iraq,” says Douglas. “The Vietnamese never called us 'nigger'. They weren’t the ones who denied us the privileges of white America so they weren’t the enemy – the enemy was within the country itself.”

After its early successes in the late 60s and early 70s, the Black Panther Party went into decline. With Eldridge Cleaver and other Panthers in exile, and Huey P Newton and yet more Panthers in jail or facing trial, Cointelpro did its best to exploit internal contradictions within the party. “You have to understand that we were very young and you could say that sometimes we were very arrogant,” Douglas explains, “but we also had the insight and ability to adapt.” However, as time went on, with increasing sabotage, infiltration and the spread of misinformation, the Cointelpro whose “primary dynamic” was to destroy the Black Panthers was achieving its goals. The party and its paper was finally disbanded in 1979. Since then, not all the Panthers have gone on to as happy an afterlife as Emory, who now has two grown-up children and is becoming sought after in art circles. “Huey is a symbol of tragedy and is demonised,” says Douglas, “But when you talk about addiction to drugs, it’s a disease. At that time there was mass experimentation going on with drugs in this country. At the same time you had a lot of ideas. So it was a recreation but at the same time it was an addiction – and addiction can create chaos and turmoil.”

When I ask if he feels nostalgic for the times he lived through, he replies, “No, because you have to deal with the now. What was, is just a memory.” But the power of his drawings provoke more than memory. For those who were never there, they communicate pure pride. The Black Panther party may have disbanded, its newspaper may have ceased to print – but Emory’s work lives on and in its time it really did give “all power to the people”.