In 2014, Aaron Koblin’s future art is catching up with everyone else’s present. Almost. A Santa Monica-born, San Francisco-based designer and digital artist, Koblin uses data to reflect on sociocultural trends and produce art that can reflect our always-shifting relationship to technology. Working at the intersection of the science and art worlds, he has collaborated with everyone from Arcade Fire to Radiohead. Most notable is his continued collaboration with music video director Chris Milk, a teaming-up that produced The Johnny Cash Project. Currently showing as part of the Barbican’s Digital Revolution exhibition, that project is an ongoing collective tribute to the late singer, inviting participants from around to world to contribute drawings and help in creating Cash’s final (and yet never-ending) video. Heading up the Data Arts team at Google HQ, Koblin is well positioned to discuss America today. And yet, more than just being behind the scenes at our epoch’s most defining corporation, it is Koblin’s infectiously humanistic approach to new technologies, in life as in his art, that places him as one of the most important digital creators we have. We caught up with the artist amidst the commotion of the blockbuster exhibition opening – and believe us, this is art that brings the noise – to discuss being optimistic, high school mohawks and the (not-currently-so) good old USA. 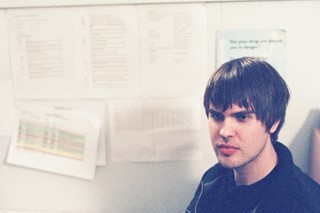 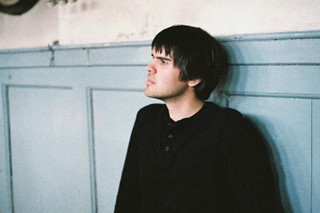 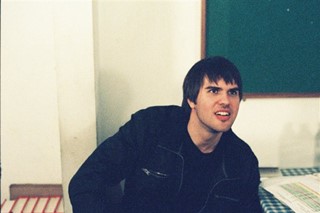 Which living American do you most admire and why?

Aaron Koblin: The second you said it Obama popped into my head but it’s the typical response! My main reasons for admiring him are just for dealing with that insane position that he’s in. But there’s a guy named Ram Dass, who’s this totally psychedelic crazy bastard from the 60s. He had a stroke but he somehow managed to overcome the situation, and he wrote a book called Be Here Now. He’s just like the ultimate master of his own being in the present.

Which living American do you most despise and why?

Aaron Koblin: I need to do more research into whether these are really valid feelings, but everything I’ve heard about the Koch brothers and everything they stand for in terms of their ultra conservative destruction of our government. There’s not anything much to admire there. I try not to think too much about whom I despise, though.

Aaron Koblin: I was going to say Karl Marx but that’s just too horrible! Maybe Carl Sagan. It would be totally the wrong way to recognize that guy. If you get put on money its kind of both a blessing and a curse, right?

What is your favorite quote about America?

Aaron Koblin: Doug Aitken has a book about America that’s just filled with priceless insights. I’m not recalling anything specific  – actually, they’re more visual quotes than language based quotes. It is about the West specifically – The Idea of the West? Wild West, maybe it’s called.

Aaron Koblin: No. Hey, maybe Will Smith should be on the hundred dollar bill. That would be much more fitting.

When and where were you the happiest?

Aaron Koblin: Kind of an intimate question! Let’s just say it was in bed.

What high school clique were you in? Do you stay in touch?

Aaron Koblin: I wasn’t. I did not fit in. If I had to be forced into one it would be punks. A big mohawk, but I wasn’t even closely involved in the punk group.

What food reminds you of home?

What smell do you associate with the city of your birth?

What's the best road trip you've ever been on?

Aaron Koblin: I’ve done a lot of really good road trips. The best was the South of France. We started in Barcelona, and went all the way down to Monaco. Really amazing.

Where did you first fall in love?

Aaron Koblin: On a bridge, in Locken Yada – it’s a place near Pasadena. This little forest. I was 14, it was by a stream. Big Red gum. Ha.

What would make you leave America forever?

Aaron Koblin: There are a lot of political possibilities, there – if things continued the way they’re going. There’s a certain optimistic hopefulness that you have to maintain, at the moment. Various forms of warfare and cultural demise would make me leave.

What noise reminds you of the States?

What is your favorite American building?

Aaron Koblin: First one that comes to mind is the Transamerica pyramid in San Francisco. Because it’s such an icon of that city which I consider home now. But the Flatiron building is more iconic, in some ways.

Aaron Koblin: The Endless Summer. Anything by Quentin Tarantino.

Aaron Koblin: I don’t even know what counts as slang anymore!

What law would you change or invent?

Aaron Koblin: There’s a project right now called May Day, which is Lawrence Lessig trying to redefine campaign finance reform. I think I would definitely enact a bunch of legislation around trying to get money out of politics because it’s really screwed up. It’s the biggest problem facing America now, in many ways. Our government is basically being crippled by a few very rich people who can do whatever they want. So I’d try to fix that.

Where in the States would you ride out the apocalypse?

When was your last run-in with the cops? What happened?

Aaron Koblin: Jury duty! Police were dealing with me quite frequently. I’m not sure how much I’m meant to talk about that!

Which fictional American do you most identify with?

If you lost it all tomorrow, what would you do the day after?

Aaron Koblin: I don’t think I would change too much. I think I’d continue to make some random art. I kind of feel like I’m always starting again anyway. I’d probably feel more liberated!

Aaron Koblin: Really! Must be an American thing.

Aaron Koblin: God I hope its still around. I have a feeling its going to look a lot more Chinese. I could see it going one of two ways. Either we even some stuff out, or there’s going to be a very large number of wealthy people and a very large number of not so wealthy, very unhappy people. I hope that it looks somewhat similar, frankly, in terms of the natural environment. I’m optimistic that there are certain technologies that will fall away, and other technologies that will look a lot better.

Aaron Koblin: Definitely. Whether that’s a good thing or not remains to be seen.

Digital Revolution is on at the Barbican Centre 3 July-14 September.