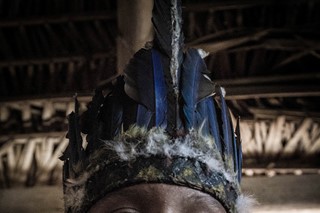 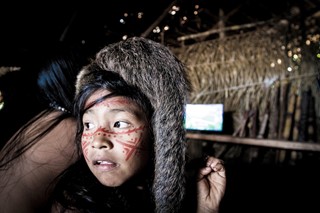 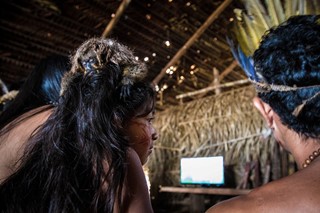 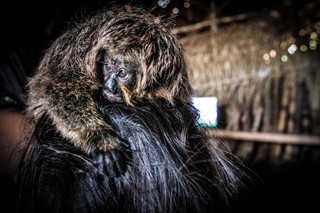 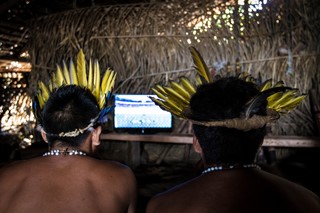 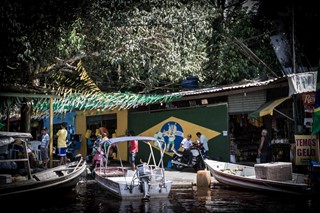 In case you hadn't noticed from the explosion of replica shirts, late-night pubs and television channels dominated by constant football – it's the World Cup right now. And that means people across the globe are tuning in, even in the jungle. Our photographers are all over the world on football's frontline for our Fever Pitch project, documenting the obsession and the passion that surrounds this tournament.

Dazed photographer Pedro Bayeux embarked on a journey an hour out of Manaus to spend some time with the Tatuyos, a tribe who live deep in the Amazon rainforest:

"We left Manaus on game day on a fisherman's boat that took us down the Amazon. It was a beautifully sunny day and all along the river the houseboats were decorated with Brazilian flags, with incredible nature all around me. The Tatuyos are a tribe that live on the left bank of the Rio Negro, otherwise known as the Black River. It took about an hour to get to their settlement from the port in Manaus.

On arriving, the chief Pinó Kaçique became my host – him and his tribe performed a series of dances to make me feel welcome. The tribe are traditionally patriarchal – the men hunt snakes and crocodiles to eat and the women cook the catches inside their houses made by trees that they've felled themselves. What's strange about the tribe is that they are a mixture of a lot of different ethnicities – while most tribes only marry someone from their own tribe, the Tatuyos are encouraged to marry from outside.

Ten minutes before the game, they started a generator to power a single television in their village and passed round snacks while they watched – huge fried ants! All of them were so anxious to see the game and you could see the tension in their eyes as kick off time approached. One member of the tribe said to me during the match: 'I am very moved by the World Cup, it's very near here in Manaus, Amazonas. We're used to seeing it in other countries, but now there is a lot of emotion that we can feel.'

Throughout the game they played instruments if they became nervous at what was happening on the screen. Afterwards they went outside to play their own match – men and women all played together, with a child as referee! It was beautiful."

Check here daily to see unpredictable images of people that make the game so beautiful.