Toilet-humour, controversy and anarchy for kids, we take a look back at Frank Sidebottom's strip in cult comic Oink! 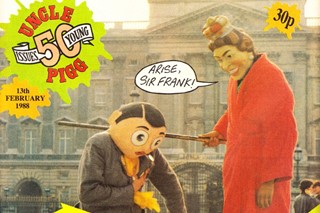 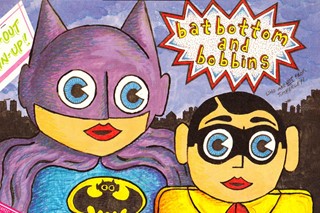 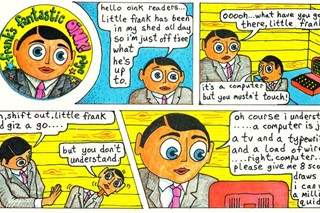 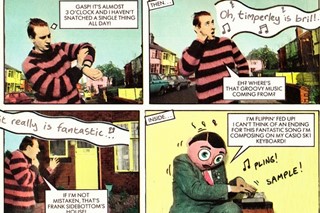 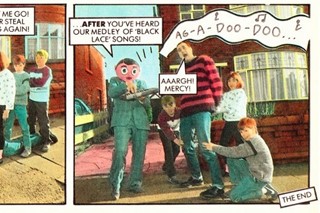 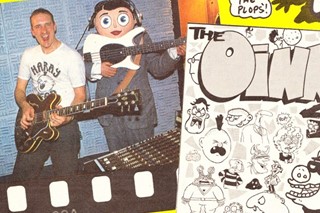 When Frank Sidebottom wasn’t on screen for his Fantastic Shed Show, heard on Timperly radio, front-manning The Freshies, or spotted as a sporadic correspondent for Grenada Reports, his unpredictable adventures could be found documented weekly on the pages of children’s comic Oink!. Setting out to be deliberately anarchic and encompassing toilet-humour, politically subversive messages and recognisable parody characters, Oink! was positioned a far stretch from its predecessors The Beano and The Dandy.

Whilst the comic strip captured the surreal and eccentric life of Frank, Patrick Gallagher, Oink! editor, band mate and best friend to Chris Sievey (aka Sidebottom), explains that the escapades of the papier-mâché-headed character were in fact not dissimilar to Sievey’s own. “If we were playing a gig, we would always get to the venue but the journey might take an hour longer than normal because Chris would take a new route,” explains Gallagher. Why? "Because he could – for Chris, life was just one mini adventure after another.”

From the moment Oink! gave birth to characters which included Uncle Pigg, Plops, Weedy Willy and Psycho Gran, to the final hand-curated pages of Issue 68 and the moment between where Oink! was top-shelved, we recount the journey of Oink! with the help of editor Patrick Gallagher.

Oink! hit UK shelves in ‘86 equipped with an Oink! flexidisk playing one track entitled, “Poo poo tinkle tinkle parp parp oink and tiddly widdly widdly widdly plop” by The Oinkletts and Uncle Pigg. “Tony Husband, Mark Rodgers and I had all worked on traditional comics, so we saw a gap in the market for something funny,” says Gallagher. “The traditional comics on offer dated back to the ‘50s and the ‘40s, illustrating kids running around in short trousers in their teens. We took the piss out of that.”

Eight weeks after devising Oink! with his co-editors, Gallagher decided he wanted to get Frank involved. “Having spotted Frank in another local Manchester magazine and having seen him play with The Freshies, I knew he would be a great fit for Oink!,” says Gallagher. “We wanted to separate ourselves from traditional comics; we were anarchic like a younger version of Viz, we had more bite, energy and attack than any other comics and we really relished that.”

From the Oink! Goes Peculiar issue – where strips were printed upside down and back to front – to the Christmas specials and holiday extravaganzas, each issue of the comic had a theme that often gave way to new ideas. But when it came to the Frank strip, innovation and experimentation were key. “Chris was laborious with his art work. He could have made it easy for himself by colouring in flat colours, but instead he used this stipple effect done with a felt tip pen,” remembers Gallagher. “He would take three hours to paint a page which would usually take 15 minutes, but he liked detail and he would always go the extra mile.”

“Having Chris on board was great because it meant that as well as his unique art work, we also had a real life character [Frank] to front the comic. We had someone out there publicising Oink! who was gaining more recognition,” says Gallagher. However, this public awareness sometimes had adverse effects... “I had been doing some work for the regional health authority and they saw our health issue of Oink! that covered smoking,” explains Gallagher. “It was done cleverly because we weren’t preaching, so they commissioned us to do a one off [comic] for them called Smoke Busters. They arranged for us to take a load of kids down to London on the train, but the funny thing was that there was a television crew filming us and Chris and I smoked, so we were pictured puffing away in the carriage whilst promoting Smoke Busters!”

Making the most of their trip to London, Sievey and Gallagher sought their trip to the capital as the perfect opportunity for an Oink! cover shoot. “We needed a shot for our honours and awards issue, so we thought Frank being knighted outside Buckingham Palace would be perfect for this,” laughs Gallagher. “I had this Queen mask with me and I’m looking for someone to put it on so Frank could get down on his knee for the photo. Only one kid would do it so we had him with the Queen's face on and Frank being knighted… he paid twenty quid for it but obviously it was worth nothing. Frank got ripped off. Sometimes adventures with Chris became nightmares.”

Causing controversy with their content, WH Smith were one of the various newsagents to ‘ban’ Oink! because they didn’t think it was suitable for a child audience. But efforts were made in vein. “The funny thing was that their ‘ban’ involved moving it up to the top shelf with all the girly mags, so then they had kids going up there to try and pull it down!” chuckles Gallagher.

During Oink!’s heyday it was part of a group, but when the other comics weren’t doing too well the trio laid Oink! to rest making the transition to television. “It was not just the end of Oink!, but the end of a group of comics,” says Gallagher. “Looking back, although it was thirty tears ago, the humour hasn’t changed and the content is still relevant. That’s why the Oink! blog is so popular today.”

Ten years on from the first iconic strip in Oink! and Gallagher and Sievey were still best mates who ended up shared digs for six months during the break up of their marriages. “Chris and I were on the same level we could both play music, write comedy and draw. My wife moved out and Chris’ wife kicked him out, so naturally we moved in together,” laughs Gallagher. “During that time it was like boys behaving badly, or men I should say!”

“The first thing we realized when he moved in was our mutual obsession with The Bonzo Dog Band, our other love was the Laibach Beatles' cover Across the Universe which Chris introduced me to,” remembers Gallagher. “He knew I loved it so much that when he moved out (after I helped reconcile his marriage with Paula), he gave me the CD as a present.”