9May 2014
TextTrey Taylor
How to get your head around Frank13 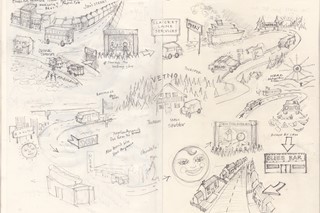 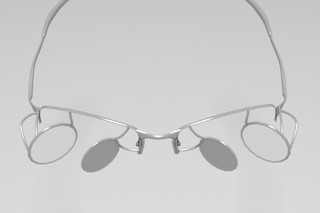 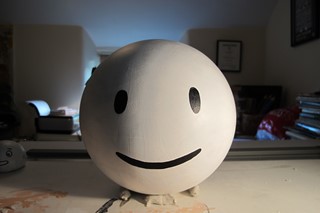 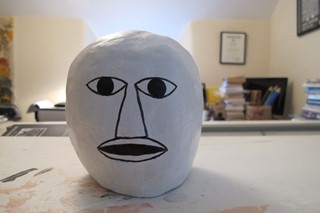 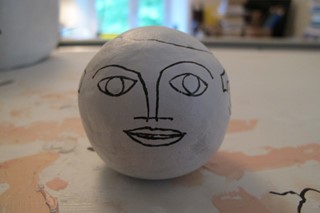 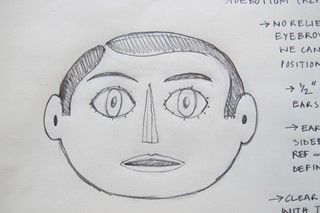 Frank Sidebottom was a real guy with a fake head. So when production designer Richard Bullock was tasked with constructing the polished dome that Michael Fassbender sports throughout the musical road-trippin' film, he looked back through art history for a spate of mask-like references: Bauhaus design, directors Michel Gondry, Tim Burton, Benicio del Toro, Terry Gilliam, Tahitian carnival masks and outsider art. Only after being made aware that Frank Sidebottom was a real life character with a comical noggin did Bullock start to hone in on his aesthetic. "I specifically didn't look at the Sidebottom head as I didn't want to feel bound to it," Bullock says. After a marathon design process, many, many versions of the head and a couple of hiccups in production, they settled on a Hey Arnold! tributary American football-shaped head, which turned out to be hardly dissimilar from the original Sidebottom creation. Its story of creation perhaps embodied the lifeless crown with the qualities Michael Fassbender needed for it to really stand out as a character on its own. Here, Bullock explains how he brought a bit of paper and glue (and some plastic embed-5vac-forms) to life as a laconic, larger-than-life character.

REALISE IT'S BASED ON A REAL GUY

"I'm not sure quite what the connection was – whether it was through my agent or someone else – but I met Lenny Abrahamson (director) a couple of times and we knocked about a few ideas for the head and other elements of the design, but mainly the head. I knew of Frank Sidebottom, but I was not aware that the film was connected in any way to him when I first read the script, and in fact not until my first meeting with Lenny as far as I remember.

I think four prototypes were initially made and then around twelve 'hero' heads, including heads to break, heads for the crash etc. Of the twelve heroes, I'd say six were used extensively for various things (make up etc.), you tend to focus in on one favourite."

LOOK AT A LOT OF DIFFERENT MASKS

"Lenny and I started by looking at masks and artistic representations of human heads from as many different sources as we could find. We studied everything from Haitian carnival masks to Transylvanian folk costumes and Cubist painting. Ultimately, we did kind of come full circle and back to something pretty close to the original – you often find this with the design process.

“The first time Michael Fassbender tried on the head, he said, ‘It's great, I love it!’ and didn't request any changes, to my surprise”

When we had settled on around three basic styles, I made small-scale models in my studio, and then larger versions as we refined the design. We then had three prototypes made at full size. A model maker called Robert Allsopp worked up the designs in clay, and then vac-formed vinyl over these clay sculpts. One key advantage of this method was that we could easily produce identical repeats. These plastic embed-5vac-forms were layered with paper to look like papier mache, then painted with acrylic paint and aged. We tested the prototypes for action and in front of the camera where we made alterations accordingly, until we made another final test head. We tried this with Michael and then went into production."

WORK YOUR WAY AROUND COMPLICATIONS

"One of the main issues was the field of vision experienced by the wearer. We initially used gauze eyes so the wearer can see out easily, which looks fine on stage or to the naked eye, but did not work so well on film. So we had to cut the eyes out of the solid plastic which severely restricts the vision. The first time Michael Fassbender tried on the head, he said, 'It's great, I love it!' and didn't request any changes, to my surprise.

The nature of my job means I don't spend a huge amount of time with the shooting crew, but I'm sure there were some hilarious moments on set. There was an occasion when we first started filming in New Mexico, it looked like the hero head had been left out in the desert. It was funny in retrospect only."

BRING LIFE TO THE (DEAD) HEAD

"Bringing expression to the head was something that was key to the design from the start. We tried a huge number of different designs with very small variations once we had settled on a basic format for the head. Millimetre differences in the shape of the mouth or the eye can make a huge difference to the overall expression. We wanted a design that could be shot from different angles and different in lighting to convey different emotions. Michael's performance was also a huge part of this of course. I enjoy the moment when Frank and Jon hug, and it's kind of awkward because of the shape of the head."

Frank is out in cinemas today