Our kid was a bigger Frank Sidebottom fan than myself. He bought the comic Oink!, which featured a Frank Sidebottom comic strip every week. Together we watched Frank Sidebottom’s Fantastic Shed Show and listened to the Frank Sidebottom show Timperley Radio on ‘261’ Piccadilly radio. Sidebottom even popped up as a reporter on Granada Reports. This was the mighty mega Greater Manchester where I grew up – in the 1980s it seemed that fame was everywhere. Factory records supremo Tony Wilson read the local news, the rock singer Paul Young of Manchester band Sad Café lived in the big houses over our wall and I remember seeing, on a few occasions, a young skinhead Ian Brown with John Squire at the end of the road messing around with a chopper scooter.

Your guide to a safe acid trip
Finding Frank30 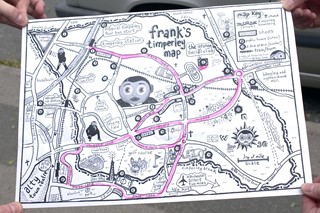 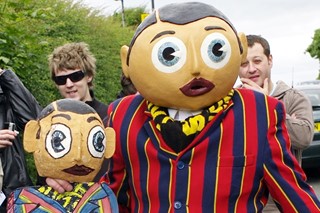 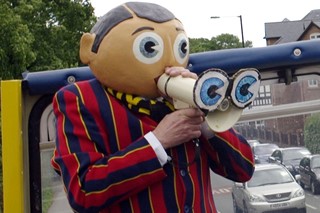 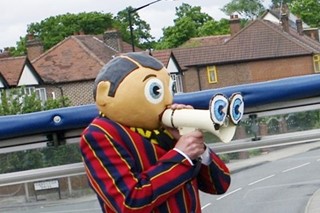 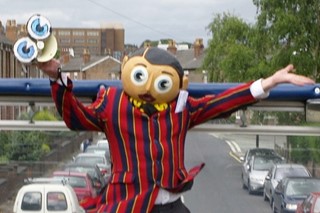 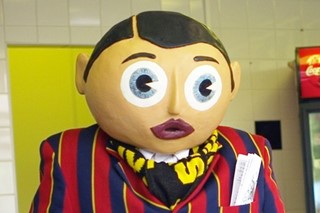 30 years later and I’m driving up the M6 motorway to see Frank Sidebottom like it's some personal homage to memories of my youth. I was time-travelling back to Planet Timperley because I wanted to document this bizarre cult hero with his large spherical papier-mâché head and high pitch ‘Mancunian’ nasal voice. I had heard somewhere that Frank Sidebottom was in financial difficulty and that was probably why he was back on the road doing his Magical Timperley Tour. Frank Sidebottom was always the total nonconformist, an unmistakable and irrepressible creation who found a following in the 1980s and '90s on late-night student telly and Saturday morning children’s shows.

Frank Sidebottom was a strange mixture of eccentric comedy and surreal performance – a cartoon character that had come to life, destined to remain a cult concern and icon of a bygone era. What was exciting about Frank Sidebottom was that you never quite knew what he would do next. He was the king of impromptu and maybe that’s what made people nervous – there was no rehearsals for this strange torpedo of man who celebrated the sleepy little Greater Manchester town of Timperley. I found the information about Frank Sidebottom’s Magical Timperley Tour through his personal website franksworld.co.uk, the meeting place where Frank would meet his fans and take them on a guided tour through Timperley and Altrincham on a double decker bus. Here, you would get the chance to meet Frank Sidebottom in person and hear his personal take on the surreal mundanity of life.

Throughout his career, Frank came across as cheerfully optimistic, enthusiastic and seemingly oblivious to his own failings, and because nothing ever really ever happened in a place like Timperley, Frank exuded a sense of great ambition which belies a domestic lifestyle in the north of England. Frank Sidebottom would never leave Timperley – they were inseparable. Some people thought he was weird and strange, some thought him sinister. But who was really behind the mask? No one ever knew. Maybe I’d get a chance to see him un-masked on this very trip and catch Frank unawares.

The rendezvous was on Moss Lane and already a crowd was gathering of mainly young kids and dads. Within minutes I could see the familiar 1950s-style sharp suit and his famous massive round head walk towards us. Frank Sidebottom welcomed everyone and immediately posed for photos, before climbing on board the red double decker bus with all the passengers, taking the slip road by the side of the Manchester Ship Canal, while Frank Sidebottom spoke into his loud speaker about the ‘fantastic’ key focal points of great importance.

The bus journey went from Timperley station through Timperley village (where we stopped for chips & gravy), past his beloved Altrincham FC and then Timperley Grange Sports & Social Club, where Frank would perform with his legendary Oh Blimey Big Band such classics as "Timperley Sunset" and "Anarchy in Timperley". You could even buy limited edition Frank Sidebottom merchandise for a reasonable price. I hoped to catch Frank unawares, but there was little chance of that. Whoever it was underneath the Frank Sidebottom head, I would never get to see. He remained in character the whole time.

After two whole Magical Timperley Tour’s, I decided to call it a day and drive back to London. It was only after the death of Frank Sidebottom’s ‘creator’ Chris Sievey in 2010 that I finally realised that Frank lived only doors away from where I grew up. I must have passed Chris Sievey’s home a million times when I was a kid and maybe Frank was sprinkling his fantastic magic in the air all around, rubbing off on anyone who cared to listen or watch. I too went on my own brilliant journey and, whether I admitted it at the time, Frank was certainly a major influence who left a massive legacy. Now I know who was inside Frank Sidebottom’s head, he is no longer here, and is now immortalized into a life-size bronze statue in Timperley. As Frank would always say at the end of every song, “You know it is, it really is, thank you.”

Frank is in cinemas today