Twenty years after Larry Clark reinvented street cinema with Kids, he’s doing it all over again with a crew of young Parisians.  They tell us about the perils of working with genius

Lukas Ionesco, Théo Cholbi, Angie Sherbourne and Serena Thelma Perret are all 19 to 21 years old. They’re not famous yet, but they’re young and strangely beautiful in a rough, powerful way. It’s the reason director Larry Clark, who’s always been attracted to youth subcultures, cast them as characters in his forthcoming feature about self-destructive Parisian skate kids, The Smell of Us (his first ever foreign-language film). “The boys just texted me they’d come. I hope the girls will too,” says photographer David Ledoux. “They’re great kids, but with them, you never know...” It was Perret, an arty little blond elf, who first introduced Ledoux to Ionesco (her ex-boyfriend), Sherbourne (a model and one of her best friends since they met on set) and Cholbi, Ionesco’s faithful party partner. “Their look is a true expression of their personality,” Ledoux says. “In a city as judgmental as Paris, I admire that ability of being singular.” 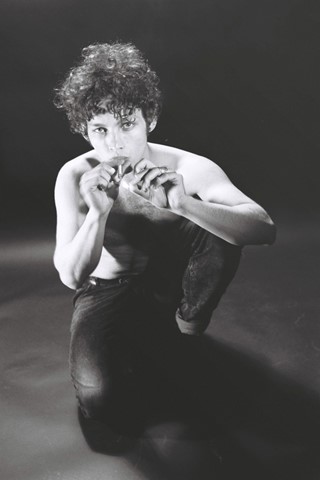 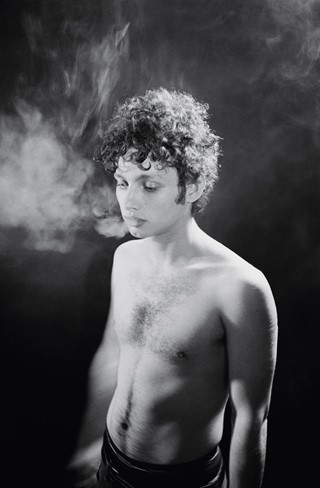 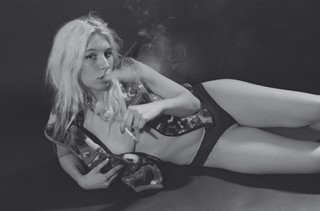 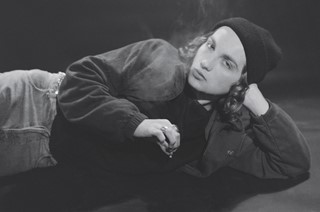 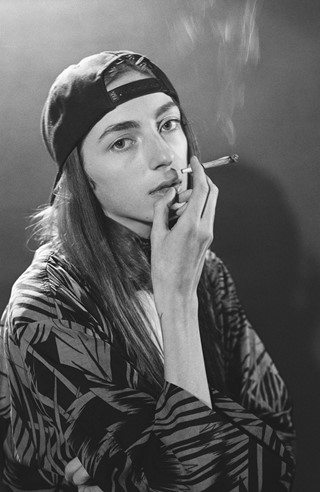 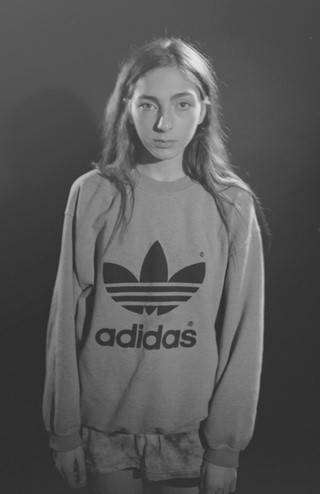 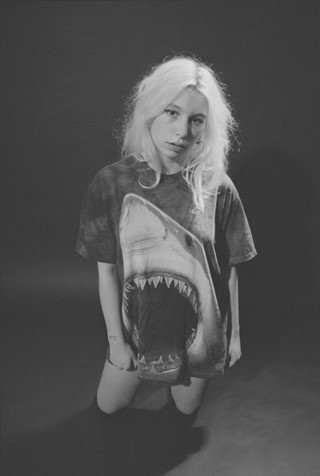 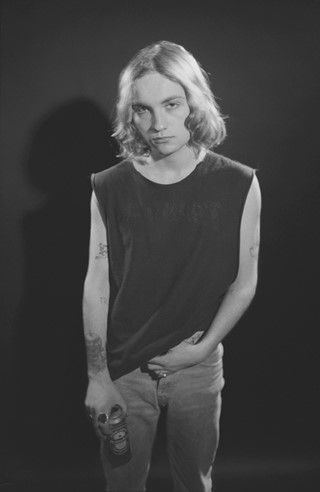 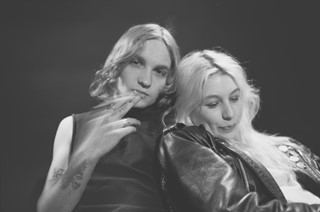 Ionesco is the first to show up, perfectly on time despite having been out till eight in the morning. Cholbi enters soon after. The pair are still recovering from last night’s Césars (the French Oscars) afterparty. “It was cool but I don’t remember that much,” shrugs Ionesco. “There were plenty of directors there, but who cares?” His cherubic face looks familiar, and I suddenly realise that I met his mother, director Eva Ionesco, three years ago in Cannes. She was presenting her first feature, My Little Princess (starring Isabelle Huppert), a dark, striking tale inspired by her complex relationship with her mother, as part of Critics’ Week. During the first hour at Ledoux’s studio, Ionesco’s voice is heard only sporadically, with his succinct and witty commentary on Cholbi’s debriefing of their nocturnal adventures. “I tried to introduce Lukas to a friend of mine, Adèle (Exarchopoulos, the Palme d’Or-winning star of Blue is the Warmest Colour),” says Cholbi, “but he was already too far away from our world. He didn’t give a shit.”

Cholbi isn’t close to matching Exarchopoulos’s success just yet, but his dark eyes and curls have made an impression on several directors. “I just did a shoot in Spain with a leopard,” he grins as the girls ring the bell before strolling in. Sherbourne and Perret make for a contrasting pair – the former a lengthy, skinny beauty, casual and fatale in a long coat over a super minimalist outfit, and the latter an explosive angel-faced doll in a multicoloured parka and silver school satchel. A mini-reunion ensues as the group, who obviously feel at home here, head to the kitchen to rummage around for supplies. “It’s Saturday, Dave, so we can smoke, right?” asks Ionesco. “I only brought two beers. Didn’t know we’d all be here.” “After last night, I just want tea,” retorts Perret, while Sherbourne hands out Smarties to the troops. They shout out jokes and stories, catching up on who’s dating whom and eating anything edible they can find in the kitchen. “Serena, are you still with your huge African-Japanese boyfriend?” asks Cholbi. Yes she is, which doesn’t seem to bother Ionesco, whom she dated for “two and a half years, a long time ago.” The two remain good friends, as evidenced by the fact that she lent him the Back to the Future sweatshirt he’s currently wearing inside out. “Shame on you,” she whispers to him when she realises.

Talk eventually turns to the reason we’re here: “Larry”. The big questions being: when are they going to see the film they acted in for him last summer, and who’s going to take part in the promotional tour later this year? It’s no secret that the shoot ended in drama. Director Thomas Kimmerlin caught part of this tension in his behind-the-scenes mini-series A Summer With the French Kids of Larry Clark. In the middle of the process, Clark suddenly changed the script and got rid of some of the characters, traumatising the close-knit cast. Today, the four present put Clark’s volatile behaviour down to “the genius thing”. They all knew and liked the director’s work long before they met him – their favourite Clark features are Kids (1995) and Ken Park (2002) – and they were aware of the reputation concerning his methods: that the end justifies the means.

“When I met Larry, I’d only written a few short films. Larry gave me total freedom, to the extent that he won’t co-sign as scriptwriter, which is very rare with him. This confidence could have been oppressive, but it gave me wings” – S.C.R.I.B.E.

On the way to a bar, we chat about Clark’s movie – he’s hinted that it might be his final film – which follows a group of hard-partying skateboarders in Paris who hang out at the Dôme, just behind the Musée d’Art Moderne. Clark discovered this scene while working late on his 18+ only exhibition Kiss the Past Hello at the museum in 2010, and recognised echoes of Washington Square Park circa the early 90s and the kids who became Kids. He also met S.C.R.I.B.E., a young and gifted poet from Nantes. Clark invited the writer to compose a screenplay based around the shifting group, whose ages span from 14 to the early 20s. Reminder: Harmony Korine was only 21 when he met Larry Clark and wrote Kids for him.

Clark gave S.C.R.I.B.E. the task of portraying the Parisian skate world – a very particular microcosm – instructing him to stay with them, listen to them and do what they do. “I lost myself,” S.C.R.I.B.E. tells me later. “I wandered in Parisian skate parks, in squats, concerts, on the docks of the Seine. I met all sorts of broken people and luminous creatures that fed my first draft. It was dark, it was a wonderful time. I ate at their table, I slept with them and we became very close. Digging an expression, a gesture, I could anchor the scenario in reality, their reality. When I met Larry, I’d only written a few short films. Larry gave me total freedom, to the extent that he won’t co-sign as scriptwriter, which is very rare with him. This confidence could have been oppressive, but it gave me wings.”

“I’m so bad with saving money. Last time I spent it all on parties, weed and clothes” – Angie Sherbourne

The shoot didn’t feel like work, the actors say – they simply hung out and partied as the cameras rolled. Ionesco, the one who looks like a young Michael Pitt, describes his character, Matt, as “kind of lonely but with a small bunch of people around. He doesn’t get along really well with his parents, he’s a drug addict and he’s broke. Him and his best friend become escort boys, working for rich people. So now they have the money, the clothes and the skateboards they want, but they feel trapped in this world and don’t know how to get out of it.” Théo is Pacman, a “hyperactive teenager who lives by himself and spends his time skating, doing drugs and fucking girls. He freaks out when his girlfriend, Marie, leaves him.” Sherbourne and Perret have smaller roles as “just girls”, they shrug. “I did ten days of shooting and a sex scene,” Sherbourne says. But it was far from the work of porn-star-turned-actress Sasha Grey, whom Sherbourne admires. “She’s the best. She can swallow your forearm without shedding a tear. Anyway, let’s face it, my character basically spends her time partying, smoking weed and being naked.”

“I need to raise myself spiritually. Drugs can help sometimes. But also literature, which I’ve decided to explore more” – Angie Sherbourne

The girls have to catch a train soon, so we sit down on the plaza at the very old-fashioned Café République. An old bourgeoise with a voluminous blow-dry presses against her husband, hiding her luxury handbag. She looks slightly disappointed when these scary teens order long coffees and hot chocolates. Conversation turns to what they dream about. Do they see their career in the film industry? Maybe, maybe not. In 30 minutes, Perret has a meeting to prepare for the fine art exams her mother is pressuring her to pass. “I don’t feel like it,” she complains. “They ask me to do too much work.” She takes an old laptop out of her silver satchel and shows me some of her drawings and photo series. One is about the pale frontier between the beauty and the monstrous; the other one, titled “Relics”, shows souvenirs from her childhood bedroom. It’s smart and touching.

In three hours, Sherbourne will be in Lille for a shoot. Her outlandish style and captivating looks have charmed two modelling agencies, Metropolitan in Paris and R Agency in New York. “It’s a nice job. You can make €900 with just one show, but I’m so bad with saving money, last time I spent it all on parties, weed and clothes for Serena and me. I really hope they’ll keep me for the Céline and McQueen shows.” Her 80s backpack contains reading material for the weekend: a science-fiction novel by Bernard Werber and The Tibetan Book of Living and Dying. “I need to raise myself spiritually,” she says. “Drugs can help sometimes. But also literature, which I’ve decided to explore more.”

Tonight, Cholbi will attend a more or less improvised party in the new bastion for penniless artists: Montreuil, east Paris. He’s a drummer and has a gig with his post-punk band, Lust for Psychoses. Tomorrow, Ionesco will go to the printing house to see the first editions of his debut book of black-and-white photography. His work is impulsive and promising,  and Ledoux has offered to employ him as an occasional assistant. He’s also shot a short film with S.C.R.I.B.E. And that’s all they can say about their future until The Smell of Us gets its release.

“All true skaters will tell you most films dealing with the subject fall into mediocrity,” S.C.R.I.B.E. says, “but Wassup Rockers by Larry Clark is a realistic rendition of the skate state of mind: improvisations, diversion and seeing the city as a playground.” If anyone can capture contemporary Parisian youth, it’s Clark.  “Larry loves broken jaws and youth that burns its wings,” the writer continues. “He gives himself entirely, with his demons, with a gaze he offers but also feverishly controls. I’m touched by his nostalgia for a teenage Eden which doesn’t really exist, and his willingness to break reality with a great punk scream.”