The ever brilliant Ed Atkins has teamed up with former Slade graduate Patrick Ward for a collaborative 20 minute film ‘Defining Holes’ being shown at the Whitechapel Gallery. The piece is a very interesting sounding exploration of nothingness around moving images, using everything from HD cinema to “youtube esoterica” to sound design.  Expect a lot of visual, aural holes that should be filled by a very interesting discussion between the artists afterwards.  Book fast, tickets are running out quick.

PV of the Week: Phospene

Phospene describes the phenomenon of seeing light without it entering the eye. This strange part of visual experience is the title of great looking group show opening in Oxford all about surface. Gabor Gyory the co curator of the brilliant artists-run space Twelve Around One off Bethnal Green Road, has put together this exhibition with some great emerging artists often working with abstraction including Majed Aslam, Joel Beach and Jack Brindley.

Exhibition of the Week: Garage Grit

It’s hard not to love every show that MU in Eindhoven puts out. The latest from this cutting edge institution is a show “on art, travel, traffic and the future” curated by Thomas Marecki the artist/designer behind Lodown magazine. This Ballardian concept looks at the intersection between technology, travel and our modern experience with a big emphasis on transport, traffic and cars. Artists include Marecki himself, Tom Sachs, music producer Patrick Pulsinger and British car nuts Death Spray Custom.

Are you bored of your desktop? The image on your iphone feeling culturally defunct? Desktop Residency is a brilliant changing programme of downloadable art projects where artists create desktop, ipad and iphone images for people to download and ‘live’ with. Ryan Gander, Brenna Murphy and Nicolas Guy have all contributed in the past.

Download the current project from Paul Kneale until September 4th. 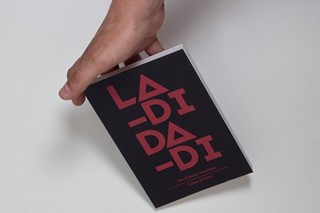 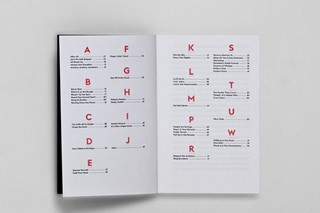 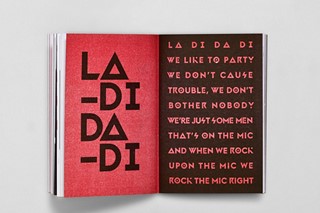 Beautifully designed by Matthias Hübner, this artist’s book is a very personal eclectic manifesto based around song lyrics. Feireiss has created an A to Z which takes phrases from songs and titles such as ‘Aint No Half Steppin’, ‘Pull Up To The Bumper’ and ‘Shimmy Shimmy Ya’. The result is a part fake part real mini encylcopedia of meanings. This baby book is a personal collage of musical inspiration, great graphic design and an ode to the hip hop, rock and roll and audio genius of the 20th century.