Ahead of London's premier art festival, the legendary journalist and author talks to the duo about their latest expo, 'Nihilistic Optimistic' 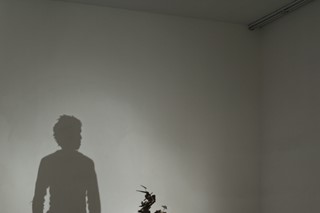 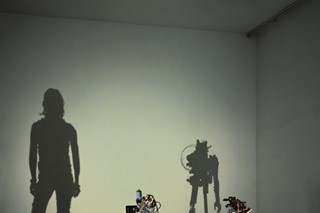 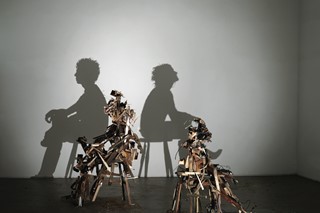 Tim Noble and Sue Webster have been working together for seventeen years. Back in 2012, they started working towards 'Nihilistic Optimistic', a major exhibition in Blain|Southern’s new purpose-built gallery in Hanover Square. It will include a number of paired shadow pieces, as well as a not-shadow piece (My Beautiful Mistake, which forswears the shadow in favour of a 15ft high psychological portrait constructed out of discarded objects). Sue reveals: “With My Beautiful Mistake we introduced the idea of not having the shadow. When we were working on the several sculptures that were going to have shadows, we just thought, they're quite fascinating in their own way, and we kept daring ourselves to not make the shadow'.

Sue notices me looking, “I had to sacrifice loads – I've always got piles of books by the side of my bed, because I love reading, and I just keep them there. I don't like giving people books. You never get them back, and I like to see what I've consumed. It's like looking at what's inside my brain.”

“If you really want to read something into it,” Tim ventures, “it's like, don't judge a book by its cover. When you meet someone, there's mountains of psychological crap to get through. No, not crap. Very interesting stuff.”

Noble and Webster are living and working in an area which is going through convulsive changes. Are they trying to record that or capture that sense of dislocation?

“We've lived in Shoreditch now for fifteen years,” states Sue, “since it was the place to be to get away from everyone else, and it's not stopped changing and evolving. Everything is speeding up. I'm noticing that more and more. Nobody's got any time, everybody's juggling twenty thousand things. Trying to get your best mate to meet you for dinner is just impossible. People are taking on too much. In this constant changing and rebuilding, your mind works differently.”

But then the Shadow sculptures reverse all that acceleration. It stops. They're built out of decay, but they're not entropic – rather, a deliberate process of slowing down time to a point of stillness amidst all the dazzling distraction and dislocation.

“We're so used to getting everything Now.” Sue adds, “We read it, we look at it, and go, no. We walk around an art exhibition in one minute. You can't walk past that [gesturing to My Beautiful Mistake], you have to give it time, to work it out and understand it. So, we're slowing down the acceleration. Interesting. I think the title is in there somewhere, isn't it?”

I ask about the title, and whether it’s to do with a war within themselves.

Sue explains, “I think I've still got the desire to hold on to something to make it special, to hold back, to deny – to say no. Nihilistic, Optimistic. Then there's a subtitle, ‘Street Compositions’. Because you're walking down the street and you see a bin liner with a banana skin on top of it, and you think, nice composition. We're going around photographing. There's a bin that's full, it's teetering with junk and it's a nice composition, so we came up with that term.”

I ask which one they see themselves as being, or whether they’re both.

Sue answers first, “I think you can be... because there are two of us – if one is up, the other is down. I don't think we're ever both on one side of the coin.”

Tim adds, “Sue likes to really have a go at things. I'm always trying to be more reasonable. So I think I'm optimistic, and she’s nihilistic.”

Sue half agrees, “I'm nihilistic, yeah. But I can be optimistic. I think it just goes up and down like a yo-yo. The mood can swing just like that.”

“It's not negative, because it's hugely energetic,” Tim explains, ‘but you've got a slant on it. I've got an internal optimism, I think. I can go off into the land inside my head, and that can be a mad, weird place. So I need pulling back.”

“You mean floating up there, like a balloon?” Sue asks, “I've always thought that, ever since I met you. You're up in the clouds somewhere. I need to keep hold of that string.”

I ask one final question – with such a slow accretion of detail within an overall shape, I wonder whether the pieces are planned or if they evolve organically? They both answer at once….

“My Beautiful Mistake was really just about enjoying the form it took as it unfolded,' says Tim, 'and then see what happens, which we also love.”

“You're making it up as you go along,” adds Sue, “literally, like abstract painting. You're in the dark, the two of you, and some of the best times I've had have been while making that.”

“It was very spontaneous, wasn't it? A screw driver and a jig saw…”

“We often don't work on one thing at the same time, together.” Sue muses, “We just can't bear someone else being in the room, but with those pieces we worked very much in union. It was such a fantastic experience. You'd be at the top and I'd be at the bottom, doing the detail. You'd be doing the big sweeping statements. I'd be making it tight, you'd be loosening it up. I'd be really into the frayed bit on the ripped jeans, or the shoelace, or something. I've got my pile of debris there, which I've been collecting; some of them are off-cuts of something else. I'd leave the room, and half of them would be missing…”

“The penguin stealing the rock from the other's nest.”

“You're talking about an ecstatic pleasure of the highest form,” Tim concludes, “You can wander around feeling quite insecure and insignificant, but when you're doing that, whaaa!”

Frieze starts on Wednesday, October 10, come back to Dazed Digital for interviews, previews, photo stories and expert commentary throughout the week. Dazed & Confused's art-themed November issue is out October 17, 1202