Taken from the October 2012 issue of Dazed:

The humorous tension between “corporate” and “creative” is why Bernadette Corporation is probably one the most influential art collectives working today. Its members’ output over the past 18 years – fashion projects, novels, films and objects – is almost incidental in comparison to their influence in presenting a conceptual alternative for making art.

The collective has had an evolving line-up since its creation in 1994. At its core are Bernadette Van-Huy, Antek Walczak and John Kelsey, though their individual identities are intentionally never discussed. Here biography really is irrelevant. Bernadette Corporation emerged at a time when New York City was still living with the wild legacy of the 70s and 80s. “I don’t know what NYC was like at that time,” Van-Huy recalls. “I was 23, and the city I lived in was a young person’s hallucination, 100 per cent generated by the narrative I imagined myself living. I was a late bloomer, only then initiated into an historical attitude of bohemian decadence. And that’s what I saw all around me, a wild, decadent landscape.”

The group formed at Club USA, a nightclub that existed between 1992 and 1995 in an old theatre near the seedy neon of Times Square. These were the notorious days of Michael Alig’s Club Kids. “I had barely even been to a nightclub when I was by some freak circumstance approached by the manager of Club USA to throw parties in the VIP room, alongside Michael Alig, the king of nightlife back then,” Van-Huy explains. “I asked some people in my scene to do the parties with me. We had a meeting one day about what to call ourselves, and the others thought up ‘Bernadette Corporation’. We decided to call our party ‘Boring’, but in (owner) Peter Gatien’s office, with MichaeI Alig standing at his side, Peter said, ‘No way.’ Michael Alig said, with boredom, ‘They want to deconstruct the nightclub.’ And so we changed it to ‘Fun’.” 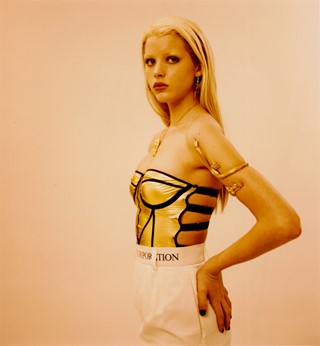 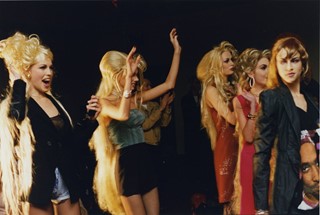 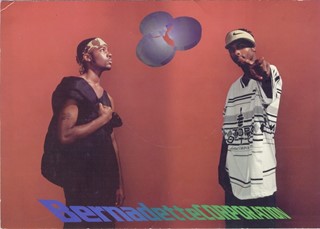 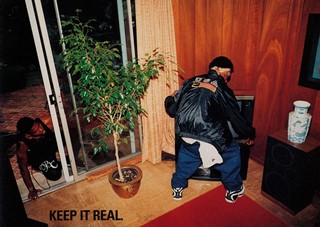 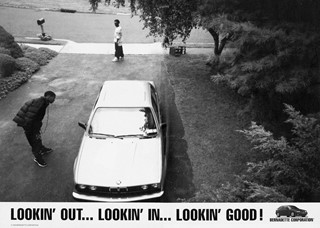 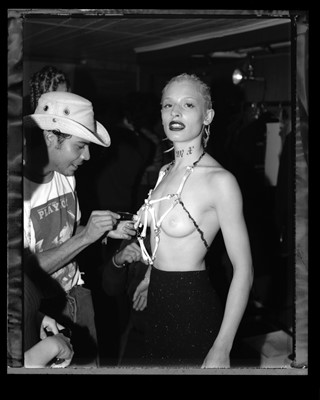 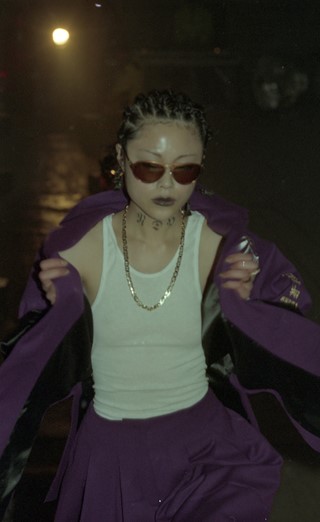 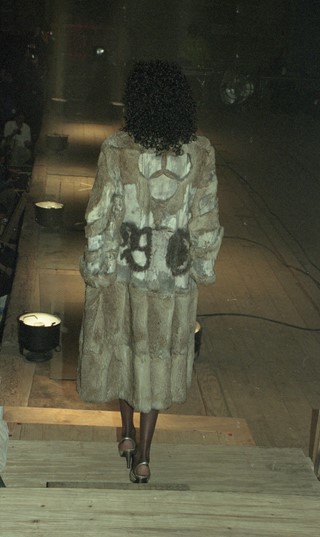 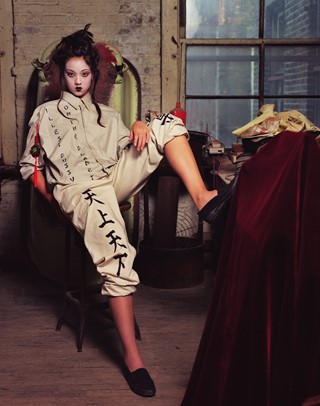 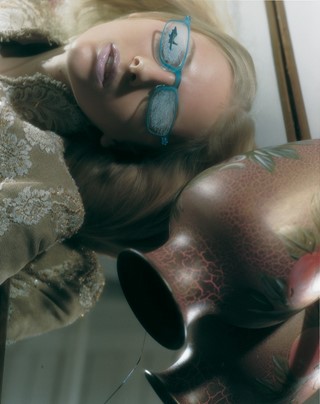 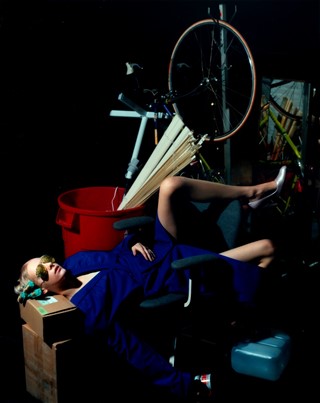 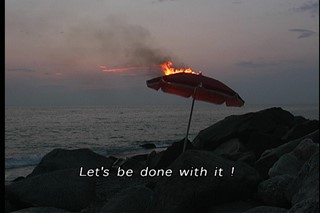 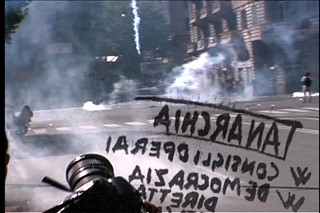 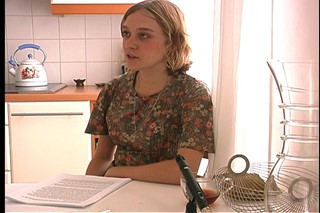 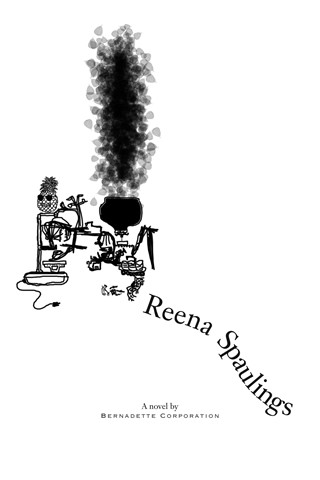 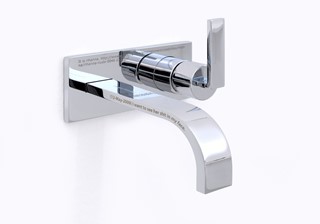 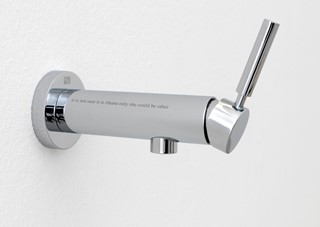 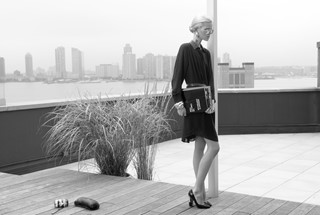 Bernadette Corporation began as a scene. John Kelsey got involved through mutual friend Colin de Land, the unique anti-commercial art-dealer. de Land’s American Fine Arts, Co gallery was a refuge and hangout in the 80s and 90s, presenting art from the likes of Art Club 2000, Alex Bag and Cady Noland. “I think that was a real 90s thing, the scene-based entities,” Kelsey recalls. “Nobody had money, everybody was young, so it made a lot of sense to band together and do things collectively. There was a real DIY ethic at that time.”

The creative crossover between art and fashion was in bloom: Dazed was being born, Wolfgang Tillmans’ work was appearing in i-D and Corinne Day was showcasing Kate Moss in The Face. “We spent hours at magazine stands daily poring over fashion magazines,” Van-Huy says. Architecture student Thuy Pham, who later moved on to start cult label United Bamboo, had the idea to do a fashion line. Without thought or planning the rest of Bernadette Corporation agreed.

From day one there was an element of humour to their highly conceptual approach. “Once you remove yourself from the serious, quasi religious, romantic idea of the solo artist or solo designer, it’s already funny,” Kelsey notes. “How can it not be funny to be a group of friends posing as a corporation, making work that competes with solo artists? It automatically creates a funny situation.”

“Once you remove yourself from the serious, quasi religious, romantic idea of the solo artist or solo designer, it’s already funny. How can it not be funny to be a group of friends posing as a corporation, making work that competes with solo artists? It automatically creates a funny situation” – John Kelsey

They barely had enough pieces for their first two collections, and added thrift shop clothes and items borrowed from Fila, Columbia and Nike to beef things up on the catwalk. They attacked the ideological framework, hierarchical bigotry and economic drive of the system. Bernadette Corporation the label had a thing for Chinese knockoffs, deliberately destabilizing expectations by inserting ideas of immigration or class. “One season we auditioned models from agencies we found in the Yellow Pages,” Van-Huy remembers.

“The modelling agencies, no matter how much press we got, would never give us better models. There was always one model who was furiously pissed off about the looks, but always looked great on the runway, filled with fury.”

They started doing shoots, such as one based on the US TV show Cops with, Van-Huy says, “our logo on people robbing homes and cars”. It highlighted how Wasp brands like Polo and Hilfiger were being given unwanted publicity by crack addicts and thieves. Their work was picked up by stylists in Harper’s Bazaar, Visionaire and Purple. In 1996 they released a motivational-style proto fashion-film, The BC Corporate Story, that played with corporate branding.

The label lasted until 1997. A couple of years later Bernadette Corporation re-emerged to publish a magazine, Made in USA (named after “the worst movie Jean-Luc Godard ever made”), releasing three issues between 1999 and 2001. Fashion imagery was placed alongside hardcore philosophical art texts. Kelsey: “There was always this idea of using the fashion image in other ways to destabilise it and use it as a surface to think about other things.” Ideas of surface were at the heart of another proto fashion film, Hell Frozen Over (2000), which included Semiotext(e) founder Sylvère Lotringer giving a lecture on the poet Mallarmé on a frozen lake.

In 2001 they started working on the film that would eventually become Get Rid of Yourself (2003). It was the height of the anti-capitalist movement. “I had met some people in Paris who were involved in militant stuff, in an anarchist way,” Kelsey says. “They were writing political texts and publishing them, and there were similarities between their strategies and ours – anonymity and collective production or collective work. It was a joke to do a merger between our company and the anarchists, but we were actually collaborating.” The anarchist group was called Tiqqun, members of which would contribute to 2007’s revolutionary text The Coming Insurrection. They planned to go to Genoa for the G8 protest to document the amorphous “Black Bloc” movement, which was really just the tactic of covering faces in the street to avoid identification. It had developed in the 80s but was gaining broader media attention under surveillance culture.

As Kelsey emphasises, the aim was never to create a documentary. “The genre of protest documentary really plays into the whole media spectacular, the policed nature of the anti-global. We were really aware of that.” Instead, Bernadette Corporation gathered footage randomly in the street during the protests, to get raw material to subvert in the editing. This was mixed with Chloë Sevigny reperforming sections of activists’ speech in a kitchen. “It was important for us to keep it in a discomforting place,” he says. “The activists rejected our fashion interests the whole time, but it was something we had in our hands that we could use as a tool to destabilise a kind of given image of the protest and of radical politics, of anarchy.”

In the middle of editing Get Rid of Yourself, 9/11 happened, changing everything. The fourth issue of Made in USA went out the window as fashion advertising budgets disappeared. The momentum of the anti-globalisation movement was completely squashed. As Kelsey recalls, “Suddenly everything was about anti-terrorism, and civil disobedience was put on the same level as terrorism, in the States at least. And there was this real feeling of depression.” The film has an apocalyptic atmosphere. It starts with the slow-motion smoking twin-towers, editing them into a Rorschach-like image to the sound of planes. The violence at Genoa was interspersed with Sevigny learning her lines, tales of riots, and a Paul McCarthyesque dose of humour from someone dressed as a comedic old man picking up dead fish in a canal.

“The genre of protest documentary really plays into the whole media spectacular…The activists rejected our fashion interests the whole time, but it was something we had in our hands that we could use as a tool to destabilise a kind of given image of the protest and of radical politics, of anarchy” – John Kelsey

The collaborative, political nature of the film led immediately on to the idea of making a collaborative novel. One hundred and fifty writers contributed to what became Reena Spaulings (2005). Loosely based around the central character, an identity-less, blank, bland model, it is also a story about the post-9/11 New York landscape. According to Kelsey, she “was a character but she was also a function device. There was this almost sadistic idea that she could be re-written, erased, deleted, changed by whoever felt the desire to do that in the writing. She was at the mercy of the people doing it. She’s a character, a name, but also a collective production.”

The idea “to squat the novel” was combined with a fascination with the Gossip Girl books and the factory-like efficiency of the Hollywood studio scriptwriting system. An editorial committee including Bernadette Corporation would go to a nameless gallery space Kelsey was running (which later took the name Reena Spaulings) a couple of times a week, roughly scheme each chapter and assign outside writers. There was a constant back and forth in the editing.

The book took two years to create and has gained an almost mythic status in the years since (it’s currently published by Semiotext(e) and MIT Press). The approach influenced a younger generation looking for new ways of creating work. Under the collective name Francis, writer Jeff Kinkle co-wrote the brilliant, similarly conceived book The Meeting of Failures, Act I, London in 2011. “We liked its references and backdrop and the overall idea of the project,” Kinkle says. “Our own book is a collage of stolen fragments – hip hop lyrics, anachronistic critical theory, lines mistranslated from hipster blogs – for which Reena Spaulings provided a pretty good template. We didn’t steal from it directly, but we liked the idea that it would have been fine if we had. That playfulness and sense of irony somehow seems to invite appropriation.”

Appropriation was at the heart of a recent Bernadette Corporation show at Galerie Neu in Berlin that featured bathroom fittings engraved with web comments on Rihanna and reviews from Amazon. The relationship between the internet, economics, consumption and ideas still touches on their awareness of fashion. As Bernadette points out, “Like most things, style has been disconnected from its meaningful parts, from a way of life. Cut off to be made into pure signs, interchangeable, exchangeable, consumable by anyone. Circulating freely, recycling continuously.” Kelsey adds: “People look like they have several windows of information open on their bodies at once.”

Their true legacy is as a model of a functional, critical collective for other groups like Bruce High Quality Foundation and LuckyPDF. “They were talking about incorporation and about the power and freedom it gives you to do it as a joke and be deadly serious,” LuckyPDF’s John Hill notes. “Bernadette Corporation shows the power to disrupt by fully embracing. There’s no need to use art to model doing something when the world is a place to actually do it.”

“If you look at contemporary art collectives like, say, Claire Fontaine, there are direct parallels of how to address our oxymoronic existence at the morning of our 21st century,” enthuses Stefan Kalmár, curator at Artists Space. “Bernadette Corporation is influential in how we think about ourselves in relation to those contradictions — and how we still can assert some form of meaning and difference, or as Reena says: ‘Only the impossible is worth the effort.’ I simply believe no one better than Bernadette Corporation reflects with integrity the changes that took place within the cultural and economic sphere over the past 20 years.”