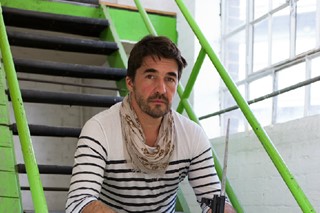 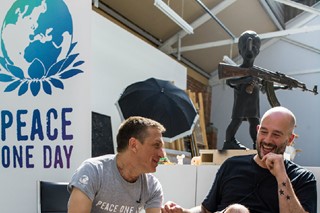 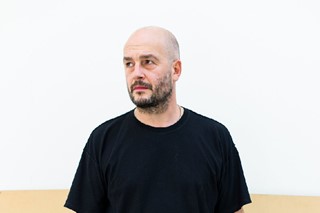 It started out as a film project thirteen years ago and soon evolved into a day of peace recognised the world over. Today, 'Peace One Day' extends its reach to the creative realm, joining forces with the previously unparalleled force of Jake Chapman to raise awareness about the day and to curate an exhibition this September. For the project, titled 'AKA Peace', Chapman has furnished the biggest names in art – including Gavin Turk, Gary Hume, Sarah Lucas, Damien Hirst and Stuart Semple – with AK47s, or as he would have it, blank canvases. It’s a momentous collaboration and one that sees knowledge, enthusiasm and vigour being dished out in equal measure from both sides. Dazed Digital caught up with Chapman and 'Peace One Day'’s founder Jeremy Gilley this morning.

You could say that an abstract piece of art is coherent and political, it doesn’t have to look political in order to be political, the gesture can be more subtle. It certainly wouldn’t be protest art like Banksy. I don’t think that’s worth doing

Dazed Digital: How did you set about choosing the artists for AKA Peace?
Jake Chapman: It's not a definitive list and we could have carried on. There are a couple of people who refused and I don’t really understand why but most people just jumped at the chance, so we didn’t have to sift or edit. We just picked the top people and they all said yes.

DD: This is about raising awareness, so how do you aim to reach people who might not understand the world of art?
Jake Chapman: Artists are only doing what they can do in the realms of their own specialty – that’s the thing to remember. We’re not trying to recruit people or change their perception of art.

DD: How else, apart from through art, are you hoping to raise awareness?
Jeremy Gilley: Through music, sport and education. We’ve got education materials in 197 countries right now in the six official languages of the United Nations. So, whether its through art, poetry, literature, music, photography or film, there are lesson plans that give young people the tools to say: ‘right, now I’m gonna express myself, I’m gonna make a difference, I’m gonna change the world’. We also teamed up with LOCOG and are doing the opening and closing shows of the cultural Olympics, and have a massive football campaign called ‘One day, one goal’.

DD: You’ve got it covered!
Jeremy Gilley: Global domination! But that’s what you have to do, you look at the world and find the leading people in each sector. In the future, Jake’s kids will go home and say, 'It's Peace Day today, dad’ and he’ll go, ‘Yeah, I helped start that'.

DD: And are you interested in the education side of things Jake? Can we be teaching people to use art in a positive way?
Jake Chapman: I have a pessimistic view about how much art has the ability to effect things – I just think this is a tangible way of at least doing something, I cant expand it to anything better and bigger than that, its just the idea of doing something is better than doing nothing and I think in a depoliticized time, that’s quite an enormous strive forward.

DD: So we’re not moving into a new, more conscience-driven phase of art?
Jake Chapman: I would be cautious about saying that a piece of art that is more politically obvious is more political than an abstract piece of art. You could say that an abstract piece of art is coherent and political, it doesn’t have to look political in order to be political, the gesture can be more subtle. It certainly wouldn’t be protest art like Banksy. I don’t think that’s worth doing. I don’t mind his work, but it should still be about the discourse rather than being politically pictorial. I didn’t want anything like that in this exhibition.

DD: What did you want?
Jake Chapman: I just knew it had to be good. So I said: if it's not good it's not getting in the exhibition.