Taken from the April Issue of Dazed & Confused, here Jake Phelps tells us how he gave his life to skating and doesn't regret a thing 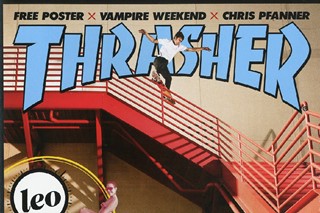 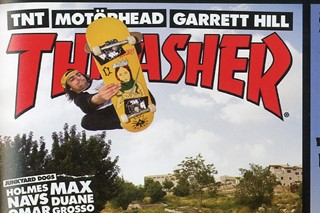 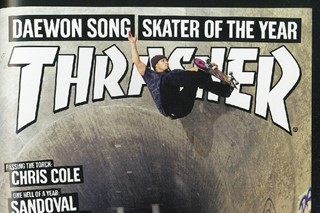 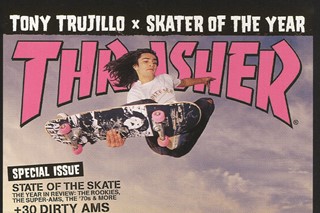 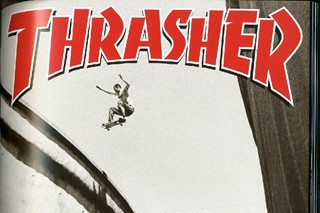 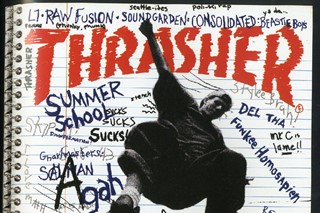 Born in 1981 and proudly kicking and screaming ever since, Thrasher has got a pretty solid claim on being the most important magazine in the history of skateboarding. Brash, anarchic and shit-talking in the best possible way, Thrasher the mag has been moulded in the image of Thrasher the man – its legendarily bolshy, sweary, speccy editor Jake Phelps.

I’ve been skating for 38 years, and I still skate every fucking day and it drives me nuts.
I’ve had multiple surgeries, I’ve broken both my legs, whatever, it doesn’t matter; what I’m saying is that skating is forever

With his tireless skate-rat enthusiasm, stubborn refusal to bow to corporate pressure and bottomless knowledge of the scene, the San Francisco veteran is one of the great living authorities on skateboarding, an accolade that we here in the Dazed Books Department hold right up there with the Nobel. We spoke to Phelps on the eve of the publication of 'Maximum Rad: The Iconic Covers of Thrasher Magazine' to discuss his gnarly legacy…

Dazed & Confused: What would you say is your attitude to the vast non-skateboarding world out there?
Jake Phelps: The best people I ever met in my life were skaters. I’ve met drug dealers, I’ve met graffiti artists, I’ve met DJs, I’ve met fashion people – I’ve met everybody – but the best people I ever met were skaters. And that’s why I stick with skating. I’ve been skating for 38 years, and I still skate every fucking day and it drives me nuts. I’ve had multiple surgeries, I’ve broken both my legs, whatever, it doesn’t matter; what I’m saying is that skating is forever. It’s what people wish that they had in their lives but they don’t. You can’t buy culture. Skate-boarding is a culture to itself, it’s our own thing; we speak our own language and shit. I’ve been to the Prado, I’ve been to the Hermitage, I’ve been to some sick museums, but skateboarding is still the only artform that’s relevant to me, in the big picture.

D&C: How do you feel about the appropriation of skate culture that we see so often in fashion, music and advertising and all that?
Jake Phelps: We laugh! Because it’s corny as shit! You can tell that people want to bite it because skateboarding is the hardest fucking thing known to mankind. I mean, Rodney Mullen: shit, come on! It’s fucking hard! It ain’t no friendship club, that’s for damn sure. And now you’ve got rappers like Lil Wayne trying to get into skateboarding. Any saturation of skateboarding into the mainstream is good, in a way, because it’s good for us. But at the same time, it’s corny as fuck. What’s sad but true is that a lot of the clothing companies that suck are what’s propelling the industry right now. So now you can buy the skateboard look and look like a skater, but not ever take a hit in your life. If you’re dressed like that and you’ve never slammed on a skateboard, then you know that you’re just fucking lying to yourself, basically.

D&C: So now skateboarding is a multibazillion dollar industry and you’ve got 250,000 readers. Do you feel a weight of responsibility on your editorial shoulders?
Jake Phelps: Oh no, not at all. Skate-boarding can just seep into every crack it ever wants to. At Thrasher we merely document what’s happened over the last 30 years. If you look back on Thrasher, it’ll always tell you straight: ‘That park closed down because the dude was a dick.’ That’s it, that’s the way it works. I don’t feel the weight of it because I’m just a skater like anyone else. When my boss (Thrasher co-founder Eric Swenson) killed himself last year, I was like, ‘Well, that’s pretty much the hands-off now. I can do whatever I want from here on in,’ you know? I don’t have to worry about nobody telling me what to do. When I dropped out of school, they told me I could never do anything or go anywhere, and then when I got the keys to the mag, I was just like ‘Alright, watch this, motherfuckers!’ And I went everywhere.

D&C: What was it like when you took charge of the mag?
Jake Phelps: Well, I came up from the mailroom. Nobody who worked there at the time skated, but they knew I was a skater… They offered me it, and I figured fuck it, I could write a caption and all that. And then they gave me this credit card and said: ‘You’re in charge; take your boys on a skate tour, get on the road and go find out what’s out there.’ So I was like, ‘No. Fucking. Problem.’ And I took [John] Cardiel, Julien [Stranger], all my boys. In the beginning, with the people I rolled with, we’d sleep in the bushes – we didn’t give a fuck about where we slept. It was a Hell Ride, that’s what we did, that’s what we called it. We’d just go Hell Riding. You’d sleep in the dirt. Sleep at the skatepark. Start a fire, have some beers, pass out, wake up and do it all over again.

D&C: You’ve had this pretty anarchic stance from the get-go then?
Jake Phelps: Oh man; when we were little kids, somebody would build a ramp, and they’d say we couldn’t skate there, and we’d say, ‘OK, it’s cool.’ And then we’d come back later on that night and we’d burn the ramp down. We’d be like, ‘Fuck it, OK, we can’t skate, nobody skates. How’s that, fucker!?!’ We were, you know, just bad kids. And skateboarding as a culture was inherently bad. And now it’s all cool, and there’s all these (Ryan) Shecklers, and Mountain Dew tours and all this other ridiculous nasty shit. But skateboarding is not a team sport, it’s fucking you against the world.

D&C: What is it that makes for a good Thrasher cover, yathink?
Jake Phelps: I like the look in their eyes. It’s not necessarily always the gnarliest trick. Sometimes that works for us, because it starts off the mag like, ‘Woah, check this out: the guy feeble ground 20 stairs, that’s gnarly.’ But sometimes it can just be a portrait, or our Neckface cover, which was pretty good – some art shit, something different. There’s no rocket science to it; the secret is just getting it on the newsstand. If we can’t get it on the newsstand, nobody’ll buy the fucking mag. And that’s a bitch, because all that’s changing. We’ve been delisted from Safeway, we’ve been delisted from a lot of places over content. Because we say real shit: we tell it how it is. We’d love to be big on the newsstand, but not a lot of places sell the fucking thing these days.

D&C: Do you have any big regrets?
Jake Phelps: I gave my life to skateboarding, you know? I fucked up. I don’t have no kids, I got no wife, I got nothing. I just skate. But I don’t regret it at all. I would never change a lick. I mean, it’s awkward at times to explain it to people. My dad’s still like, ‘You still skate?’ and I still have to say, ‘Yeah I know Pops, it sounds ridiculous, but yeah, I still skate.’ Because there’s nothing better flying down a fucking hill at 40 miles an hour and realising that if you don’t make it you’re going to die, and I know it sounds like a fucking Red Bull commercial, but I am an adrenalin junkie. I just love skating, I love the sound of it. When people get psyched on making a trick, the look on the little kids’ faces, when they make something they never tried before. Those little things, that’s what keeps me hyped on skating. And you can’t buy it, you can’t buy credibility. People know who I am because they know I gave everything to skating. People know I’m the real deal, I’m not clowning it. I don’t give a fuck about what costume you wear, I just care about skateboarding, here and now, and that’s it.

Maximum Rad: The Iconic Covers of Thrasher Magazine is out now, published by Rizzoli