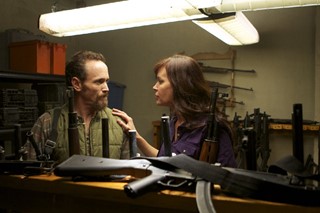 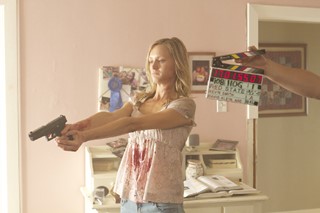 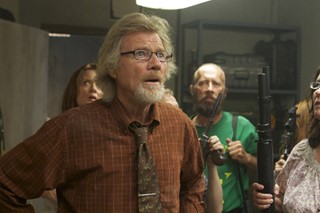 Certainly Kevin Smith’s most mature film to date, 'Red State' takes a bare-knuckle swing at religious extremism and hypocrisy. True to his comedy heritage though, the film begins with a gaggle of sexually frustrated friends who plan a trip out of their small town lured by an advert they fumbled across on a sex site. Their trip doesn’t go as planned, and they end up as prisoners of a bunch of hillbilly religious fanatics obsessed with wiping out the minds of anyone capable of naughty thought.

A genuinely gripping, claustrophobic thriller liberally sprinkled with dick jokes, and stunning performances from John Goodman as the conflicted sheriff and Michael Parks as the bilious preacher. In the States Smith has bypassed the usual marketing and distribution channels and is taking the film out on the road himself. Dazed Digital went to go and speak to him about religion, Madonna and the power of drugs.

Dazed Digital: You've spoken before about your Catholicism in a positive way, was Red State posed as anti-religious?
Kevin Smith: Oh well, is it anti-religious? I guess it’s anti-religious. But just like Dogma, it cocks an eye at any organisation built around spirituality. Like the idea of spirituality is beautiful and pure, whether you believe in God or not, the fact that you give something up to a higher power, most people kind of go along with that. Once you start building an organisation around it, ‘these are the rules, mother fucker, and here’s who’s allowed and here’s who’s not.’ Once you start separating people with it, that’s when I find it interesting, that’s when I like to put in a film.

DD: Are you taking aim at a specific group?
Kevin Smith: Yes definitely, hands down the Westboro Baptist Church. That organisation run by Fred Phelps and his family, they were the leap off point. These are the cats that show up at funerals and whatnot, holding up signs telling the parents their children are going to hell. Now they show up at cemeteries where they’re burying Iraq veterans. You guys have figured how to keep them out of this country and Canada, but in the States we deal with them a lot. They are fucking loud. You would imagine for the amount of media penetration they make that they wouldn’t be as small as they are.

DD: Have you had direct contact with them?
Kevin Smith: Oh fuck yeah, they protested us twice. They came Sundance to the premier, and they announced they were going to protest. They protested me once before. They don’t give a shit, they just want any platform to preach their gospel, which is simply that ‘God hates fags’.

DD: Was the motivation to distribute the film yourself financial or political?
Kevin Smith: More artistic than anything else. After nearly twenty years of letting people put my movies out and watching them sell them, sometimes incorrectly and often with way too much money, I thought I can do this better, I could do this smarter. I know directly how to get in contact with the audience. Marketing is all about fucking spending money to let people know a movie’s coming, I can let the audience know directly that my movie’s coming, I’m in contact with them on Twitter, on Podcast networks.

We just took the movie out without doing it traditionally, without spending on TV commercials or newspaper or magazine adds or billboards, just using word of mouth and sitting on Twitter every morning or doing radio interviews or getting on TV when I can. So we sold it without spending any money. We’re in the black now in the states, like when the movie came out.

DD: Have you consciously been changing your film style?
Kevin Smith: It’s weird to say this, but I took the lesson from Madonna of all people. For years I’ve been watching this chick, she changes every two years, she would change everything you knew about her. She’s material Girl, now she’s wearing bullet bras, now she’s vogue, now she’s British. It’s important because if you’re going to create art, you got to engage the audience, and as an artist you got to give them shit they don’t expect every once in a while.

Red State is out this Friday

Your guide to a safe acid trip
Arts+CultureIncomingKevin Smith