The Portuguese artist, inspired by Jules Verne and astronomy, earlier this year put on a show examining idea of another world via its unique context of display, combining painting, drawing and sculpture 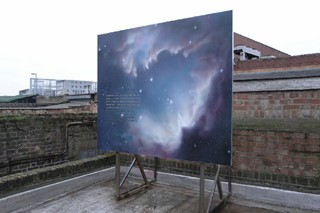 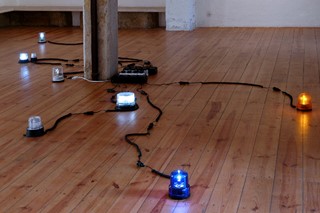 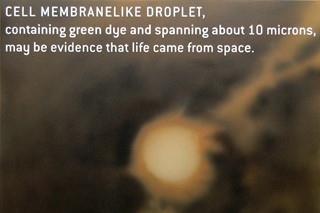 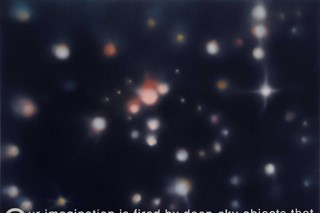 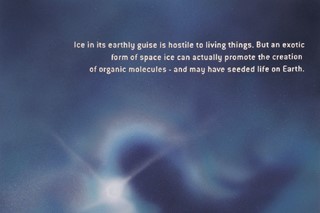 Exploring the etymology behind the words ‘altero’, meaning the other of two, and 'world', originally meaning life on earth as opposed to the afterlife - Lisbon-born, London-based artist Inês Rebelo took over a small local pub in South London's Peckham earlier this year, 'The Bun House', with a unique exhibition called 'This Otherworld'. Bringing together several of the Goldsmiths graduate's works, the exhibition examined the idea of another realm via its unique context of display, combining painting, drawing and sculpture.

Sparked by a love of Jules Verne and astronomy, her pieces feature names like '37 Cluster' (2009), 'Centauri' (2011) and 'One Day in Saturn #2' (2011), (an eerie ten-hour clock replacing the usual pub clock alongisde an existing clock as a crucial remainder of the outer-life beyond the pub), which all play with inspirations from science fiction to architectural sources.

Dazed Digital: Sci-fi and astronomy feature predominantly in some of your work, why are the impacts of nature and science a significant source of inspirations?
Inês Rebelo: My interest in science fiction and astronomy developed from an initial interest in architecture projects, as strange as it may seem. I was interested in potential interventions in our surrounding landscape, mostly through architecture plans, and suddenly I found myself drawn to scientific sources. The methodology of project in architecture, premeditated and rigorous, seemed somehow akin to scientific scrutiny, as a similar way of relating with the ‘natural’ world. This relationship would become visible, for instance, in scientific readings of the movement of ice sheets on the Antarctic, or in systems of classification of the clouds, or on the identification of groups of stars with constellations, and so on and so forth.

Progressively, I was more and more drawn to cosmic events, distant places, and I surrounded myself with increasingly more references to astronomy, particularly to the night sky. The presence of astronomy-related imagery in my work was more a result of a process than it was a product of one decision alone. At a very early age, I read several Jules Verne books, and they really fuelled my imagination and created a sense of curiosity about what may be out-there. Much later, whilst at Goldsmiths College, I became fascinated with the idea that science fiction can be looked at as a hyperbolization of the present times, with a strong connection with technological or scientific dispositives, often offering a critical reflection.

DD: How has this translated in your work?
Inês Rebelo: There was one particular work I did, titled 'Toasted by the Sun', from 2005, which was the first piece that intermingled astronomy and science fiction. It was a painting, where there is a bright red sunset, as if it was Mars. The painting only used red tones and black shades, with text. There was a tension between what you could get from the image alone, all sorts of possibilities, and how the text would try (and fail?) to provide a unique explanation to what seemed completely fictional. The piece itself was made in a very tight reference to a source from a scientific publication.

Another piece of work I did between 2005-9, was a sequence of small science fiction playing cards, titled Where to go?. I would constantly go to the Forbidden Planet store, in Charing Cross and, in a field-trip mode, I would collect different decks of cards. Systematically, I would use them not to play any game, but by erasing with a black edding pen all the bits of information, which were not pieces of alien landscapes. In the end, I ended up having a parallel game, which was more like a rigorous collection of seemingly otherworldly fragments of planets and meteorites. It was as if they were being gathered from distant space travels and scientifically catalogued for future inspection.

DD: How did you aim to explore them via the medium of art/photography? Do you think there are inherent links between them?
Inês Rebelo: I look at photographic images very often, mainly when researching scientific magazines and books about planets, stars and other cosmic phenomena or events. Many photographic images come from telescopes, like the Hubble and such, and some of those are composed based on abstract colour codes that don’t necessarily obey to the visible spectrum detected by the human eye. Other images combine different shots or present the results of particular data. On many occasions, the images I am keeping seem to me to bring closer very distant places, perhaps places where it would be impossible to have any human presence at all.

Mostly, I use these varied photographic source material in rigorous depictions in paintings, working with enamel spray paint on to aluminium. The act of changing the initial scientific context and the idea of a minimum translation with a minimum of subjective changes has been consistent in several works. The process of working with spray paint is something very detached and ‘non-handmade’, but at the same time the particles of paint being projected in clouds create a eerie feeling of something subtly breathed or whispered, which I have come to recognize as a paradox.

Other works of mine, especially installations, use common everyday objects like soup bowls, clocks, umbrellas, a car or camping tents. These projects do not tightly reference a particular photographic source material as the paintings do, and tend to focus on overlooked daily objects. Lately, I have combined different media, ranging from painting, drawing to installation in an attempt to open a space in between for the viewers to navigate.

DD: You're from Lisbon but are currently based in London? What have you found to be the greatest differences in creativity between the cities?
Inês Rebelo: Having been born in Lisbon, I have always been used to urban environments. I like cities. I have been living in London for most of the time since 2004. In comparison with Lisbon, I think that here in London there is a challenge created by the wide range mix of cultural backgrounds, which I wouldn’t know how to live without, anymore. Perhaps this circumstance creates an environment for more experimentation, which so far seems to suit me the most.

DD: What up and coming projects are you working on?
Inês Rebelo: Right now, I am preparing a group show in Germany, at the Speyer Kunstverein. I am working on a new painting, which looks at our physical location in relation to the observable universe as a whole. The work uses text notations in German language, which I have never used before. I though it would make sense to use the native language in the piece, since it will be very diagrammatic with an existential vanitas tone to it, referring to location.

At the same time, I am looking at possibilities in combining a selected group of paintings with an installation, which considers the constellation Ursa Minor. The installation makes use of several light beacons that are commonly used by the Police, Fire Services and other emergency agents, combined with synchronized timers. The work is a direct continuation of Polaris, a 2010 work made specifically for an exhibition at The Old Police Station (London). The orchestration of the lights in Ursa Minor needs to be studied as much as the connection between the installation and the selected paintings. The final decisions are only done at the space of the exhibition, and everything is pretty much work in progress at the moment.

Your guide to a safe acid trip
Arts+CultureRise