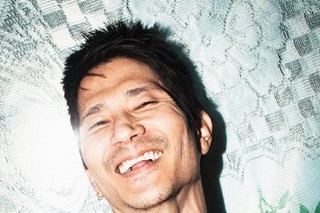 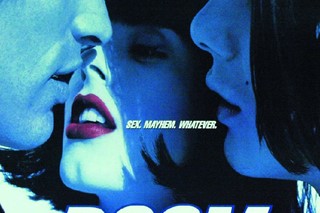 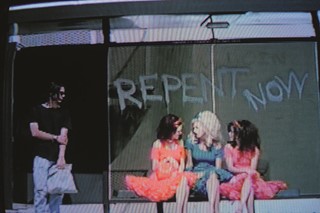 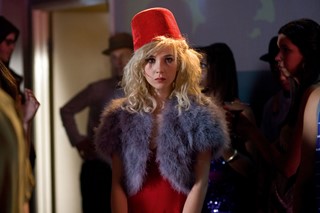 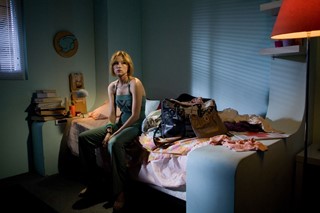 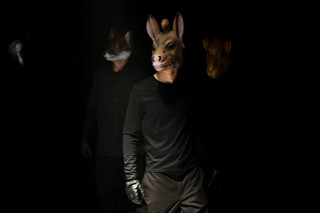 Teenagers visiting the multiplexes of America in 1991 found Kevin Kostner’s face plastered on every billboard. Hollywood fare wasn’t exactly capturing the spirit of the times: the first Gulf war monopolised the news, LA was about to explode into riots, and the spectre of HIV/Aids loomed overhead like a radioactive cloud. Act-up protesters threw cremated ashes onto Bush Senior’s White House lawn that year, and macabre open-coffin funerals processed through the streets. But deep in the underground film scene, a trailblazing batch of young filmmakers christened the “Queer New Wave” were confronting subjects the mainstream avoided, and were becoming hard to ignore. Gus Van Sant’s tale of gay street hustlers My Own Private Idaho hit the screens, as well as Derek Jarman’s Edward II and Todd Haynes’s Poison, inspired by rebel outsider Jean Genet. One film however, arrived cloaked in rumours that its controversial content was igniting fist fights in Los Angeles bars. The Living End was shot with guerrilla charm, little obvious acting ability and the kind of energetic freshness that had marked Jean-Luc Godard’s Breathless decades before. It belonged to cult provocateur Gregg Araki, and kick-started a career that would crown him the patron saint of misfits, fuck-ups, and sexually confused teenagers everywhere.

Watching it today, The Living End plays like a savagely humorous time capsule of its era. It opens on a gay, HIV-positive hustler in a sleeveless Jesus & Mary Chain t-shirt, spraying “Fuck The World” in dripping red letters across a wall in the Hollywood Hills, before launching the can into the smog of Los Angeles below him. A twist of fate leads him to another HIV-positive Los Angeleno (this time in a Morrissey t-shirt) and with “nothing to lose”, the pair take off on a killing spree across the city to the sound of Nine Inch Nails, Braindead Soundmachine and Joy Division. Written, directed, edited and shot by Araki with just a spring-wound 16-mm camera and $20,000 borrowed from his producer’s mother, it was angry and ragged around the edges – a Bonnie & Clyde for the Act-Up generation. “Those years were like living in a war zone,” Araki says. “Young people today have no idea what it was like to be 25 and think, ‘I’m going to die.’ People were talking about sex and death and what their life was worth on a daily basis.” Although he claims it was inspired by 30s screwball comedies, The Living End’s anarchic energy owed more to Sid and Nancy than Cary Grant and Katherine Hepburn. “It is without a doubt the riskiest, most dangerous movie I’ve attempted,” Araki said at the time. “Which is precisely why I wanted to make it in the first place.” In the credits, he dedicated it to post-punk musician Craig Lee, and “the hundreds and thousands who’ve died and the hundreds and thousands more who will die because of a big White House full of Republican fuckheads.”

Two decades and ten films later, a jet-lagged and genial Gregg Araki is settled in the corner of a Mayfair hotel, describing himself as “older, more mature, more grounded, more comfortable in my own skin.” He’s in London with his latest feature, Kaboom, and after goofy stoner comedy Smiley Face, and the acclaimed drama Mysterious Skin, this one is a conscious return to Araki’s early 90s roots. Plenty has changed in these post-Will & Grace times, but the filmmaker continues to neatly divide his audiences. Fans have described Kaboom as a Twin Peaks for the Facebook generation. Detractors compare it to a soft-porn episode of Saved By The Bell. There doesn’t seem to be much middle ground. “People love my films or hate them,” Araki shrugs with a smile. “It doesn’t bother me. It’s more fun to get a great review than, ‘This movie is a piece of shit, Gregg Araki should be hung in the town square.’ But I definitely have a core audience. I guess the Coachella-types are my tribe.”

Raised in middle-class, suburban and uncontroversial Santa Barbara, the Japanese-American filmmaker emerged from film studies at USC in the mid-80s steeped in Godard, Hitchcock and Howard Hawks, a self-described “film school brat”. But he was also immersed in the LA punk scene, and an artistic black sheep determined to shine a light on the edges of society that had gone unrepresented. “The message was really to march to your own drum,” he remembers. “It doesn’t matter if you’re a freak or weird or outside the mainstream. That was one of the most liberating, awesome things about punk rock music. I got that from music at a really early age and it’s definitely informed the sensibility of everything I’ve done.”

In Kaboom, The xx, The Big Pink and Yeah Yeah Yeahs soundtrack the subject that has always fired Araki’s imagination – hormone-fuelled, angsty teenage years. “It’s sort of a nostalgic look back at that time of your life when you’re a total unwritten book – when you could become the President of The United States or a crack addict,” he says. Intentionally shot to feel like you’re flicking through the pages of a fashion magazine, it’s a hyper-stylised pop explosion of beautiful Californian eye-candy experimenting across all levels of the Kinsey scale. Set on a Southern Californian college campus, its lead character Smith is loosely based on the filmmaker’s younger self – a film school graduate with an “undeclared” sexuality. (Araki has had relationships with both sexes, and still prefers to un-declare, saying it’s nobody’s business). The rest of Kaboom’s labyrinthine plot is presumably less autobiographical – lesbian witches, psychopaths in animal masks, corpses in dumpsters, hallucinogenic visions, a Scientology-like cult and, possibly, the second coming of the Messiah, shoved in a blender and crammed into 80 minutes. With the right audience it’s a midnight movie to rival John Waters. “I wanted the pace of Kaboom to be relentless, so it was effortless to watch,” Araki explains. “It sucks you in, it never drags... this crazy shit happens and suddenly, it’s all over.”

On set, his cast say they called that phenomenon “Kaboom-world” – a woozy alternative reality that feels something like falling asleep with the TV on, punctuated by Mel Gibson and Lady Gaga jokes, a shoegazey score and sex scenes that should keep the college dorms of America rewinding and rewatching. There’s blindfolded three-way sex, nudist beach sex, pre-exam tension-releasing sex, supernatural lesbian sex and even plain old heterosexual sex. “In America nudity is so taboo,” Araki explains with a laugh. “It’s one of my pet peeves – it’s rare for there to be a good sex scene in an American movie. There’s a weird double standard, because it’s a sex-obsessed place, but there’s a sense of shame about it. It’s one of the many things in America that is not very healthy.”

Araki has long enjoyed driving angry stakes into the heart of America’s religious and social conservatism: he earned his cult stripes with three films, Totally F**ked Up, Doom Generation and Nowhere, aka the “Teen Apocalypse Trilogy”. His alternateen casts reinvented the John Hughes flick for real misfits: they throw “turkey-baster insemination parties”, go on dates to see the Kamikaze Dildoes and attempt suicide by drinking whisky and Mop & Glo. Most controversial was Doom Generation. Its nightmarish vision of LA conjures up a “fluorescent shithole” of 7/11s, fast-food and blood-red motel rooms. Nihilistic teenagers commit aimless murders, billboards shout “Pray for Your Lost Soul”, and the garish violence culminates in one teenager getting his genitals sliced off with a pair of shears by neo-Nazis singing “The Star-Spangled Banner”. Press screenings emptied in disgust. Doom achieved the rare distinction of getting no stars at all from some critics, while the Washington Post’s verdict was brief and brutal: “An arty atrocity for thugs and sub-literates that makes Natural Born Killers look like The Sound Of Music.”

But if his defiantly non-commercial films didn’t speak to the mainstream press, they certainly spoke to a generation of adolescents tired of being fed anodyne teen plots scripted by 50-year-olds. Nowhere was described as “Beverly Hills 90210 on acid”, but unlike Luke Perry and co, Araki’s beautiful LA youth were actually teenagers. Over the years his uncanny intuition has picked out handfuls of future stars. Rose McGowan, Heather Graham, Ryan Phillippe and Mena Suvari all show up with dewy-fresh faces, well before the mainstream caught up with them. “It’s so fun to work with people who are untapped,” he says. “It’s the same with Kaboom – the cast were all so brave and courageous and totally committed to the movie – they walked the plank. They’re part of that generation that embraces challenging roles, likes taking risks.”

Last year, many of his young actors joined Araki when he took Kaboom to Cannes with some trepidation – Kaboom doesn’t immediately strike you as a film that would prove popular on la Croisette. “We were told Cannes audiences boo,” remembers Thomas Dekker, who plays Kaboom’s pale-faced, skinny star Smith. “We were prepared to expect some negativity.” They weren’t expecting the 3,000-seat Palais to erupt in cheers and a standing ovation that stretched over ten minutes. “I literally started to cry,” Araki remembers. “That theatre is like a football stadium. To be in this place that reeks of film history, to be there amongst the giants was so overwhelming…the whole thing was like a dream.” That week, Araki became the first ever recipient of Cannes’s Queer Palm, and the film school brat inside him must be rightly proud. “A friend, Gus Van Sant gave me the best advice once,” he muses. “He said make things that you love, tell stories you want to tell, and hope for the best – you never know, and you just can’t think about how people will react.” Somehow, Araki has managed to do just that, while still fanning the punk flame he lit over 20 years ago. With Kaboom set loose on screens, the filmmaker is already compulsively storyboarding a new batch of film ideas. Like his loyal cult following, Araki gets a kick out of ditching the real world and escaping into that vivid, trippy one of his own making: “You get to write your own rules. You’re in this other world that is stylised and beautiful, this dreamy, wild place. And then…” he pauses for a moment and shrugs, “And then it’s back to boring reality.”

Kaboom is out on June 10

Special thanks to The SHOP Yoga Studio, Park City, Utah