In ‘Made Of Smokeless Fire’, her ongoing project, the French-Algerian photographer explores what it is like to come out as queer within France’s Islamic community

Despite having the largest proportion of Muslims in the Western world — estimated at 8.8 percent of the whole population according to recent data — “Islamophobia is omnipresent in France”, photographer Camille Farrah Lenain tells Dazed. “At the intersection of discrimination from sexual orientation, gender identity and racism, LGBTQI+ people of Muslim culture are fighting against these inequalities while redefining their own religious heritage.”

Lending her lens to France’s Muslim queer community, in her ongoing project, Made Of Smokeless Fire, the photographer delves into the experiences of its members “to bring to the surface the multiple, contrasting layers of their identities,” she says.

Gathering portraits and interviews with LGBTQI+ individuals with Muslim heritage living all across France, Lenain paints a picture of Islamic culture that is far more nuanced than its traditional understanding. In doing so, she pays homage to her uncle Farid who, diagnosed with AIDS and diabetes at a young age, died in 2013.

“Though everyone knew, the fact that my uncle was gay was something my family would never really address in depth or mention around my grandparents,” explains the French-Algerian photographer, who grew up in Paris along with the Muslim side of her family. For Lenain, Made Of Smokeless Fire is a way of tapping into the untold chapters of her uncle’s life, filling the gaps left by his passing.

Sparked by the activism of Ludovic-Mohamed Zahed, the gay imam behind Europe’s first mosque designed to accommodate LGBT and feminist Muslim communities, the photographer began to work on this project in 2019. Having come in contact with Zahed’s inclusive network during one of his Marseille-based initiatives, Lenain started to photograph people who — like her uncle — carried these plural identities, lensing them as they retraced their coming out journey. Through her first sitters, she met more, eventually taking her gaze anywhere from Marseille to Lyon and back to Paris.

“When you see a portrait of someone followed by their words, there is no way for you to contradict them: their story is there, right in front of you” – Camille Farrah Lenain

Just like the “djinn”, the impalpable spirits that, in Islamic mythology, are thought to take on different shapes — appearing to people as snakes, scorpions, humans, and more — Lenain portrays the protagonists of her series as if they were made of smokeless fire. “Though djinn are neither inherently good nor bad, when [someone] comes out as gay within the Muslim community, they can be told that they are possessed by one of them,” she says. “By referencing their changing nature in the title of the project, I strived to recast a traditionally negative image into something that embodies the multifaceted upbringing of those appearing in it. Similarly to what happened with the word ‘queer.’”

Reflecting on the significance of Made Of Smokeless Fire for the wider public, the photographer says she hopes people will find themselves, or anyone else they may want to see, in it. “Unable to capture every person’s individual story, I am hoping to voice as many of them as possible for viewers to resonate with them,” Lenain says of the goal of the series. “When you see a portrait of someone followed by their words, there is no way for you to contradict them: their story is there, right in front of you. It is written down; it is a moment in time. It is what this person said, and you can’t ignore it. Instead, you are called to listen carefully to it and understand it.”

Take a look through the gallery below to see Lenain’s portraits and read the words of the LGBTQ+ individuals of Muslim descent featured in Made of Smokeless Fire. 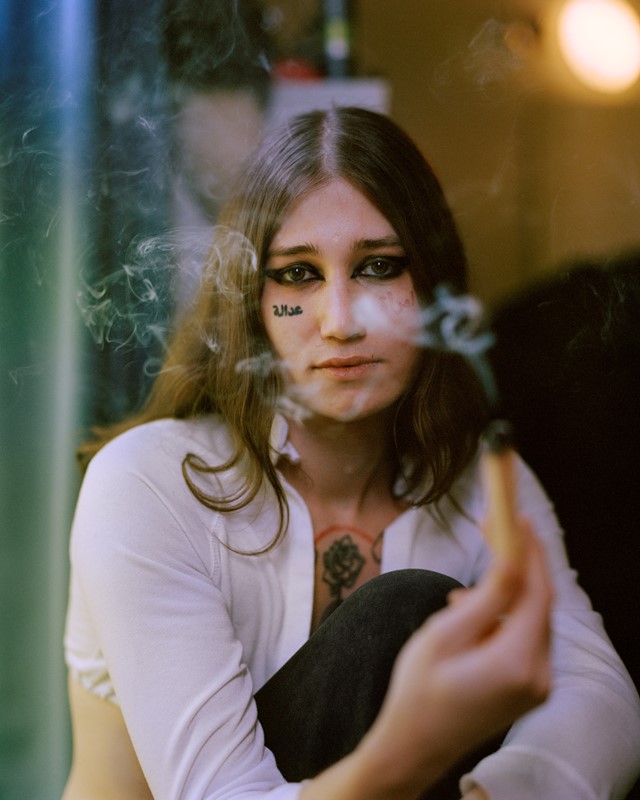 “I went to Marseille with a friend of mine in 2019. At that time, I was wearing a t-shirt, shorts, I had my beard, short hair and everything. I even had some pecs, strong shoulders. On the third or fourth day, this girl stopped me. She looked just like the singer Dalida, but make it trans. ‘I’ve been seeing you a lot these past few days and I hope you won’t take this badly,’ she said. ‘Are you a girl? You have the aura of a woman.’ I stayed to chat with her, she told me about her life, and then she just disappeared. I never saw her again after that. An angel” – Yasmin (Paris/Turkey) 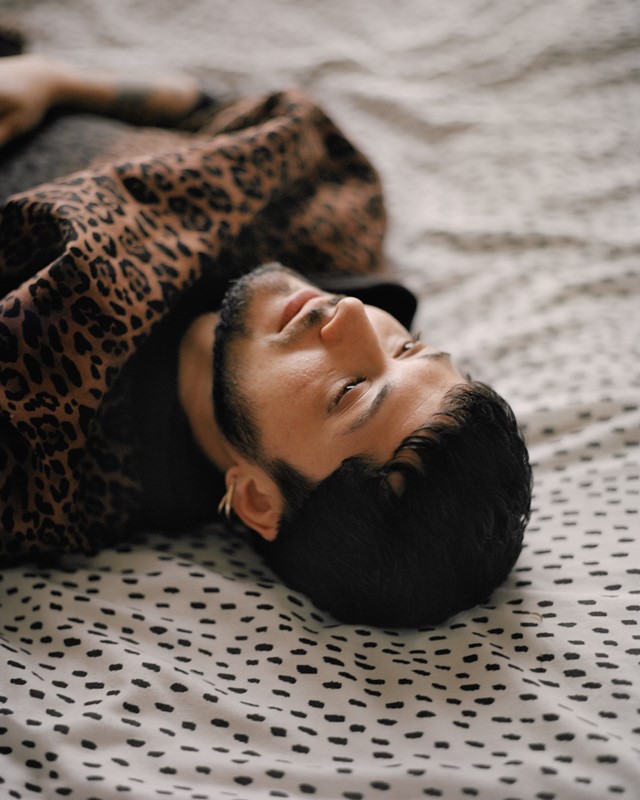 “My father almost died about ten years ago. I caught myself reciting surahs from the Qur’an, even though I hadn’t done it in years. He used to hit me with the belt, but I don’t hold it against him. Obviously, it kept us apart for a while, but when I see him sick, it still pains me. He now has a disease called supranuclear palsy. I try to find as many things as possible to bring me closer to him because when he leaves, no one will be able to transmit this culture to me. My Muslim culture is very intimate, just like my father said. ‘Your religion only concerns you; it is you who lives it,’ he told me once. That really stayed with me” – Jasmin (Paris/Reunion) 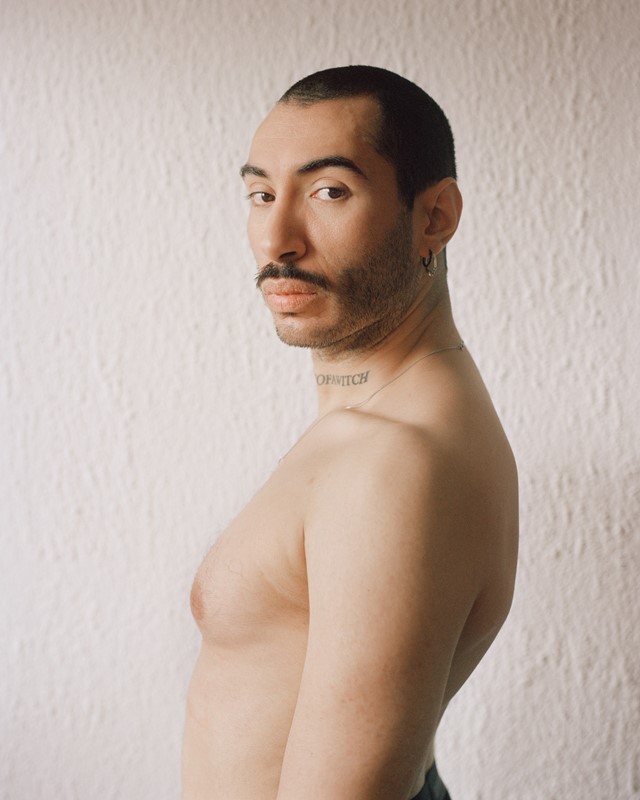 “My family perceived femininity in me, so they tried to contain it, to repress and expel it. Why do I dance? A boy doesn’t dance. A boy is supposed to love football. I didn’t like football. A boy is supposed to like Dragon Ball Z, and I preferred Sailor Moon. There was always that suspicious look my uncles would give me when I was six or seven, but I have never been directly attacked in regard to my homosexuality within my family. My mother knows, my aunts are aware. If you ask me, I don’t hide it. But they are all in denial, stuck on the taboo” – Kacim (Lyon/Algeria) 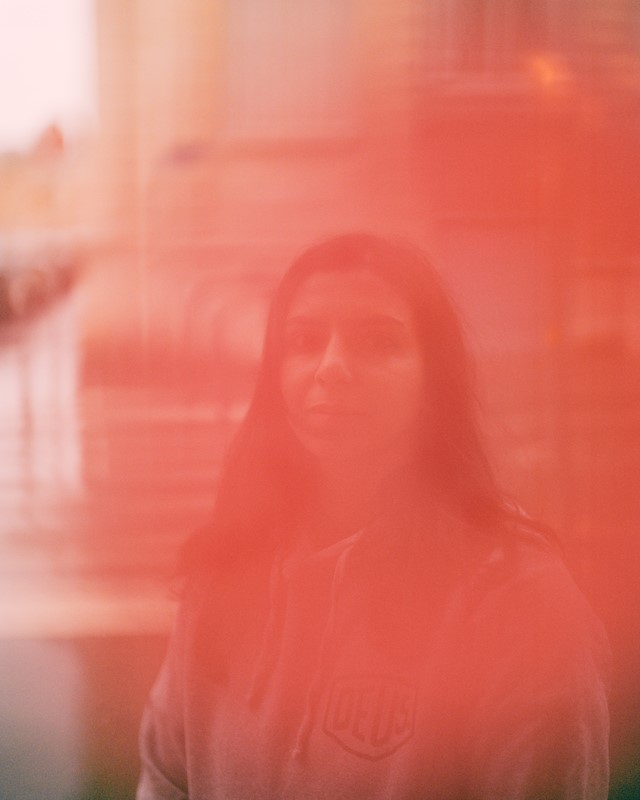 “I still can’t believe mankind decided there were rules that had to be followed. I don’t really like rules. If there is a merciful God who has made us in his image, knowing the purity of our soul, he wouldn’t put us in hell and let us suffer horrible punishments simply because a woman loves another woman, or a man loves another man” – Tania (Lyon/Algeria) 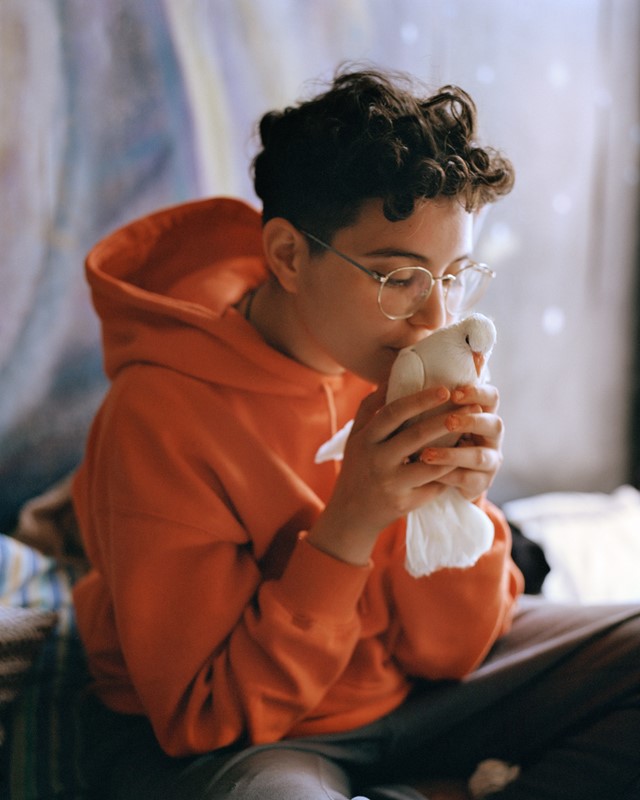 “The pigeons are a gift from my mother because we made peace not long ago. For a while, I was really at odds with my family. My mother started having a lot of health issues, and I decided to sort things out while she is still alive. I don’t want her to die in the midst of a conflict, because her death will be a snapshot of that moment in time, frozen for eternity” – Amina (Marseilles/Algeria) 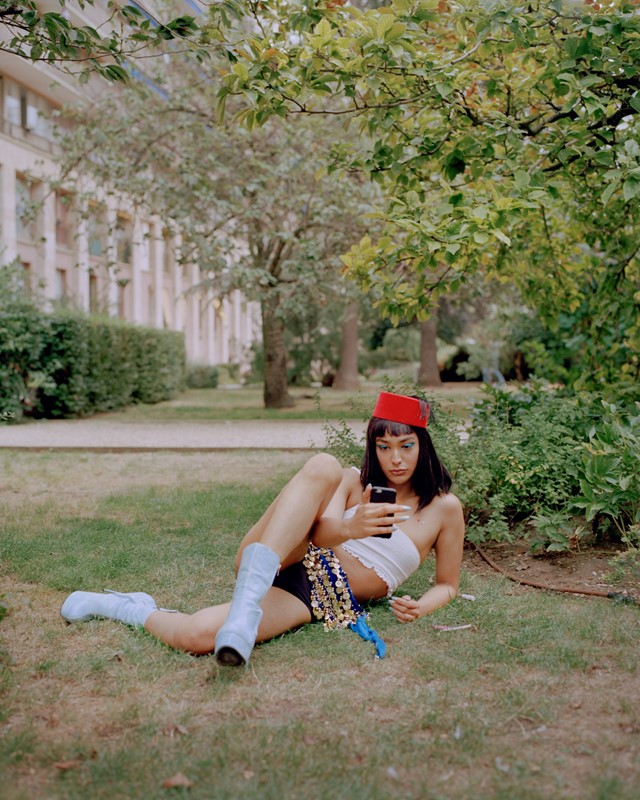 “I experienced so much violence before I even understood the person I was. When I was four years old and people told me, ‘You are a tomboy.’ When I was ten and they told me, ‘You are a fag.’ It’s funny how the perceptions that others have of you can change depending on where you are in the world, depending on the culture, depending on how people were educated, and how they grew up. It is through the eyes of others that you can tell that I am a trans, Moroccan and Muslim woman, or whatever the fuck you see. But to myself, I’m just a badass girl named Lalla Rami” – Lalla Rami (Boulogne/Morocco) 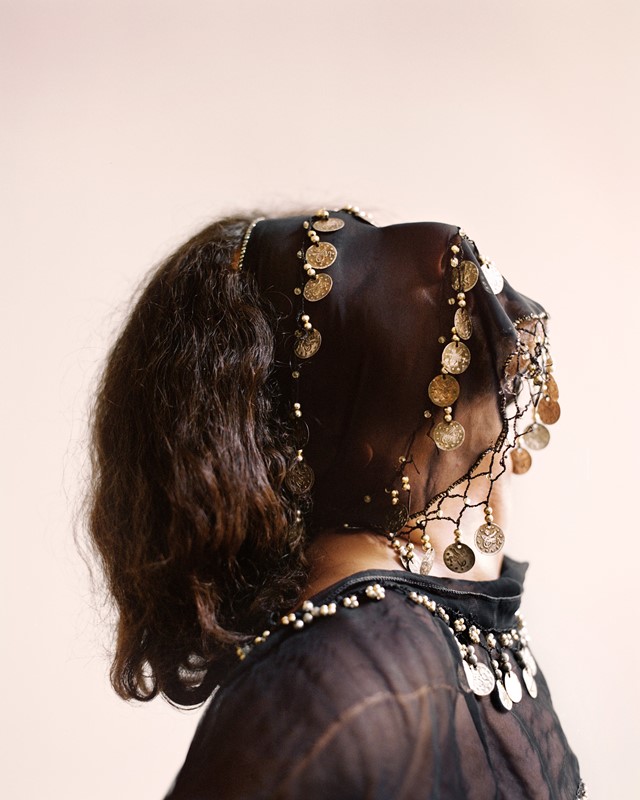 “This is who I am. And I will love who I am. I am Muslim. I practice my religion. And nothing about this has changed. This is who I am, and I need to be who I am. Because I am me. I am a woman. I must be a woman. And do you know what I think? I will be a woman” – Ramziya (Marseilles, Syria) 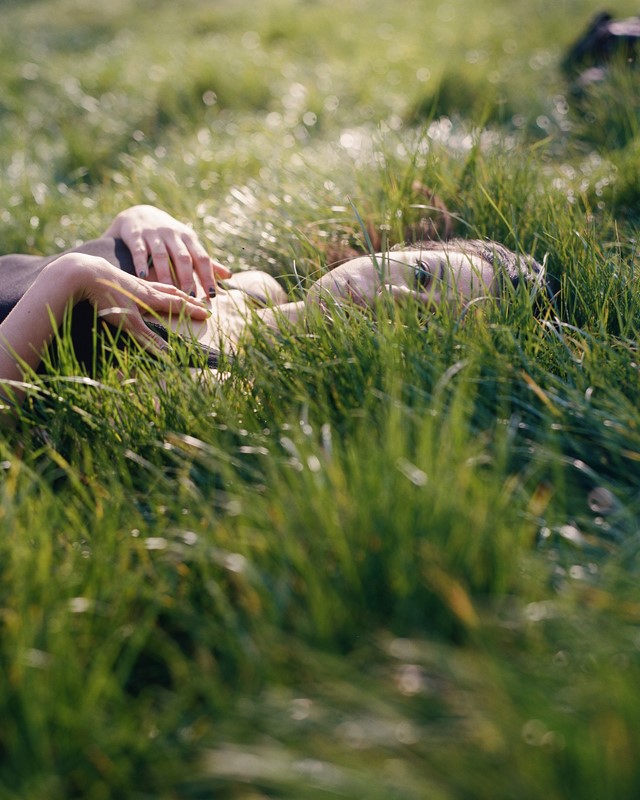 “I can’t choose between my queer identity and my Algerian identity, the two nurture each other. It is not just a simple sexual orientation, it is not just an identity, it is your whole being. It is not cultural or a construct, it is something that is part of you. You don’t choose your sexuality. Even in the Western world, it is difficult enough to be homosexual. If we had chosen the easy way, we would not have chosen this” – Lucie (Paris/Algeria) 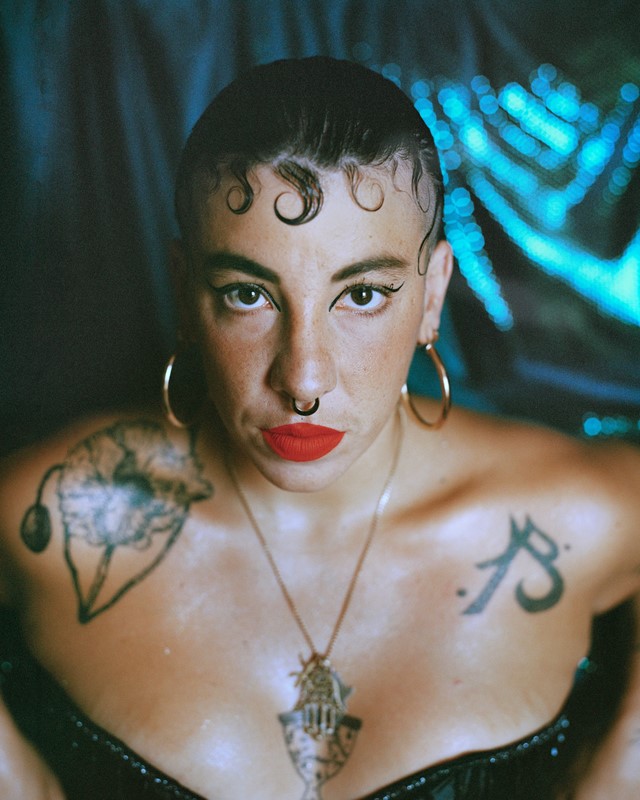 “I came out as queer nearly 15 years ago and, to this day, I know that I wouldn’t be able to live in Algeria, even if I wanted to. Still, it is a myth to think of France as advanced when it comes to supporting LGBTQI+ people’s rights: through the years, I have endured a lot of attacks, especially on the street. I was tired of not seeing my experience represented anywhere. So I decided to take it upon myself, to stage and create a character who could embody this intersection of identities. For me, identity is not a status quo but a lived experience. And therefore, my life, my reality, is double. I am no less a dyke than I am Algerian, I am no less Algerian than I am a dyke” – Habibitch (Paris/Algeria) 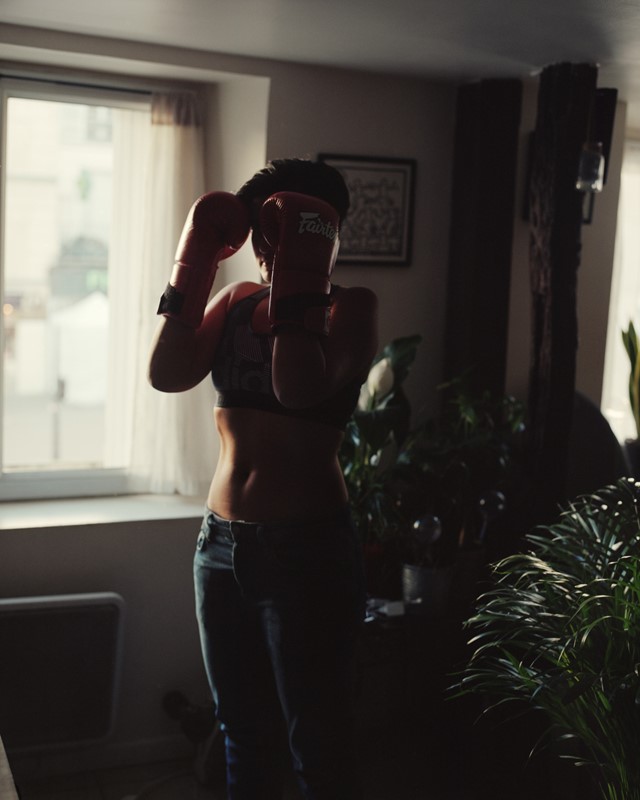 “What I really miss is having role models in films, TV shows, or mangas. Not finding yourself represented anywhere is very hard. I honestly didn’t expect to live beyond my 20s: I had this quiet conviction that I would die young. I always thought that ‘normal’ people – those who are heterosexual and find themselves represented in all media – manage to identify with what they see; to feel like they belong. For me, everything was a permanent blur but I still made it to 35, which feels crazy” – Manale (Paris/Morocco)

Join Dazed Club and be part of our world! You get exclusive access to events, parties, festivals and our editors, as well as a free subscription to Dazed for a year. Join for £5/month today