The artist’s new exhibition, Upon This Rock, explores subcultures, British identity, and the stories that are buried in their family’s past 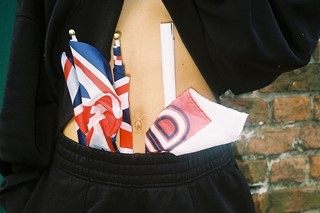 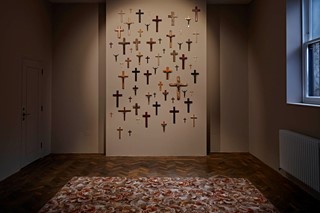 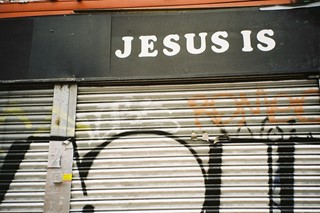 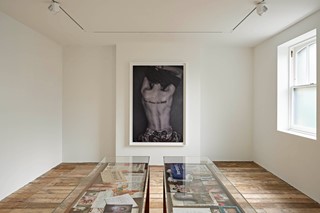 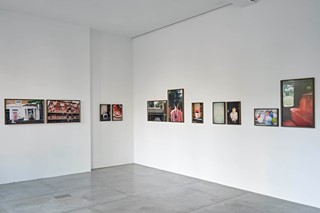 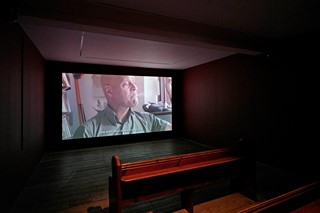 “I like to describe my work as existing in a meeting place of ‘rude(ness)’ – a quality of ‘interrupting’ or existing ‘in between’,” explains Rene Matić, the acclaimed London-based artist whose work brings together ideas of British identity, subculture, survival, family, and faith. Matić’s latest exhibition, Upon This Rock (currently running at South London Gallery), excavates generational trauma through a series of installations and films which present deeply personal narratives from Matić’s own background.

“Upon This Rock is the motto for my hometown of Peterborough,” explains Matić in a conversation over email. “It references a passage from the Bible in which Christ says to his disciple, Peter, ‘…upon this rock I will build my church; and the gates of hell shall not prevail against it.’ For me, it speaks to building something safe and sacred and strong on precarious, unstable and slippery terrain. It’s about modes of survival.” Lineage, roots, and our connection to place are threads which run throughout the work. Faced with Matić’s examination of sites of memory, we can’t help but think of our own home soil and the ground upon which we stand – on which our family before us have also stood – and upon which we build our lives. In this way, Upon This Rock conjures the uncanny sense of the past and the present existing in the same shared space. Matić says, “I’m really interested in how family histories reverberate through the generations, something I also explore in Many Rivers.”

Matić’s new film work, Many Rivers – which makes its debut in the exhibition – tells the stort of the artist’s father, Paul, unravelling the “ambiguity of his past” and the institutional prejudice that divided his father Julien from the white Catholic mother he never knew. “Many Rivers tells this story from four perspectives – Paul’s; my mother, Ali; my grandfather, Julien; and my aunty Lulu. Paul doesn’t know when he was moved to Peterborough. He doesn’t know when Julien was there and when he wasn’t. He doesn’t know who’s related to him. He doesn’t know about his Blackness, and he doesn’t know about his whiteness,” Matić tells us. “It’s also a story about the experience of existing as a mixed-race person during this period when laws protecting Black people in Britain from racial discrimination were being debated in parliament. Paul was seven when Enoch Powell made his ‘Rivers of Blood’ speech where he posed the threat that ‘in 15 or 20 years’ time, the Black hand will have the whip hand over the white man.’ The crux of these stories and the thread that runs through this film is one of working-class, diasporic survival; in some cases, solidarity and in most cases triumph.”

“Skinheads represent and celebrate the relationship between white working-class British culture and West Indian Caribbean culture. I carry that in my body. It doesn’t speak to me, it speaks of me and for me” – Rene Matić

If the work is about the materiality of place and the stories it evokes, it’s also about the body as a site of memory. Here, the body of Christ is truly omnipotent. Matić’s new installation, 60 and 25, alive (2022), consists of 25 bronze figures to represent every year of the artist’s life and 60 found crosses for every year of their father’s. “To crucify a body is to render that body un-useful – to take the life from a body whilst holding that body as a signifier for life. It is the representation of birth and death, reinvention, and liberty,” Matić elaborates. “I have used this symbol before. It has been helpful to appropriate it from white skinhead culture and use it in opposition to the right-wing co-option as a metaphor for the exhausted Black British body, and that still stands here.”

The artefacts and symbolism of faith intersect with Matić’s interest in skinhead culture. “This work connect The crucified skinhead is a longstanding symbol used by the entire skinhead subculture – i.e. both racist and non-racist or anti-racist skinheads. Skinheads often use it to convey a sense of persecution or alienation or that society is arrayed against them,” the artist says. What is it about skinheads that speak to Matić? “Skinheads represent and celebrate the relationship between white working-class British culture and West Indian Caribbean culture. I carry that in my body. It doesn’t speak to me, it speaks of me and for me. It’s where I came from,” the artist tells Dazed. “Subcultures provide hope for marginalised folks. Subculture is a way of imagining the self out of the situation you are in and knowing yourself out of that situation. So much power comes from that.”

Visit the gallery above for a closer look at Upon This Rock.