The artist’s latest exhibition, Monsoon Season, explores the sensuality, humour, and mundanity of everyday life and hanging out with friends while the world burns 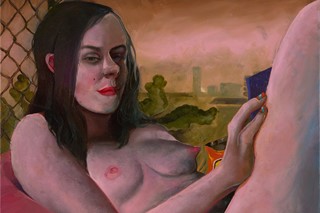 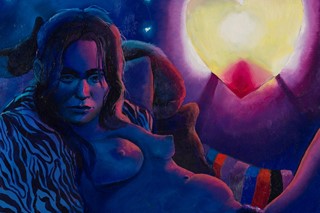 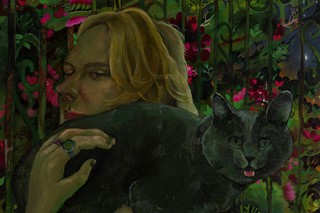 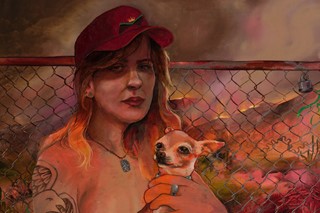 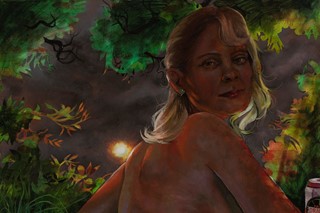 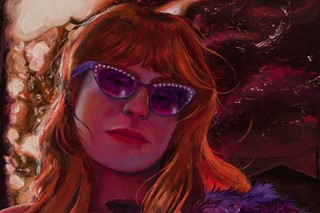 The descent towards the end of the world has rarely looked more beguiling than in Natalie Strait’s Monsoon Season. Lit by the eerie glow of a swimming pool at night or the otherworldly light of a full moon, her latest exhibition features a series of eight portraits depicting women luxuriating in these picturesque yet ever-so-slightly nightmarish environments. She tells us, “Monsoon Season is a show of semi-autobiographical paintings exploring being a young woman alive in western America when everything feels like it’s on a slow but neverending downward spiral and all you can do is just keep hanging out.”

Inspiration for the figures occupying Strait’s debut solo show (at Charles Moffett in New York), was drawn from vintage pornography discovered on Reddit and spreads from 1970s Playboys alongside the “unrelenting scroll of candid pictures of friends and selfies” on her phone. In a conversation over email, the Arizona-born artist explains: “I’m drawn to images that I find beautiful. Within that beauty though, I look for other factors at play – absurdity, humour, sexiness, power. Playboy has a lot of that. I don’t copy the images necessarily; the figures’ faces and many other parts of the painting are derived from my imagination or other random references, but that starting point informs the energy of the painting.”

In typical style, Strait infuses personal and popular culture references with both real and imagined details, recasting the figures in new locations, and introducing elements which strike the “precarious balance of the banal and fantastical” that characterises her work… a bright red nail polish, a soda can, the orange corner of a Cheetos bag.

The’s an underlying sense of menace pervading Monsoon Season. The “downward spiral” and its inexorable end-of-days conclusion are implied by the noxious polluted haze of a gorgeous cityscape and the menacing moonlit perfection of the poolside. “Superstition” and “Day Off” throb with apocalyptic heat. “Climate definitely plays a larger role in this series than in any of my earlier work,” Strait tells us. “I started making work about landscape in 2020, and the summer of that year was extremely bleak in Arizona. Everything was burning, the smoke was blowing over from other states, and we had record-breaking heat. I was barely painting, working odd jobs, and found myself thinking about the climate all the time; whether I was spending time seeking shade in the yard or just driving to my girlfriend’s house, I was constantly confronted with this extreme climate and couldn’t escape it.”

Yet, while there is an undercurrent of political, economical, and ecological doom present throughout this series (“How could there not be?” Strait points out), she insists that the main feelings permeating the mood of these paintings are the boredom and pleasure of doing nothing. She reiterates: “I don’t consider these works ‘climate change paintings’ per se; that hot, burning environment is present, but they are just as much explorations of the banality of everyday life, spending time doing nothing with friends, scrolling Instagram, and all the other fun yet boring things that occupy our time. Humour and mundanity are two important constants in my work.”

Throughout Monsoon Season, each woman meets the viewer’s gaze with intent. “I’m especially drawn to images where the models are looking straight at you and asserting themselves,” she says. “For example, the reference photo for the painting ‘I Stand in the Shadow of the Valley of Death’ is erotica from Reddit. The woman pictured has this amazing pose and a super direct gaze that is almost punishing you in a way that makes you aware of your own desire. It’s awesome.”

“The paintings are rooted in semi-self portraiture, so the way that they speak of womanhood is filtered through my personal experience. That said, there are gender politics at play. I think a lot of ‘the gaze’ and the relationship between subject and painter and I paint my figures to take up space. Part of that is formal – they take up the majority of the picture plane in most of these – and part of it is through the positioning and presentation of their bodies,” she continues. “I want to paint moments that are politicised, but also moments that are boring and relatable, grounded in reality in all its mundane glory. I’ve had friends tell me that my paintings have helped them feel more seen, heard, and at peace with themselves and it’s a magical thing to hear because it’s what I try to do. So I guess they speak of womanhood in a way that I’m a lesbian painting women for an audience of women.”