From secret sex parties to hip hop battles, Joseph M. Giordano’s We Used To Live At Night documents over two decades of the city’s lost nightlife in dramatic black and white

Inspired by the Brassai’s dramatic images of 1930s Parisian nightlife, the Baltimore-based photographer, Joseph M. Giordano, felt the desire to document his own hometown after dark. “Finding a copy of Paris de Nuit at a local bookshop while starting college in the mid-90s, I wanted to create a similar body of work for Baltimore,” he tells Dazed. “25 years later, I think I've come close.”

His extraordinary archive of images have now been collected together in We Used To Live At Night. With an introduction by Baltimore hip hop legend, DDM, Giordano’s striking, almost film-noir images memorialise the thriving world of the city at night. “Now, with COVID-19, the scene, as in other cities, is all but gone,” he says.

Below, take a look through some of the stunning photographs from We Used To Live At Night, selected by Joseph M. Giordano and accompanied by the photographer's recollections. 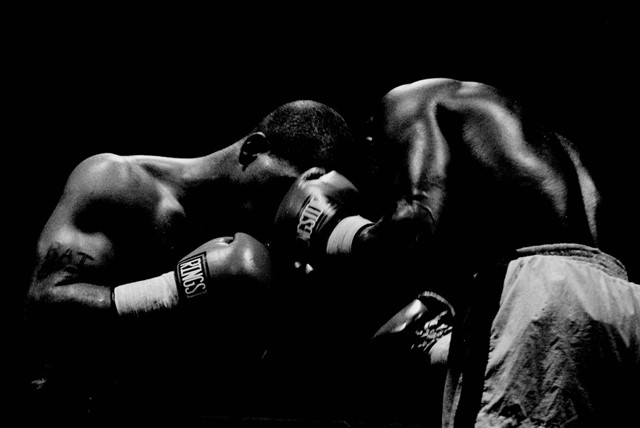 “Long before COVID-19, Baltimore had a thriving underground boxing scene. The amateur fights took place at old union halls, boxing clubs, and armouries. It was open to the public but mostly reserved for the die-hard fight fan. I followed the scene for a few years. It's going to be a long time before we watch indoor sports again. Most of the boxing work was shot on film – 3200 ISO, my favourite” – Joseph M. Giordano 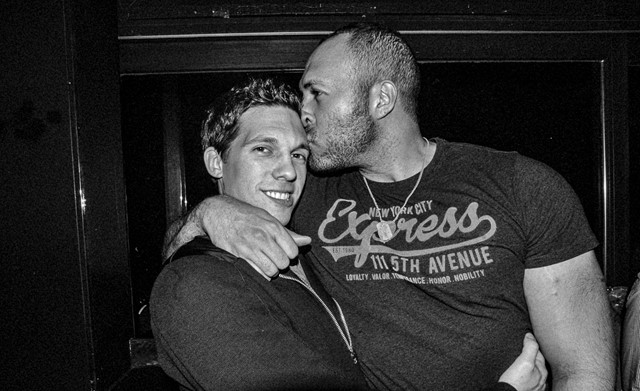 “This is a very special photo to me as it was taken during a monumental event. It was a special night as the state of Maryland passed Question 6 – the right for LGBTQA+ to legally marry. In 2012, President Obama was reelected (I was covering the election results from a right-wing bar in the city. The tears of defeat were marvellous) and the question of gay marriage was also on the ballot. We waited at Grand Central, the largest gay bar in the city at the time (it's now closed and demolished), for the results to come in. When the results were read aloud on TV, I snapped this photo” – Joseph M. Giordano 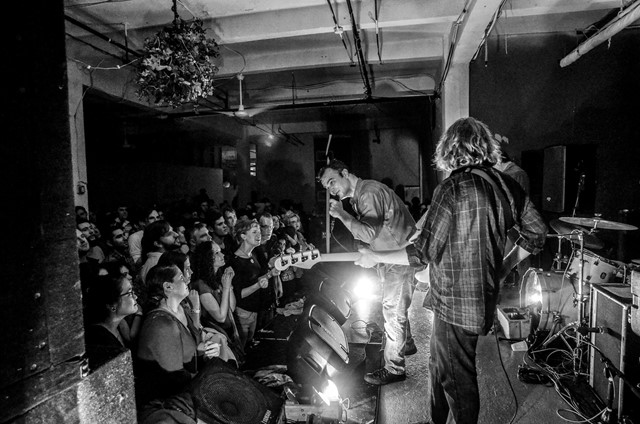 “Having partied in the UK several times, I always considered Baltimore a sister city to Manchester, one of my favourite cities in the world. Though I was a smidge too young to appreciate the ‘Madchester' scene, I always thought of Baltimore's mid-2000s akin to Manchester, with bands and musicians who would later rocket around the world. Future Islands was one of those bands along with Dan Deacon, Abdu Ali, Beach House, TT The Artist, and Rye Rye who would put Baltimore on the music map thanks mostly to the number of the city's underground venues where most of these acts sprang up. This shot was taken at an early Future Islands show at the H&H building, a five-storey apartment building that featured several music venues. This was a very special time that I don't think we'll see again for a generation or two” – Joseph M. Giordano 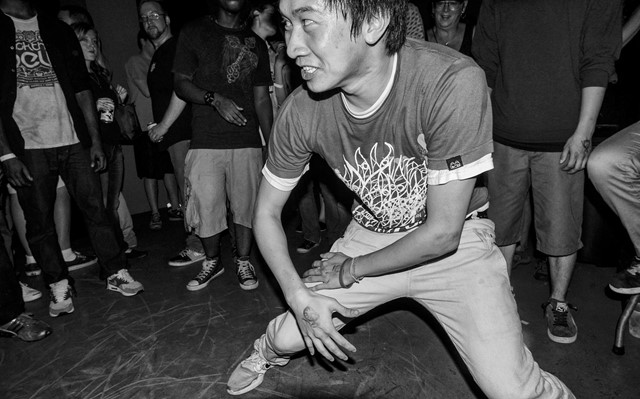 “One of the city's clubs, The Windup Space, used to host a party called ‘Four Hours of Funk’ hosted by DJ Exclaime and DJ Fleg. While the punters (I love that word) got down in the front of the house, the back of the house belonged to the breakdancers. Crews and those gutsy enough to participate would battle each other for applause and cred” – Joseph M. Giordano 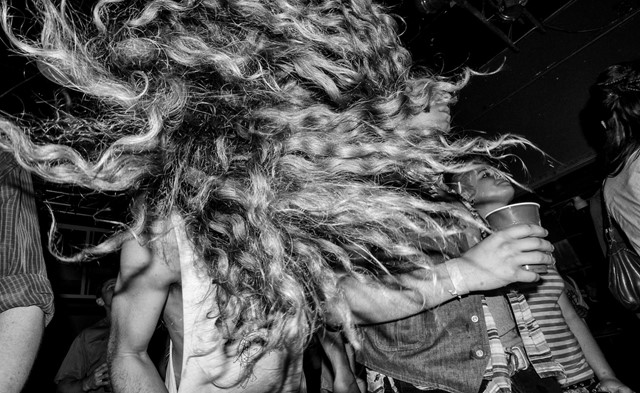 “The Baltimore scene loves a good music festival. We used to have a half-dozen every summer. This hair explosion was taken at Ratscape, held at the now-closed Hour Haus – an underground punk/metal/hardcore festival where a mere $15 could get you a weekend of music. Being a blue-collar city, Baltimore has always had a thriving metal scene, hosting Maryland Deathfest – one of the world's largest festivals dedicated to metal” – Joseph M. Giordano 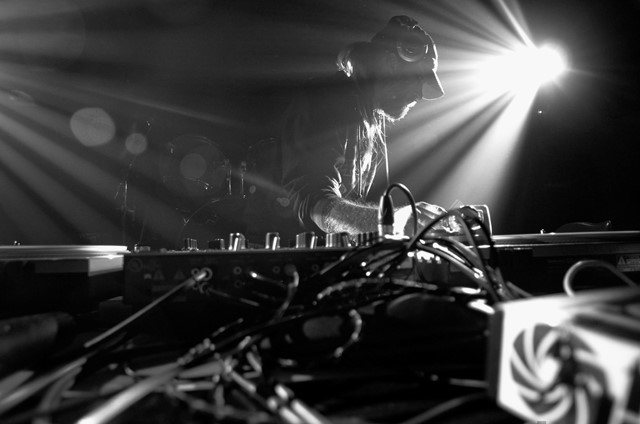 “I don't know if other cities had this incredible phenomenon, but in the late 2000s, Baltimore went through a ‘text only’ party phase. It worked like this – a DJ you knew would ask for your phone number. At 2 AM, you would get a text with an address. The address, most of the time, would lead you to an amazing party held in a warehouse, abandoned flat, or back-alley venue. It was a way to keep parties off social media and away from the eyes of the cops. The parties, it's no surprise, went on until about 6 AM. Some were so organised that the bartenders were set up to take credit cards” – Joseph M. Giordano 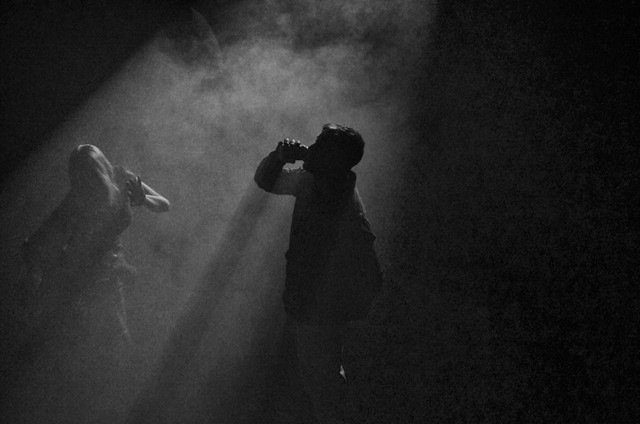 “Here's a performer and lone dancer at a ‘text only’ party” – Joseph M. Giordano 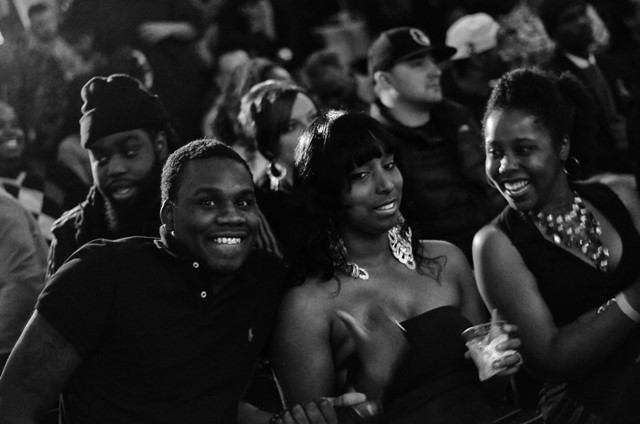 “For a few years in the early to mid-2000s, Baltimore's hip hop scene held The Crown awards. It was a local awards ceremony for the best artists in the city's rap community. I was shooting for Darkroom Productions, they contributed music to The Wire, and was invited to roll up. I came back a few years in a row to document the awards. I'm still humbled that I was ever invited” – Joseph M. Giordano 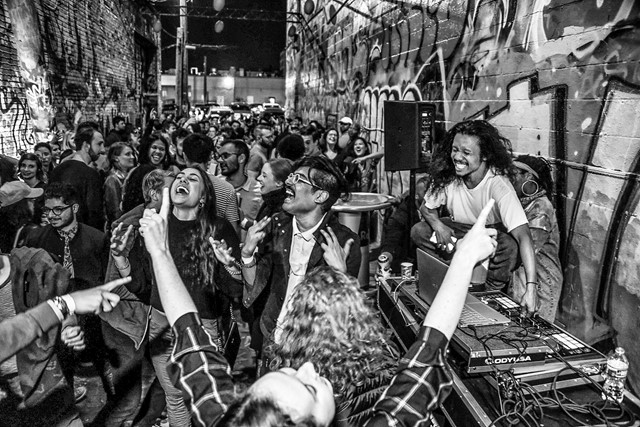 “This is one of my absolute favourite photographs of the series. Taken in on a hot April night 2019, the Asia North Festival’s underground night market featured numerous DJs including Ducky Dynamo and DJ Shawn Smallwood, seen in the photo. Held in Baltimore's Graffiti Alley – an L-shaped alley that's been the scene of numerous music videos and was the site of a Wild Style reunion with the original NY rappers and graf artists from the film, following the city's Asian Night Market food festival. The hands of the dancer in the foreground put the viewer squarely in the middle of the party. We will not see people packed into an alley and partying for a long time. Not legally, anyway” – Joseph M. Giordano 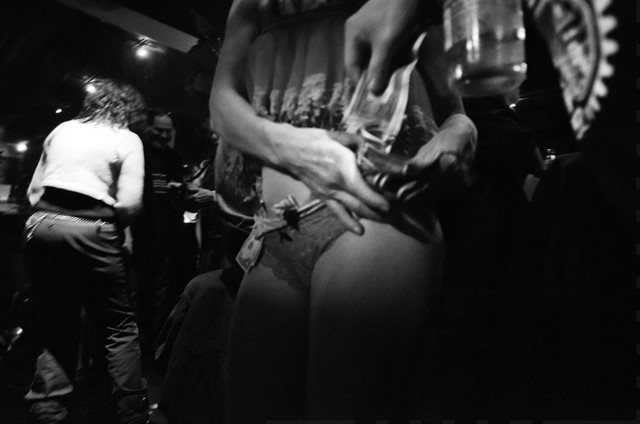 “Baltimore has a historical burlesque scene going back to the beginning of the 20th century, including Blaze Starr – the famous dancing queen who opened up the Two O'Clock Club in Baltimore's red-light district. The last burlesque club closed a few years ago. This was taken at a club along Route 40, an industrial highway peppered with cheap motels, liquor stores, and strip joints” – Joseph M. Giordano 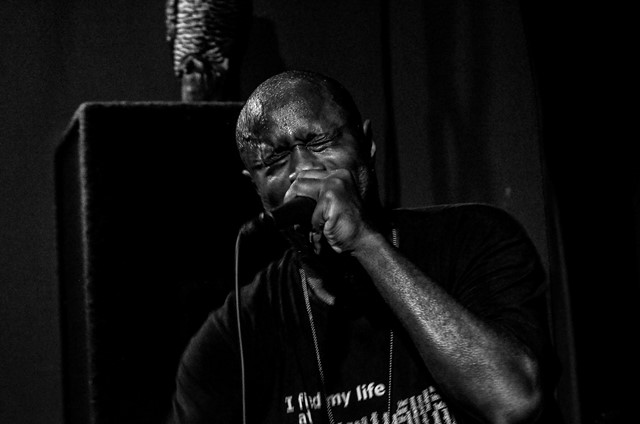 “Shodekeh Talifero is a Baltimore musician and beatboxing legend. He's played with symphony orchestras and studied with Tuvan throat singers. This is one of my favourite photos of him mid-performance” – Joseph M. Giordano 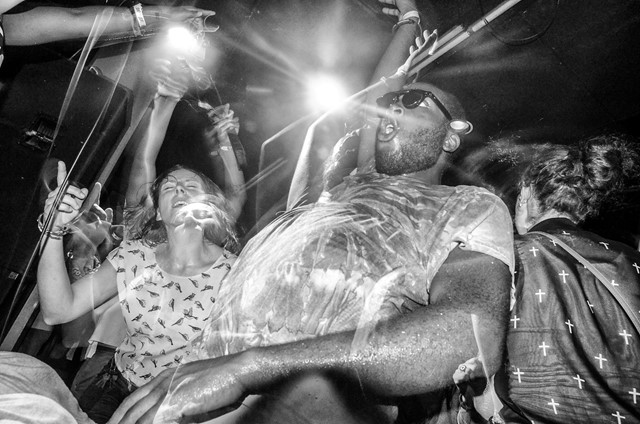 “I love this photo for the absolutely electrifying aspect of getting in the middle of a dance party and taking photos. I love this one so much and, like the rest of the world, and mourning the loss of the club scene” – Joseph M. Giordano 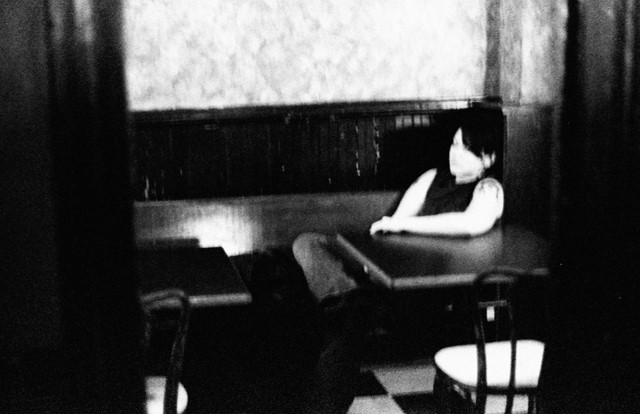 “One of my favourite photos from the series, this is the last call from a bar in Fells Point – a pub district in Baltimore in 1995. I shot this on 3200-speed film and on the fly. Now, to me, it's a metaphor for what we're all going through” – Joseph M. Giordano 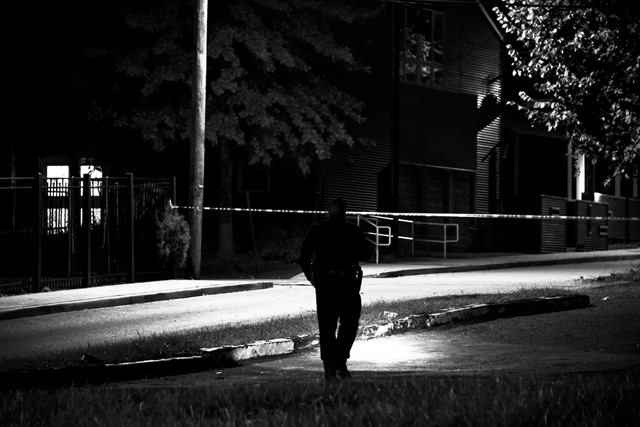 “This is the reality of Baltimore, or any American big city, outside the clubs and in the neighbourhoods. In the book, I've included crime scenes as a part of the night time fabric of the city which is real” –  Joseph M. Giordano 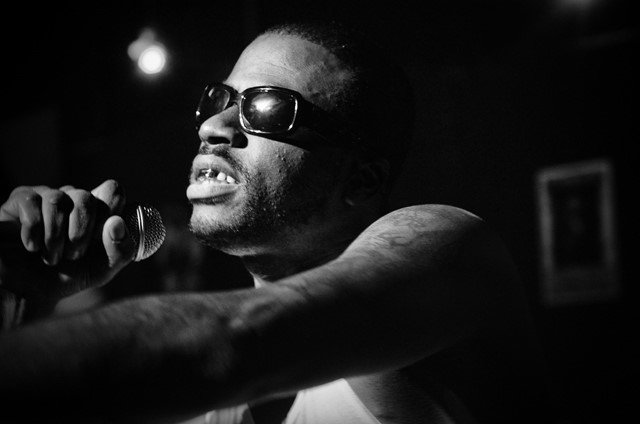 “Like the text-only parties, Baltimore also had a spate of open mic hip hop nights that sprang up in various venues like old boxing gyms. These were some of the most exciting nights I've had in the city. Seeing a flyer glued to a light post and finding the address in your phone and showing up. These were unique nights bubbling over with amazing talent” – Joseph M. Giordano 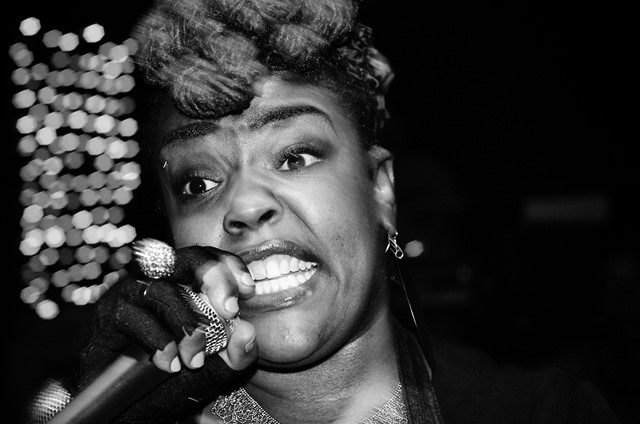 “Another shot from one of Baltimore's amazing hip hop nights” – Joseph M. Giordano 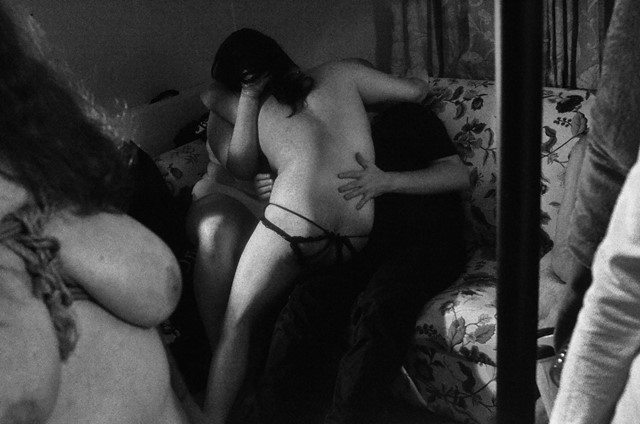 “Baltimore had a super-secret underground sex scene. It's part of the nightlife here. I was invited to a few parties to photograph. Participants had different bracelets on – red, no photos; yellow, photos but no faces; green, okay with consent. It was a great system. I was struck by how diverse and sex-positive these parties were” – Joseph M. Giordano 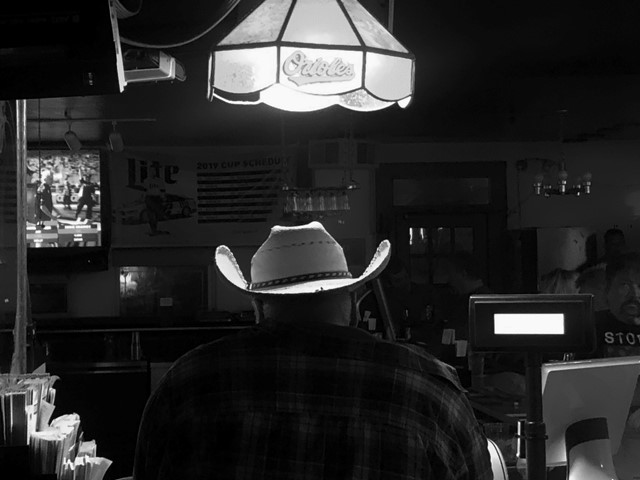 “2020 saw the closure of Baltimore's last Country and Western bar, Pop's Tavern in the steelworking neighbourhood of Dundalk. I had been visiting the bar for a few years prior and getting photos during the live music nights. I wanted to include it as, outside of more southern cities, live country and western bars are pretty rare. Pop's was over 50-years-old when it was sold. It's now a liquor store” – Joseph M. Giordano

We Used To Live At Night by Joseph M. Giordano is published by The Culture Crush and is available to pre-order here