The Victorian Punk pioneer was a regular on the New York club scene, and found cult acclaim by transforming her apartment into an ever-evolving installation, Living Environment 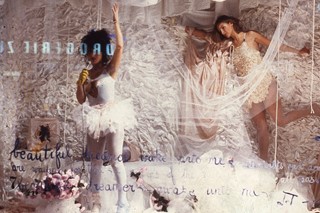 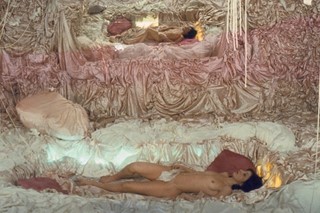 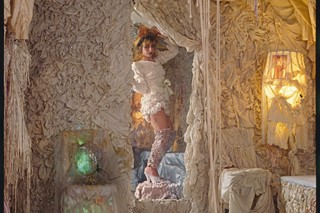 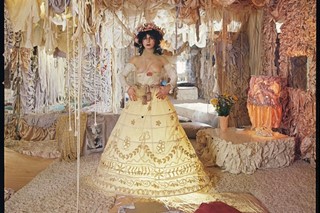 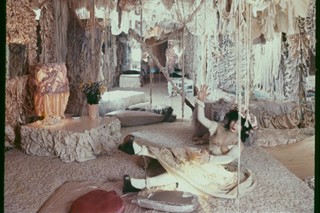 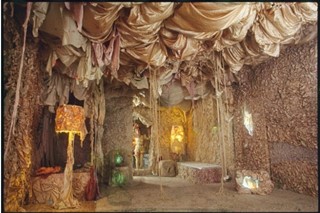 In 1978, the iconic New York artist Colette staged her own death at the Whitney Museum. Days later, she reemerged in a different guise: Justine, president of Colette is Dead, Co. and frontwoman for the Victorian Punks (a unique, feminine take on the “vibrant” punk scene of the time). Since then, she’s undergone a variety of other transformations, including Mata Hari, Countess Reichenbach, and the House of Olympia. In the wake of 9/11, she reinvented herself as Colette Lumière. Now, in another year of upheaval, Colette has decided it’s time for the birth of a new persona, Colette de la Victoire. In 2001 “we all needed light,” she tells Dazed, while in 2020: “We have to think of a good outcome, a victorious outcome.”

Regardless of her name, Colette has always been in a category of her own. Her art defies traditional labels, bringing together painting, fashion, music, photography, and a kind of theatre. She’s collaborated with Fiorucci on a clothing line and, as Justine, released a limited-edition LP, Beautiful Dreamer, though she says her intentions were never commercial: “I just wanted to prove I could do it.”

Where the seemingly disparate elements of her work really come together, though, are her “inner sculptures” – dreamlike multimedia installations that have seen her transform storefronts, galleries, and her own NYC apartment with pastel-coloured silk and “Colette-ised” furniture. Colette herself has often lived and performed inside them: “reclining, sleeping most of the time.”

With the birth of her new persona, Colette’s studio – formerly Laboratoire Lumière – has also been renamed “Victory of the People”. It’s first mission, according to a dedicated Kickstarter, is to help save and conserve one of the artist’s early inner sculptures: “Living Environment” (1972-83). Over a decade, the baroque installation enveloped her Lower Manhattan loft, constantly evolving with the addition of new paintings, light boxes, mirrors, and other artefacts. Inhabiting it, she herself became a “living sculpture”.

For Colette, it’s important to preserve “Living Environment” because it marks “the beginning of an artist’s career”. After plans for it to be acquired by Stockholm’s Museum of Modern Art – led by the famed art dealer and gallerist Leo Castelli – fell through in 1982, the work has been in storage, where it’s “been through hell”.

“Since 1983 I’ve been carrying this thing like Atlas on my back, and it’s falling apart,” Colette says. Becoming exasperated, she’d already begun destroying some of her larger works when friends and supporters stepped in to set up the crowdfunding campaign.

It’s no surprise that Colette objects to being tied down by past artworks, either. As in her art, she’s had little time for traditional boundaries in her life. “I was a Downtown girl most of my life but I don’t like to be stuck to one group, or one title,” she says. “I like to be open to different people and different views.” In the 1970s and 80s, she was a regular at NYC’s Mudd Club, a staple of the city’s punk crowd, while at Studio 54 she mixed with “a whole other scene”, rubbing shoulders with the likes of Andy Warhol and Halston.

Early in her career, there was also the issue of acceptance in a male-dominated art scene. Colette first became friendly with a group of American conceptual artists after showing in the same gallery. “I was the only woman, as far as I remember, at the time, and I was probably the youngest as well,” she recalls. She later came to feel more accepted among a group of younger artists, then relatively unknown, including Jeff Koons and Richard Prince.

Both Koons and Prince would go on to feature in the film Justine and the Boys, set in Colette’s “Living Environment”. Filmed by the photographer Robert Polidori, the film sees the artist take a bath in a corset and feather boa, soundtracked by off-key disco music, before her husband (played by Prince) arrives home to find her sprawled on the floor with several men.

Colette’s kitschy, ever-changing aesthetic has been cited as an influence on Koons, alongside Cindy Sherman, Madonna, and more. It’s also been ubiquitous in pop culture, cropping up everywhere from fashion shoots to shop window displays. Her rebellious street art, meanwhile, prefigured the success of Keith Haring: artworks such as 1973’s “The Ear” were painted in the middle of public spaces across NYC, frequently leading to the arrests of her and her collaborators.

This legacy is what the Victory of the People Kickstarter, which has already raised around a third of its $15,000 goal, aims to secure. Rewards for donations include signed prints, artworks, and a screening link for Justine and the Boys. With the money raised, Colette’s so-called “angels” aim to restore the “Living Environment” and, ideally, find it a permanent home in a gallery.

That doesn’t come without its own difficulties, however. For one, Colette would necessarily be absent from a permanent public installation – how would that affect the impact of the artwork? “That’s a very good question,” she says, noting that she and Castelli always felt very strongly that: “there needs to be a Colette in there.” In the past, she’s used a bespoke Colette mannequin to replace her real-life presence, but adds: “Even better, if I could find a way to do it, would be a wax figure, because it would look even more real.”

Then there’s also the problem of placing too much emphasis on the past. Predictably, given the arc of her career, Colette “doesn’t believe in reenactment” – she hasn’t stopped evolving yet. In 2016, she was asked to resurrect an artwork titled “David’s Wraith” (styled after David’s “Death of Marat”) for a 40th anniversary show in the attic of MoMA’s PS1. She explains that she only agreed to feature in the show on the condition that she didn’t have to repeat herself. Instead, she debuted a new installation, titled “There’s A Mermaid in the Closet”, filling an attic with her old paintings, sculptures, and archival pieces from her wardrobe.

Nevertheless, she suggests that a work like “Living Environment” has a timeless quality that makes it worth revisiting. One of the primary aims behind the artwork, she explains: “is to transport the viewer into another dimension, put them into a higher state.” And, while the hedonistic days of 1970s New York are long gone, this remains as relevant as ever in 2020. “I think we’re in a transition,” she adds, but she’s hopeful for what comes next. “I think it’s an ugly birth, but it can be a beautiful outcome, and that’s what I’m counting on. We need as many people as possible to have that vision, and not go mad, and be stuck in fear.”

“I think what we need is art that elevates the spirit.”

Check out and contribute to Colette’s Kickstarter campaign here