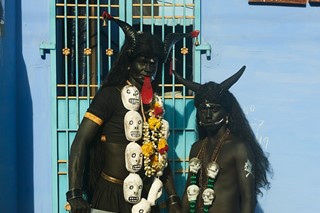 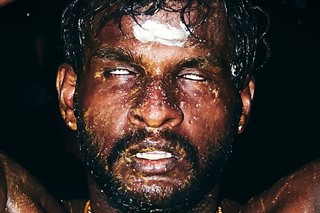 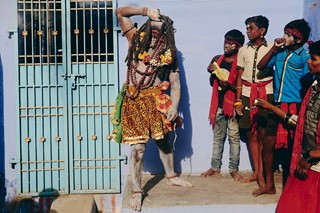 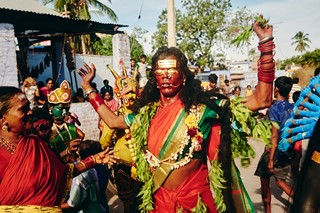 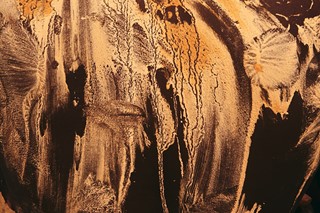 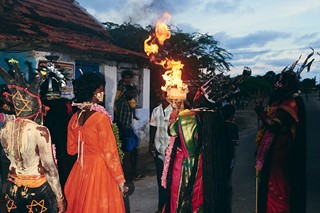 The scope and pace of change in the 21st century continue to transform – for better and worse – the world as we know it. All over the planet, ever-expanding city limits are encroaching on local culture and communities. But modernity doesn’t touch everywhere evenly, and it’s still possible to find enclaves that have eluded the terrible homogenising effect of globalisation.

A Delhi-based fashion photographer, Nishanth, has begun capturing the disappearing traditions – endangered as a consequence of the modernising agenda of capitalism – that remain unique to Indian culture. “It was going back to my roots,” he says. “I was raised in a city rapidly developing because of globalisation. Just a few hundred kilometres on either side of the city are places that were less affected by globalisation and hence still retain most of their culture and tradition. I wanted to learn and archive my tradition and culture before the boundaries are erased.”

A Gentle Reminder depicts the religious festival of Dussehra – an annual celebration of the triumph of good over evil. “Usually it’s the culmination of the festival, on the tenth day. It’s celebrated with much fervour across India and parts of other South Asian countries which believe in and practice Hinduism,” explains Nishanth. “According to Hindu beliefs and the Ramayana traditions, Dussehra is the day when Lord Rama vanquished Lanka king, Ravana, who had kidnapped his wife, Sita. The festival is celebrated as a symbol of victory of gods, or “devas”, against demons, or “asuras”. Effigies of Ravana are burnt with gusto in public and private spaces, not just necessarily temples.”

There's an elaborate quality to Hinduism that's reflected in the involved and painstaking care and preparation that a festival such as Dussehra seems to demand. “Hindus believe that there are 330 million gods or deities,” Nishanth elaborates. “Often rituals and worship of one necessarily involve rituals and worship of a few others; for in all Hindu worship centres or temples, all the relevant deities are placed in their hierarchical importance in the Hindu pantheon. It is against this background that the Dussehra festival has to be understood.”

It’s one of the many traditions that have survived more in the rural parts of India than the cities, where the faster pace of life and the lack of space make such elaborate celebrations more difficult to enact. This distinction is especially visible in terms of the Indian youth. “In the countryside, there’s more leisure time due to unemployment and under-employment”, believes Nishanth, whereas in the cities, “employed urban youth, who are often migrants from rural areas, do not find the time.” The conditions of city-life make the practicalities of such elaborate festivals problematic to stage. The photographer explained, “Many other festivals, such as Draupathi, have virtually disappeared in many places, particularly in urban areas. It’s expensive and performed at night, and urban areas cannot afford to provide the much-needed space for the drama and its spectators.”

There’s a strong theatrical element to Dussehra, and Nishanth’s practice as a fashion photographer has informed the way he’s captured this aspect of the festivities. A Gentle Reminder shows all the intricate details and sumptuously vivid pigments of these imaginative costumes. “I’m constantly looking for people with an interesting, unique or even a weird sense of style,” he says.

But, crucially, the importance of continuing to stage festivals such as Dussehra isn't just about preserving a sense of the past. Nishanth's images really show how progressive and unifying and these traditions could be. The celebrations are not only elaborate and highly-involved, but they’re intergenerational and bring everyone in the community together. Nishanth also sees the potential role these rituals could play in terms of allowing the transgender community to become more accepted. “Till recently, say, about two decades ago, the transgender community was looked down upon with stigma,” the photographer says. “Festivals like Dussehra, in which they are encouraged to participate, make them more visible and give them a sense of importance and identity.”