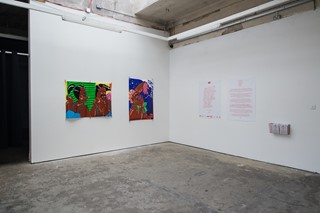 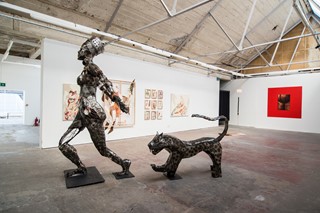 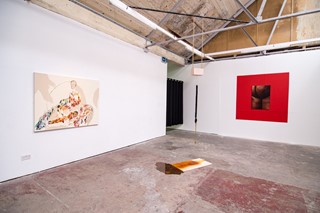 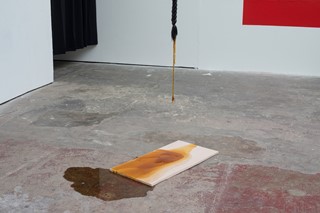 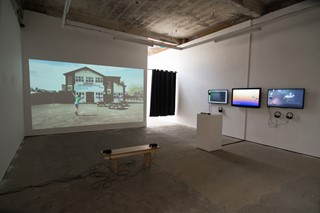 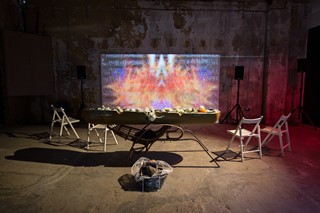 It is a rare thing to enter into a gallery, as a Black, Queer person, and find echoes of yourself on the white walls. To find commonality with a work of art is one thing, to see yourself reflected back is something else entirely. Now in its second year, the BBZ BLK BK: Alternative Graduate Show does exactly that. Launched in 2018, the annual exhibition acts as a platform to showcase the work of Queer Womxn, Trans and Non-Binary artists of Black Ancestry. This year’s edition, which runs until August 31 at Copeland Gallery, invites Deborah Joyce Holman to co-curate alongside BBZ. Ten artists have been selected with works spanning painting, sculpture, photography, video, and performance. The works are loosely themed around community care and self-realisation, with an overriding exploration of how to communicate an identity that is misconstrued within a wider culture.

In the first room, Ebun Sopido’s “in the thick of it” (2019) transforms an entire wall with textual invitations into a poetic body of work. Fragmentary sentences sit alongside each other, piecing together a wider consideration of the self, in which the physical body is absent – an opening moment that holds and honours kindred readers. Directly opposite, Linda Nwachukwu’s strikingly bold and colourful self-portraits “TIO” (2019) and “EH!” (2019) use figurative representation to draw inspiration from anime and cartoons. Utilising satire, the viewer is invited into an exaggerated world in which the artist’s alter ego takes centre stage and unapologetically fills the canvas.

Miranda Forrester’s abstract nudes continue the show’s investigation into and play around figuration, revising the historical and often white cis male-centred gaze on this figure through a Black, Queer perspective. Forrester’s nudes expand outwards across a transparent canvas, on to the walls behind, activating her paintings with movement. Abstraction is also distinct in Kengy’s work “Heal and Adorn (3)”, a copper print that renders a close-up photographic portrait as painterly. Crowned within a red painted frame, Kengy’s portrait glows different shades of gold depending on where you stand in relation to it.

The body is abstracted once again within Davinia-Ann Robinson’s performative sculpture “Plasticised Sensation” (2019) in which a long hair braid hangs from a chain and plaster sculpture, containing wood varnish. Throughout the duration of the show, the sculpture will be topped up with varnish, which drips down the braid, leaving moulds and puddles of solid mass on the gallery floor. This spilling out and over into the room emits a physical manifestation of a taking up of space, one that is reiterated in Favour J’s magnificent steel and copper figures “Divinity” and “Ododo” (2018). Towering high over her audience Divinity stands in motion with her hands held back, as if caught mid-run, or seconds before launching into flight. Welded from layers of metal plates, with intricate details and patterns deriving from the Benin Kingdom, many symbolic of the womxn who have come before her, Divinity is accompanied by a loyal leopard companion Ododo: protector of the spirit of these womxn.

The multiple frescoes of Enorê’s “efface replace repeat” (2019) combine elements of painting, sculpture, installation and AI technology. Enorê uses a school portrait as a repeated motif to explore the power dynamics produced through religious iconography. With frescoes distributed at different heights and a sensory camera that uses live data to modulate the images’ intensity and fade, Enorê situates the viewer in the role of archaeologist searching for traces of past lives. In doing so, the works initiate a conversation around the legacy of representation and how present moments will be perceived by future generations.

At its heart, BBZ BLK BK holds a place for those who have traditionally been written out of and erased from history. Danielle Brathwaite-Shirley’s sculptural and video works let the viewer into an adjacent room that was “made for Black Trans bodies”. Through a multimedia installation, with repurposed “humanoid” sculptures, an ephemeral soundscape and VR animation, the viewer is transported into a space in which the erasure and presence of trans people are placed in a slippery dialogue. The central animation is a video game in which the audience is positioned in a user/player narrative. Gaming provides an imaginative landscape for Brathwaite-Shirley to build a world entirely of her own making. This world does not resolve the conflicts of living as a Black Trans person, but instead evokes the power of imagining in a sphere which routinely writes out the existence of Trans people altogether.

If gaming is an arena that scarcely recognises Black, Queer bodies, coding as a whole exists in the same vein, often failing to be representative of, or made by, people of black ancestry. Kumbirai Makumbe’s three-part video series, including an interactive work, deals with this absence by documenting the construction of a computer-generated self, by Makumbe. Voiced using a text-to-speech avatar, the self-conscious narrative guides the viewer through issues around how Blackness exists within digitally generated matter. It is self-awareness which is mirrored in Rene Matic’s “Brown Girl in the Art World III” (2019), in which a video of Matic dancing collides with a voiceover of the artist critiquing her own work. This transparency not only draws attention to the creative intention behind the piece but also provides a useful interrogation of the weight of identity that Black, Queer artists are often expected to navigate through their work.

Matic consciously questions why she cannot simply look at her work through the perspective of a white artist, with concerns of form taking precedence over context. In doing so, Matic provides a key takeaway from the show itself; will Black Queer artists ever be alleviated from the pressure of confronting their identity in their work, and be allowed to make art for art’s sake? Then again, while so many of us fail to see our identities reflected in the cultural landscape around us, so much can be gained from artists who have the bravery to be self-reflective in considering what it means to take up space and to survive. BBZ BLK BK takes survival and envisions a celebratory platform where these works can rightfully be appreciated in joy, light, and abundance.