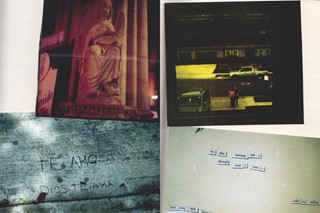 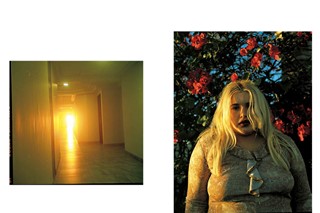 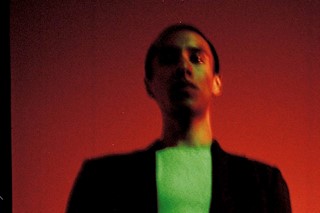 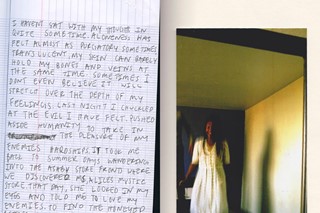 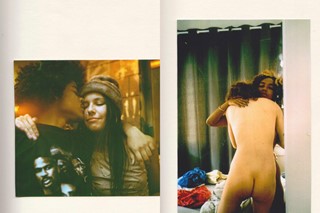 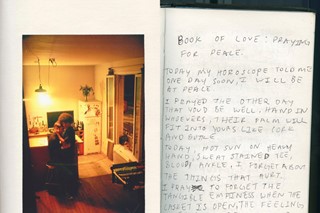 The devil works hard but Jheyda McGarrell works harder – this is not only the title of the photographer Jheyda McGarrell’s new zine, but also a representative statement about the labour they’ve been putting in fighting racism, sexism, and the patriarchy through their creative endeavours.

The Art Hoe Collective curator and current Dazed100-er is known to champion the black, Mexican, and queer experience through their photography and film – and hosted their first solo show curated by Sage Adams last year. Now, the New York-based creative has let all their pent up thoughts and feelings out in the pages of their new zine.

Thinking about the fleeting moments we experience within our lifetime, McGarrell finds catharsis by turning personal experiences into art, and hopes their openness will encourage others to become more comfortable in expressing themselves.

Below, Jheyda McGarrell speaks with Dazed's Arts and Culture Editor Ashleigh Kane about the making of this extremely personal project.

“Through (the zine), I guess, I was just trying to do my part in reclaiming the emotional vulnerability that black women haven’t been historically, and even now, allowed to have” – Jheyda McGarrell

This zine feels extremely personal, even more so than past works. You wrote in your letter to me: “I am trying my hardest to be honest about the pain and love I’ve felt”. Can you tell us about what you are channelling through its pages?

Jheyda McGarrell: This zine was super casual for me to make. I just had so many pent up thoughts and feelings that felt like they needed to be spoken out loud so they could be truly acknowledged. I’ve been living, breathing, and trying to heal. The last time we talked about my thoughts, I was thinking about being of colour and being able to truly experience peace. Now I’ve been thinking about how to actually get there, how to get to the sweet spots of our mental states and existences, and indulge in them. I think to get there we have to dig out the layers of rot that our repressed emotions turn into and feel the uncomfortableness of the rawness. Through this, I guess, I was just trying to do my part in reclaiming the emotional vulnerability that black women haven’t been historically, and even now, allowed to have.

Aside from yourself, who have you included in the images and why?

Jheyda McGarrell: The photos of others are of friends and family. I chose these images directly because they all individually brought me a sense of nostalgia, regardless of the images having been recent. I wanted to include faceless photos of me with others because I am extremely interested in the concept of decolonising intimacy and infinite love. Or that one has the potential to create endless amounts of love and care, despite the Roman Christian enforcement of monogamy, which in my belief has created a culture of toxic love, full of jealousy, faux ownership, and lacking in true freedom. I wanted to speak on the fact that in my images, spending time with me, etc, could be anybody – their gender, sexuality, and relation to me unknown and unimportant, because the sentiment of the beauty observed is the same.

In your letter to me, you say you’ve been thinking about time passing. You also spoke about your generation shifting through these spaces and times, and how that has inspired you. Can you share more about that?

Jheyda McGarrell: I forget exactly what I wrote to you, but I remember the feelings surrounding me were all rooted in thoughts of fleeting time and doomsday. The ideas that stay locked in my brain: that we don’t have a future on this Earth, that we’re living in this time period of almost all-consuming hopelessness due to continued societal repression, that people view true connection as rare and far in between, that we’re losing so much love for each other and life. I have come to hate wasted time – even rest and peace, I want to do with intention and awareness. My generation is the one who started off in an entirely different landscape in terms of styles of communication, technology, government, etc.

Around the time I was born, California had just come out of the racial tensions surrounding Rodney King, OJ Simpson, among other events that occurred on a national/worldwide basis. These events moved us into a time period of renewed hope for the future, as enforced through artistry and a changing culture, but not without an affected consciousness and distorted relation to time. We were born at the end of a century, not a part of this time, not a part of that time, born hopeful but lost. Born analogue – technology grew up around us, not with us. So in my letter, I was just addressing how I personally am taking a part of this position between life cycles, and how others and my own struggles with this existence, has inspired where I’d like to take my work.

“Even though it makes me anxious sometimes, my art is my way of seeing the beauty in the world and I want to share that with others” – Jheyda McGarrell

Do you find it a need to purge thoughts and feelings onto pages and through film? Is it easy for you to be so personal and open? Is it catharsis?

Jheyda McGarrell: I definitely feel it necessary to interpret my experiences and reactions to them this way. Catharsis is 100 per cent the correct word for the feeling it gives me. I’m really comfortable with myself, open, and talkative in my personal life, and find being that way makes people comfortable expressing themselves and their personal truths. I want so badly to use my art to push this comfort so that maybe if I allow myself to talk about myself like this, others will feel more at ease doing it. I don’t know if it’s necessarily easy because sometimes it makes for an extremely difficult time, separating reactions to my work versus reactions to me as a person since they are so intertwined. Even though it makes me anxious sometimes, my art is my way of seeing the beauty in the world and I want to share that with others so really there’s nothing I can do but face my fears each time I do or make something.

Can you tell us about the writings included? These feel like poems, thoughts, diary entries. How do they add to the narrative and flow with the imagery included?

Jheyda McGarrell: The writing included in this zine is all of the above. It is all about moments and expressing the importance and intensity of the feelings embedded into instances. I included them because they felt like feelings that so many people have, yet are too afraid to say or show because they’re worried about how they may be received by others. I believe in my truth and am sure of my insanity, I live so others might find comfort in their truth. This whole zine is, most simply put, another portion of my becoming. The portion used to manifest an unashamed sense of self through exposing portions of my artistry I had once kept to myself and emotions that photography alone can’t express.

Lastly, could you talk about the title: The devil works hard but Jheyda McGarrell works harder? How does it tie into themes presented within the zine?

Jheyda McGarrell: This title took form through feelings during a time period where I reached a point of accepting comfort and coming into a space where I was proud of how much I persevered through, but still felt like death and evil were chasing after me. My uncle passed away in August and my father told me that he had an aneurysm and had fallen in the shower, so when they found him he was bleeding from the mouth and eyes. My father is Caribbean, so he’s kind of reserved with his emotions, but this day I saw true ache on his face, and by my nature, I absorbed all of this ache. This time was supposed to be happy – I was starting my senior year of BFA, finishing my thesis, just had my first solo exhibition, whatever. But this gory image, of my uncle’s death, so biblical and surreal, stayed locked in my mind. My insomnia worsened and it reminded me of when I was younger living in Mexico for a few months with my Abuela. I woke up one night to, what I recognised as, the devil’s face – red eyes glaring at me through pitch blackness and everything. I found my internal landscape was a wreck with all these different sadnesses, but on the outside, I was still prospering and trying to live my best life because that’s what evil doesn’t want, for us to enjoy happiness and love, despite the cyclic presence of extreme hardship. So one day, I was laughing about struggles with a friend, I said through laughs, “God damn. The devil works hard but me? I, Jheyda McGarrell, work harder.” I haven’t forgotten the exact words because I wrote a paraphrased version in my notebook and that became the cover.