With a collaborative film showing in London, the artists speak about why the end of the world could be a good thing for everybody but rich men 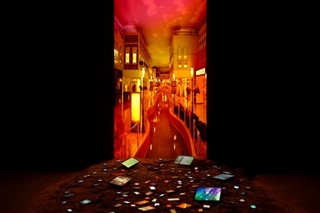 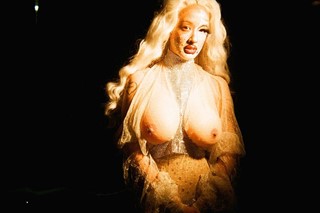 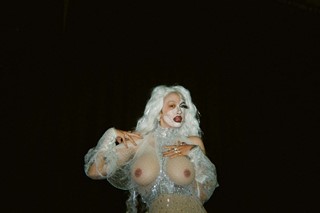 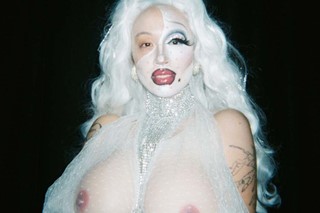 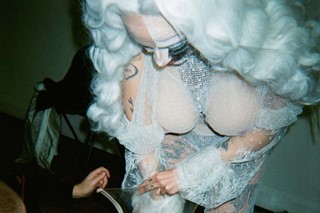 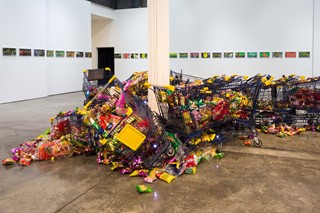 Unearthing the origins of the world is a daunting task. Throughout the centuries, countless narratives have sought to dig up the distant past, hoping for answers to the impenetrable enigma of human existence. Whether sacred or profane, creation myths have been overwhelmingly dominated by rigid binaries and the strong patriarchal ethos informing politics and society at large.

Imagining an alternative to this binary way of viewing the world and its inception was what drove filmmaker Sophia Al-Maria to first reach out to writer and performer Victoria Sin – an encounter resulting in instant chemistry, both creatively and personally.

Neither future nor past was left uncharted by the duo’s gaze. The first film displayed in the gallery’s space sees a woman of the Wayuu tribe, in northern Colombia, give an ancestral account of the power of feminine rage through the story of Wolunca – the first Wayuu woman, who had a ‘vagina dentata’. In the second room of the space, separated by a sheer, membrane-like curtain, is the second film directed by Al-Maria. Made in collaboration with Canadian-born Sin – who wrote and performed the visually striking piece – the film is a futuristic, science-fiction inspired creation myth interrogating the patriarchal dimensions of race, sex, gender, and fertility. “How many stars? How many worlds? How many ways of being alive?” asks Sin halfway through the film. With the show open now, we ask the creative duo to tell us more about their take on speculative fiction, post-apocalyptic worlds, and highly underrated aesthetic relevance of tacky sci-fi B-movies.

“With the end of the world comes a lot of space and possibility. I like exploring the idea of how we would recreate ourselves from scratch” – Victoria Sin

How did you first come across each other?

Sophia Al-Maria: I first saw Victoria from afar, before we met, as I had started to gather up ideas about what I wanted to do for this writing residency. I remember seeing Victoria as this sort of apparition at a very important moment for me. So I just contacted them, out of the blue, and asked if they would be interested in gracing these events I had in mind with their presence – like a sort of deity that was visiting from some other planet. That’s how it all began. Then, Victoria invited me to this reading group…

Victoria Sin: Yes. The reading group was part of a project that I’d thought of based around speculative science fiction and the importance and value of it in a lot of intersectional practices, especially for queer people and queer people of colour. We discussed works by people like Ursula Le Guin, and yeah, Sophia and I really bonded over our mutual love for this. Over time, it developed into the film you see in Whitechapel.

Sophia, you reached out to Victoria asking them to write a creation myth. When and how did the interest in creation myths first come about for the two of you?

Sophia Al-Maria: Creation myths are usually hyper-gendered and very binary in their understanding of the beginnings of the world. So, one of the things I was really curious about was what would happen if you tried to break beyond those binaries. Working with Victoria has been exciting also because they’re an incredible writer and performer, so that was where the idea of writing our own myth came from.

Victoria Sin: In all our work together, the idea of science fiction was very important. For the past years, I’ve been thinking about the narratives that surround us every day and how these narratives are deeply entrenched in our psyche. I’m interested in how we create these narratives about ourselves, including about gender and race, the ways in which we think about being human, what we can or can’t do. I did this thing that a lot of sci-fi writers do when Sophia asked me to write a creation myth: it was to think about how the world would start after an apocalypse, like a blank slate. This has been done a lot in literature, for example, in a book which is referenced in the film; Octavia Butler’s Parable of the Sower. It deals with a young black woman who starts a new religion in this post-apocalyptic America which looks scarily similar to how things are currently going. In the opening chapter of the book, a new president has taken over and his slogan is ‘Make America Great Again’. It’s quite spooky.

Apocalyptic scenarios are often depicted as tragic in male-driven science-fiction, but from an intersectional perspective, could there be a positive twist on it?

Sophia Al-Maria: It reminds me of this one line; ‘The apocalypse is just the rich man’s word for apocalypse. The dominant paradigm’s word for revolution.’

I don’t use the metaphor of  ‘apocalypse’ as a negative thing. It’s obviously a negative thing for the people who have power or who have something to lose. But for those who have nothing to lose, letting go, and dissolving essentially into the crowd or into molecules, is actually liberation. These death/rebirth cycles are part of our ancient ancestral stories. That was the natural order of things; the destruction, the death always preceding the birth.

Victoria Sin: I agree. With the end of the world comes with a lot of space and possibility. I like exploring the idea of how we would recreate ourselves from scratch. Would we even be humans? Would we just be dissolved bacteria and molecules?

The film you did together has a strong visual ethos. Victoria, you’re in drag, performing a monologue in a saturated outer space. What were you visual influences in the making of the two films?

Sophia Al-Maria: Well, I have very bad taste in movies, for sure. I like kitsch, neon, lurid colours. I’ll eat any garbage. That, and Barbarella!

Victoria Sin: Sci-fi B-movies and 90s body horror were a big visual influence, I think. When Sophia told me she wanted to film me in space while in drag, I instantly said ‘YES!’.

What do you hope this body of work conveys to the audience?

Victoria Sin: I hope that the work shows a different way of how things could be, and take people out of their lifestyle for a minute. I hope it puts people in a fantasy realm for a while so that when they back to their normal lives, they can look at it a bit differently. The best thing that I can hope this work does is to show people that we live in a multiplicity of narratives that often contradict each other. Things are incredibly complex rather than binary, and it’s important to seek out to understand this complexity.

Sophia Al-Maria: I agree with that. The key in this particular body of work is creating an island of some kind, a sort of hinterland for people to access. It feels familiar, it operates inside of the structure of these kinds of myths that we’ve all heard before, and yet it’s also disjointed and disturbing the usual parts of these narratives.