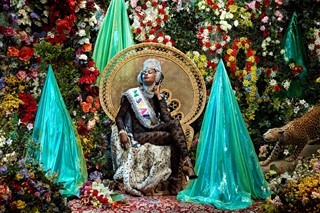 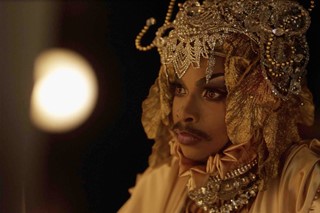 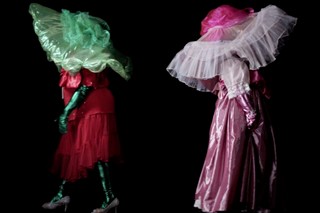 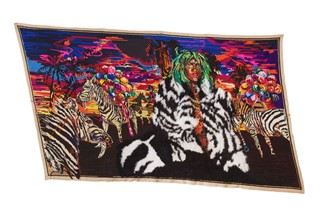 Athi-Patra Ruga is tired of the social and political state of the world – and who can blame him? Far-right leaders are being elected, individuals are facing persecution for their sexual orientation, and Brexit seems to be happening. Our reality as we know it is an ugly and frightening place, and it’s easy to be swallowed up in the grey whirlwind of it all.

Through his art, Ruga decided to depart from this harsh reality and create his own, better universe. By using film, sculpture, set design, photography and performance art, the multidisciplinary artist crafts his version of a utopia titled Azania. The aim of his work is to provoke discussion and criticism about leaders, which he calls gods, and their rainbows, which are their political promises. And although Azania is gaudy and bright on the surface, Ruga’s work has a darker undertone, as it questions the possibility of whether utopia is truly possible.

While tapping into his own cultural context as a black queer artist from post-apartheid Cape Town, Ruga juxtaposes lavish surfaces with the hostility of our real world. We sat down with the artist to discuss how he’s the master of his own universe, and what audiences should expect at his ongoing exhibition at Somerset House in London.

How would you describe your art?

Athi-Patra Ruga: It’s always in flux. What I want to do is to tell better stories about the community I come from, or the urban mythologies from the community I come from. I’m trying to find out about the world’s gods, leader, their promises – which I call “rainbows” – and omissions in that journey as a black performance artist. I’m also trying to find a nationalistic rainbow or an arc somewhere, where I comment on post-liberation societies. But, of course, my story is of a post-genocidal South Africa.

I was born in the last years of apartheid, and I’d always grown up with promises of a better tomorrow or of a better world.

Is that why you created your own utopia, Azania?

Athi-Patra Ruga: I was looking for a better world. This came in the word “Azania” which alternatively in Hebrew means “God is listening”. But also "Azania" was a word used in apartheid, and during the liberation struggle, to basically denote a world that we are all creating, or rather our parents are creating and that I am challenging and enjoying.

That comes with being a contradiction too – because it becomes a utopia, and utopias need borders. They need border controls in the form of a visa, they need armies to guard (themselves) from the boogie man that’s coming, whether it’s a Mexican or whether it’s a Zimbabwean in the case of South Africa.

Until recently, when I think of utopia, I think of a future utopia. One that we have the power to create, not that we actually commiserate over. With that creation of the future, I then speak about today and what I would like to change today for my community.

What would you like to change for your community?

You juxtapose aesthetically beautiful materials, like the glitter and crystals, with controversial philosophies. Why?

Athi-Patra Ruga: I do it to disarm people. I know that I charm and that I console. That happens with many tools from glitter to Swarovski crystals. I do these things that I do not think in a Trumpian universe most artists are doing. As much as I do know that people want to throw rocks and burn things and express their anger, for me I want to document that so that there’s new institutional knowledge. I’m not into destroying; I’m into creating. I’m into layering.

I’m not wanting them to have a knee-jerk response, because we as humans look at moving images, and objects and art and advertisements, and of course – we sometimes turn away. I feel like there’s something so antagonistic, but also very proactive, about seduction, and about seducing people into a story, into a world, into a utopia. No one can speak of utopia without speaking of the lack of things, the lack of possessions. The lack of possessions of land, spirit, beauty, and so on.

You're a multi-disciplinary artist. Why don’t you stick to one medium?

Athi-Patra Ruga: One medium for me is not enough. It never has been. I have all the choice, why would I underuse all my talents? From the beginning, I’ve always had a very clear idea of why I use different mediums – it’s about the audience for me. My work is based on being performative.

The roots of my work come from the gay clubs – like in downtown Johannesburg – circa 2000. I come from that. Performing publicly in the street, you have to make a stage and beg (for) an audience. People only need to look through the windows of their hair salons, or their work, and look at your street art. It needs to be enveloping.

I remember, in the beginning, someone was like, ‘Oh my god, you had to be at Athi-Patra Ruga’s performance to see it,’ and that’s a very privileged approach when it comes to access to art. What if someone lived in a township or in the ghetto, and is not able to catch the train to see the show? Or their city does not have the infrastructure for them to be able to see public performance art? For me I was like, ‘Let me talk to a photographer, let me start documenting my work so I can put it on MySpace’.

What do you want people the people of London take away from your exhibition?

Athi-Patra Ruga: They should imagine that the whole space is a confessionary. Where they bring their stories, and they see these objects, and they see this movement of these queens, who are fed up with their gods who failed them. Who sent them to exile, who then start praising each other through the video like this big sculptural thing. It’s all very satisfying.

However, I don’t want them to think that they’re there to be entertained. At some point, there’s going to be a haunting that will happen. It’s something that I do plan on setting off, which makes it darker. They must go in there and they’ll spot it. If they don’t spot it they’ll be haunted when they get home. It’s very colourful yet frightening. The world is frightening at the moment. I’m making art in a frightening world.

Athi-Patra Ruga: Of Gods, Rainbows and Omissions is on at London's Somerset house from now – January 6 2019. You can find out more info here