From Francesca Woodman, to Carolee Schneemann and Judy Chicago, Mother Nature was a powerful force for liberation 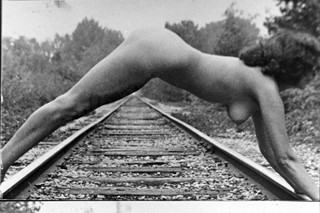 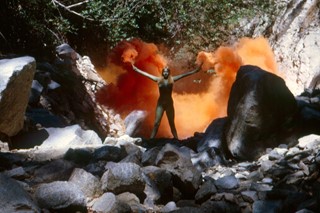 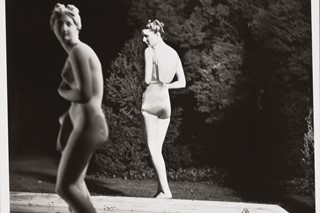 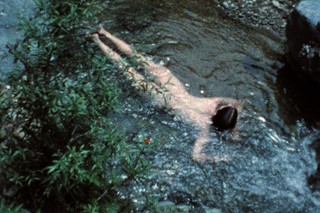 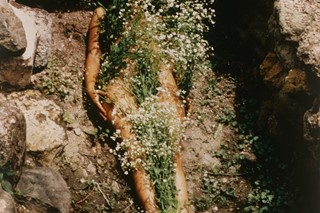 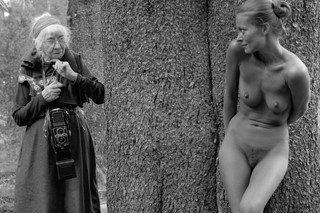 Sandro Botticelli, Pablo Picasso, and Lucien Freud have two things in common: they hold some of the world best recognised female nudes, yet they are all men. Existing across time and space, the way their nudes, like Botticelli’s “The Birth of Venus” (1464), have been famed in art history shows how women were stripped of their own natural state so men could excel in the art world. Constantly at battle with a society who would rather objectify the female nude than let women dictate their own representation, women began to resist artistically in many ways. Take the activist-artist group, Guerrilla Girls, for example, who launched a poster campaign in 1984 aimed at New York’s Metropolitan Museum. “Do women have to be naked to get into the Met. Museum?”, reads one of its most well-known posters, which targets the amount of male-produced female nudes that were in the space, as well as the museum’s role in propelling art’s gender disparity. Outside of poster art, many female artists took to staged protests and performance art within global cities to reclaim the female nude.

Beyond the city, women started to take nudes in the landscape as a form of resistance. The environment quickly became a key force in the fight for freedom as women turned to the purity and inherently feminine Mother Nature to set themselves free from the shackles of the patriarchy and the voyeuristic fixation of the male gaze. Tracing the evolution of this history is the Nevada Museum of Art’s upcoming show, Laid Bare in the Landscape, that will run from September 29 – January 27 2019. The show will run parallel to an Anne Brigman exhibition, and Laid Bare uses Brigman's work as the starting point for the evolution of the female form and the environment.

“For many pioneering feminist artists, the natural landscape was an obvious place to make work that resisted conventional patriarchal strategies of representation” – Ann Wolfe

Taking nudes in the landscape as early as the 1900s, Brigman would set the tone for women in the landscape, as shown by Judy Chicago, Carolee Schneemann, Ana Mendieta, Laura Aguilar, and more who all feature in Laid Bare. “To compare the proto-feminist landscape photographs of Brigman”, explains the show’s curator Anne Wolfe, ”to works by her feminist counterparts of the latter twentieth and early twenty-first centuries, is to weave a new thread through generations of visionary women artists who have aimed to further alternative ways of seeing and knowing.” Beyond reclaiming the female nude, the landscape became a canvas for women to escape the confines of institutional art spaces while attempting to correct the masculine destruction of the environment caused by men in the Land Art movement, and using the earth to reclaim identity from racial oppression.

To launch the show, Wolfe walks us through six key artists from the show and why the female nude and the landscape were two of the most important tools for their resistance.

Ann Wolfe: Many artists embraced the outdoors as a grand stage upon which to evoke ancient rituals to convey the idea that female power was deeply rooted in the natural world. Beginning in the late 1960s, East Coast feminist artist Mary Beth Edelson frequently ventured to isolated outdoor places like caves and ruins to perform rituals and other solo nude performances that she documented using time-lapse photography. By interweaving her body together with artefacts from nature, she effectively created female goddess archetypes in her works of the early 1970s. In “Goddess Head” (1975), for example, she photographed herself in a rocky canyon with her arms outstretched to convey a sense of power and strength. The pose can be compared to Egyptian and Mesopotamian female goddess statuary. She manipulated her final image by overlaying a spiralling seashell onto her head, further alluding to primaeval creation myths and female interconnectedness and interdependence with nature.

Anne Wolfe: Ana Mendieta began making experimental outdoor work with her body in the early 1970s. ‘I wanted my images to have power,’ Mendieta said. After that, she began to engage physically and actively with the landscape. She frequently made work incorporating her nude body as a strategy for reclaiming her cultural origins and underscoring her connectedness to the earth. In “Arbol de la Vida (Tree of Life)”, a 1976 performance resembling ancient creation rituals, Mendieta covered her body in brown mud that seamlessly blended with the trees around her.

In another instance, as part of her Silueta series, Mendieta buried her nude body in a sunken depression with white flowers growing atop her, leaving visible only her silhouette. Although the recessed space resembles a shallow grave, Mendieta’s physical insertion of her body into the earth established her as an active agent of renewal and regeneration in nature.  In her self-portrait, “Creek” (1974), Mendieta revised the story of the Shakespearian character Ophelia – the archetypal Victorian woman who was rendered voiceless, vulnerable, and near death in a pastoral body of water by the artist John Everett Millais in 1851–52. Mendieta upended that narrative by placing her own nude body, alive in the water, with her back facing us – as if to deny the viewer the privilege of gazing on her figure.

Anne Wolfe: Among the artists to respond to the Land Art genre was feminist Judy Chicago, who in the late 1960s observed ‘the macho art scene of southern California,’ and aimed to ‘soften that macho environment.’ Chicago’s subversive response to Land Art took the form of a series of outdoor performances on the West Coast called Atmospheres. ‘I was and am horrified by the masculine built environment and the masculine gesture of knocking down trees and digging holes in the earth,’ Chicago once said in regards to the work of Land Artists. Chicago’s response was to ‘feminise’ the landscape, which by the early 1970s involved choreographing nude women deploying fireworks to release coloured smoke into the atmosphere. The haze from these performances blanketed the landscapes where they took place. ‘It softened everything,’ she recalls of the tinted hues. ‘There was a moment when the smoke began to clear, but a haze lingered. And the whole world was feminised – if only for a moment.’ In one self-portrait from the series, Chicago stands in a rocky canyon as bright orange smoke pours into the space around her. Referring to herself as a “Smoke Goddess” (1972), Chicago evoked the practice of ancient fire rituals often associated with creation myths. Through their performances Chicago and Edelson transformed themselves into symbolic and empowered goddess figures, establishing women as agents of creation rather than passive observers of nature.

Anne Wolfe: More recently, female artists of colour have relied on performative and photographic strategies in the landscape to encourage conversations about social issues such as race, body politics, and gendered power relations. Acknowledging human resilience and strength are also key messages of photographer Laura Aguilar, who began photographing her nude body in the landscape in the 1980s. Aguilar situated her body among boulders, in rocky ravines, and near waterways in Southern California and New Mexico. However, because she is Latina, lesbian, and large-bodied, Aguilar’s photographs invite a complicated analysis of beauty, gender, and identity. Aguilar frequently imaged herself alongside large rocks and boulders, and in “Untitled #111” (2006–7), she sits with her back to the viewer before a large boulder that echoes the shape of her own body. Aguilar’s photograph shows her as continuous with the earth and an embodiment of its natural elements. Interestingly, whereas other feminist artists have embraced their relationship with nature as a positive identification, theorist Dana Luciano and Mel Y. Chen suggest in their essay “Has the Queer Ever Been Human?” that Aguilar’s self-identification with stones may actually reflect the dehumanizing treatment she has endured during her lifetime.

They write: ‘As in other feminist self-portraits, the female body (in Aguilar’s work) refuses either to open itself to appropriation by the viewer or to position itself as the object of the male gaze. Ironically, though, Aguilar performs this refusal not by intensifying her apparent status as subject…but by turning away from the demand for recognition within the circle of humanity. By mimicking a boulder, Aguilar enters the very nonhuman fold where some would place her, effectively displacing the centrality of the human itself.’

Anne Wolfe: Feminist artist Carolee Schneemann, working almost 60 years after Brigman made “Dawn” (her reclining nude self-portrait near the transcontinental railroad summit at Donner Pass), picked up the conversation about reversing power relations in gendered landscapes. In her work from the 1960s, Schneemann was one of the first women artists to ask: ‘Could a nude woman artist be both image and image-maker?’ In “Nude on Tracks, Parallel Axis” (1975), Schneemann catapults herself across a pair of receding railroad tracks. The double-stacked image calls to mind the railroad stereo photographs of American pioneer image-makers whose pictures of tracks receding into the distance were intended to symbolise American development and expansion. Schneemann’s nude body, however, blocks the tracks, and by extension, expansionist progress. While her photographs allude to the clichéd cinema trope of the helpless “damsel in distress” tied up in the path of an oncoming train, Schneemann clearly needs no male hero to rescue her. Her nude body is a free and active subject in the otherwise masculine landscape setting. Like Brigman’s placement of her body on Donner Summit in Dawn, Schneemann claims this developed space for women by forcing viewers to confront her presence and reconsider misplaced definitions of women as passive objects.

Anne Wolfe: Nigerian-born Otobong Nkanga photographed her own body to implicate the socio-cultural and environmental impact of humans on the landscape. Her large-format triptych “Alterscape Stories: Uprooting the Past” (2006) considers the development of the Canary Islands, on the northwestern coast of Africa, which were first colonised beginning in the fourteenth century. To make her large-format photographs, Nkanga fabricated a maquette of the island landscape on which to stage her photographic performance. Casting herself as both creator and destroyer, Nkanga physically uproots the ruins of historical buildings, which are replaced by modern skyscrapers that seem out of place in the otherwise natural setting. While Nkanga’s studio performance using a fabricated landscape maquette may seem to diverge from the outdoor photographic work of her peers, its intent was familiar: to assert a place for women as active agents in the history of landscape alteration and representation.