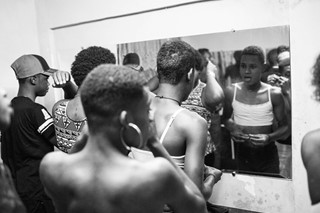 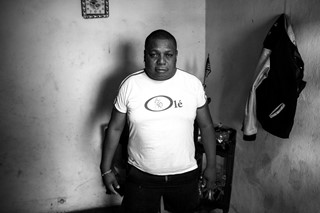 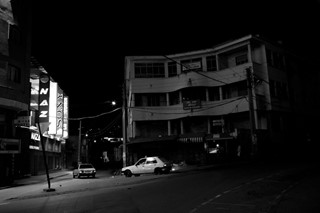 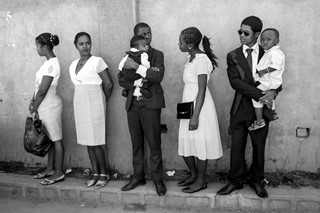 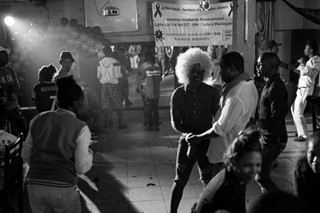 Being gay in Madagascar doesn’t echo the loud and proud essence of queer communities in the west. Oppressed by the weight of far-right wing politics, societal discrimination, and a lack of international media coverage, many queer Malagasies live in silence, only able to truly live out their identity in the incubation of LGBT safe spaces. Alongside this, unlike other Eastern-African countries who have found their voice in the international media-scape, queer life in Madagascar remains largely underreported: something that sets off a domino effect for LGBT awareness and acceptance across the state.

Understanding the severity that all this has had on queer life in Madagascar is British photographer Tom Maguire. After spending time working with an NGO in Madagascar in 2016, Maguire met a group of LGBT Malagasies living in a queer commune in the neighbourhood of Antananarivo. Telling the photographer that no journalists had been there before, they asked him to come back and document their lives. In 2017, Maguire lived and worked closely with the commune for a month, spending most of his time with the first woman to come out publicly in Madagascar as transgender, Balou Chabart Rasoana. As the founder of Solidarité des MSM Madagascar, one of the only NGOs on the island working to reach and support the country’s LGBT community, Balou is a prominent figure of Madagascar's LGBT underground.

“I didn’t want to portray them as victims or otherwise extraordinary, but individually complex like everyone else” – Tom Maguire

Maguire’s resulting photo series offers a rare documentation of three generations of LGBT Malagasies living in a queer safe-space as they party, love, and simply be. Maguire traces the intricate and intimate everyday lives of members of this tight-knit community, in a bid to demonstrate how queer lives in Madagascar are no different from the rest of the country.

Most importantly, these photos commemorate the work that Solidarité does, being the only charity working to aid the community’s biggest struggle: HIV. Because of Madagascar's unique terrain, some regions cannot be reached by HIV testing and treatment, which ultimately has a huge effect on the ability to track and treat the illness. Through Maguire's lens, we see the LGBT community's strength and resilience as they fight to change their future.

As we debut the series, Maguire speaks to us about why it's important that this underreported community receives an international attention.

Why did you decide to photography Madagascar’s underground LGBT community?

Tom Maguire: I first came to Madagascar in 2016 as part of my work with an NGO and I met a transgender woman named Balou during an HIV sensitisation session (a session which educates people to be more sensitive towards people with HIV). She and some of the members of her association suggested that I come back over a longer period of time to document their work, so I took them up on their offer and returned the following year. People typically associate Madagascar with lemurs and wildlife, and few people know about the poverty.

By doing research on the topic, it’s easy to see that the country is very underreported, especially in terms of its LGBT issues.

Tom Maguire: They said that they had never had any journalists speak with them before. My photography typically investigates broad global and social issues for individual stories with a focus on epidemics and gender identity, so while there has been a good amount of coverage on LGBT communities in eastern Africa, such as in Uganda, I wanted to document lives of a region who perhaps face similar treatment, but are yet to receive any international attention.

How did you go about documenting their lives?

Tom Maguire: I lived with them in this small commune and association in the neighbourhood of Ankazolava that provides a safe space for LGBT people across the capital to meet, share experiences, and party. I got to meet with a number of different members of the community daily, and I spent a lot of time with Balou, who’s the founder of the association, but also with a guy called Rahd, who is this incredibly smart 28-year-old guy, who's the treasurer of the association. We spent a lot of time talking about the work they’re doing both to increase awareness of LGBT life in Madagascar, but also to help ensure that as many people are tested for HIV in the community. Madagascar’s health system is incredibly fragile and underfunded, and they rely on overseas investors, so this association is doing work to test as many in the community as possible and to distribute condoms.

So HIV is one of the biggest issues with the LGBT community in Madagascar?

Tom Maguire: The biggest issue is reaching people. Madagascar is the fourth largest island nation in the world, yet it has some of the poorest infrastructures on the planet. Only a quarter of the island are accessible by road, so reaching and supporting LGBT people across the country and testing them for HIV is a formidable task and one thing that the country is falling short on. 14.8 per cent of MSM (men having sex with men) in Madagascar are living with HIV, making them the highest rate among the groups most at risk of contracting the disease. The others are sex workers and injecting drug users. Officials estimate that these figures could be even higher: less than 4 per cent of the population have been tested and of the 31,000 people that are infected, just 2,500 people are on treatment.

The problem is when the rates of people HIV seem low, lots of donors withdraw funding, which is another big problem they're facing at the moment. It’s something that the association are working to address. At the moment, they reach around 20 towns and cities around Madagascar but are striving to reach more people using Facebook and Whatsapp in order to support each other by staying in regular contact with different LGBT communities across the country, both in towns, and smaller villages.

Tom Maguire: In Madagascar, same-sex relations are not criminalised like they are in places like Uganda and Ghana, but LGBT people still face discrimination from many segments of society. I heard lots of stories of people facing abuse both physical and verbal, and the police do very little in response. The police and army run the show and they're quite corrupt. So many LGBT people in Madagascar live their life in secret by keeping their identity hidden from those closest to them. A number of people in Antananarivo have a wife and kids who are unaware of their sexuality, but at the same time, many families and communities are becoming increasingly accepting.

“Only a quarter of the island are accessible by road, so reaching and supporting LGBT people across the country and testing them for HIV is a formidable task and one thing that the country is falling short on” – Tom Maguire

Can you tell us about Balou’s story?

Tom Maguire: Balou came out at rather a young age – she was the first woman to come out publicly as transgender in Madagascar, around 15 years ago. She set up the association Solidarité des MSM Madagascar to reach as many people in the community as possible with HIV sensitisation sessions, getting them tested for HIV, and distributing condoms, as well as providing safe spaces for LGBT to socialise and get to know each other. She works with the community to organise events in the capital and in the parts of the country. She’s also very well connected. In addition to running the NGO, she’s also a hairdresser for a number of celebrities in Madagascar, and she gets invited to speak at a number of international events. But as I said, she has yet to speak with media or had her story documented over a longer period.

Did she tell you what it was like to come out as the first trans women in Madagascar?

Tom Maguire: Balou encountered discrimination when she came out. But with the support of her mother and those around her, people have become increasingly accepting, especially in the neighbourhood where she lives. She's now quite a well-known figure and people are very fond of her. When I say she's come out and that she's proud of her identity and is a well-known figure across the country, it’s something incubated within her own community. She and her community still not have had enough exposure outside of this world.

The commune where you stayed provides a safe space for LGBT Malagasies. Why is it important to have a space of safety for the LGBT community in Madagascar?

Tom Maguire: In any society where there could be a threat of violence or discrimination, having a safe space to socialise is important. Especially because some members of the association have a wife and kids who aren’t aware of their sexuality. Having that sanctuary space to speak with others who are perhaps going through similar things and to share their stories is really important.

How do you think the future of the community can be changed or can be progressed?

Tom Maguire: It's a tricky question and there’s no easy answer. In other contexts around the world, there's work to be done to legalise same-sex relations, but in Madagascar, they don't have that issue. It’s about ensuring organisations like Balou’s have got the resources to access as many LGBT communities across the country as possible and support them in coming out. It’s also about ensuring that as many people as possible are reached with HIV diagnostics and treatments.

Awareness that LGBT communities, in many ways, aren't that different from anywhere else must be increased. That’s one thing I wanted to show in the photos, that people can be LGBT but other things also, and that they’re not solely defined by their sexuality. Hopefully this comes through in some of the images. I didn't want to portray them as victims or otherwise extraordinary, but individually complex like everyone else.