Erin M. Riley’s powerful tapestries traverse the complex spectrum of female sexuality – from excitement and fear to pleasure and pain 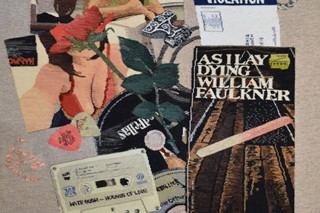 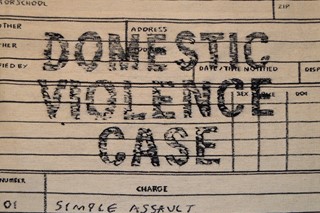 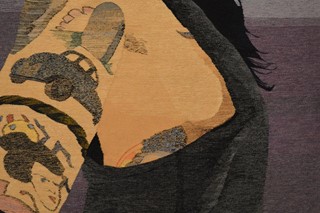 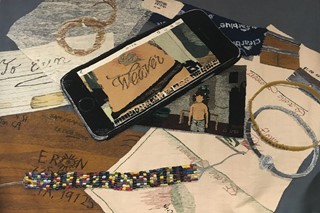 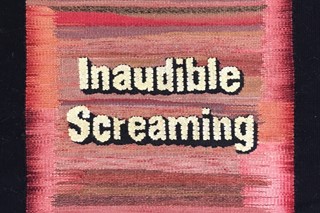 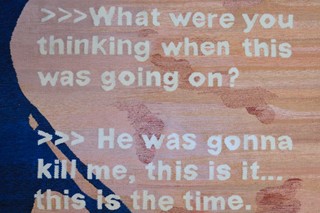 With the election of Donald Trump, a powerful unravelling began – not just of the morals and ethics of the US government but of the tightly laced silence around sexual assault. For American textile artist Erin M. Riley, the election cycle was “a bizarre turning point,” sparking conversations with her mother and sisters about horrific encounters that they had kept secret from one another.

“It’s been a lot of sobbing,” Riley says with the calm and steady voice of a woman who has faced her demons and lived to tell the tale. “I’ve been through a lot of reflection about my experiences as well as other people: parents, siblings, family members, or in the media. I wanted to talk about how relationships start and evolve, along with the traumatic experiences that exist all at once. There’s no either/or. You can be turned on one day and then afraid the next.”

“My mum had experienced negative things and gave that to us – so I always grew up ready for the time when I would be violated” – Erin M. Riley

“Growing up, talking about sex and sexuality was always presented as a thing that happens to us as women. My mum had experienced negative things and gave that to us – so I always grew up ready for the time when I would be violated,” Riley adds.

“I went on birth control because I grew up thinking that rape was inevitable and the only precaution against that was going on birth control so you wouldn’t get impregnated. I think I learned that in church, at an anti-abortion talk about rape.”

Sex education, in as much as we may call it that, finds its way into the exhibition title with the phrase “used tape,” a metaphor from an abstinence-only class. The term was used to denigrate a person who has had pre-marital sex and is, therefore, unable to form lasting bonds. These efforts to shame sexuality might be laughable if not for the fact that they underscore the larger and further reaching effects of assault on the female body and mind, during and after the fact.

Among the works on view are “911 Call” (2018), which features a blurred visual with the words “Inaudible Screaming”, as well as the actual words transcribed from an interview with a survivor for a piece titled “Your Heroes Are Our Villains” (2017), and Evidence (2017), a 4 x 11 foot tapestry of a rape kit that depicts the objects that will be used by doctors – a stark reminder of the emotional cost and physical trauma that the victim must endure so soon after the initial violation.

“The show has allowed me to put everything in a context that I feel comfortable with. I never wanted to make a show that was triggering or people would feel like their day was ruined. I didn’t want it to be exploitative because so much of my experiences have been that the way,” Riley says.

“I want the work to embrace reality. The way I deal with things is to fight against them, to embrace sexuality, sex toys, and solo sex in a ‘you won’t win’, kind of way – to thrive rather than be pushed down into a horrible place. We experience things that are bad and we can’t let it ruin us because, in the end, that means the person won: the assailant owns us.”

Riley’s resistance and refusal create a magnificent sense of buoyancy throughout Used Tape, showing the complex interplay between excitement and fear, pleasure and pain. The works create a consistent state of fluidity that allows us to appreciate the subtle allure of the “Side Boob”, the last minute shaving cut on the upper thigh from the spontaneous “4am Hookup Prep”, and the transgressive pleasure of eating Pringles out of a can nestled between your legs in “Once Your Taste Your Own Flavor” (2017).

“Each image is very deliberate,” Riley reveals. “Because it takes so long and so much prep as far as dying the yarn and preparing it to be woven. There is a lot of contemplation, almost meditation on working through the process in your mind beforehand, preparing for the hard part in this way. I am very committed to the work when I am ready to make the piece because I have to commit to the image for the next ten to 30 days.”

For Riley, each tapestry is an extension of the self, a warm hand of welcome and embrace that becomes a bridge between her personal history and those who have their own stories to tell, safe in the knowledge that there are safe spaces for conversation around trauma and healing that are both visible yet private, expansive yet discreet – a place where we discover are not alone in our joys and our grief.