I’m perusing Craigslist’s “Strictly Platonic” postings as I wait to chat with New York photographer Peter Garritano, and I’m struck by the sheer volume and variety of messages to sift through. “Anyone want to take a road trip to Six Flags,” inquires m4w, 29. “Gay guy seeks female friends,” announces another m4w who describes himself as “a great listener” who “loves to hear your stories.” “You can tune a piano but you can’t tuna fish!” reads yet another m4w’s playful plea for companionship, with a dated pop culture reference (REO Speedwagon’s seventh studio album, Wikipedia informs me) that went way over my head. If we were to look past all the low-key thirstiness that’s frankly par for the course online (looking at you, “Any POLISH girls out there? – m4w, 26”), what’s most striking about these messages is they’re all triggered by the same deep-rooted desire to connect, the same voracious appetite for intimacy.

28-year-old Garritano, who began the Seeking project as a way to practice documentary-type portraiture, has been similarly combing through New York’s enormous pool of Strictly Platonic hopefuls since February 2016, sending out hundreds of email requests to photograph these mysterious posters for posterity. The ongoing series, with new portraits regularly posted to Garritano’s Instagram account alongside their original Craigslist ad, is both an empathy-generating endeavour and an unforgettable panorama of urban loneliness. There’s an arresting sense of poetry and performance to Garritano’s IRL encounters with these soul-baring strangers. So many of the juxtapositions between the Craigslist ad and Garritano’s portrait read as gripping premises to short films. For instance, the divorced former model and bed-ridden soccer player who entices readers to visit him at the hospital with a description of his “private room with TV lol and big window facing an apt.bldg.”

Garritano, who’s still in touch with some of his participants, speaks of the project as a “fun personal adventure.” He neither has an end date for the project nor any plans for a prospective book or art exhibition. He hopes “Seeking” can contribute to breaking down stigmas and shame around the very fundamental human need to connect. We spoke with him about the safety of certain online forums and the mother of all urban paradoxes: how cities teeming with potential companions and confidantes can be such deeply isolating environments.

How familiar were you with Craigslist’s “Strictly Platonic” section prior to getting the ball rolling on this?

Peter Garritano: I was very aware of that whole culture. Growing up, I spent a lot of time exploring the darker corners of the Internet. I was on places like 4chan and Craigslist, digging around these strange back alleys that the Internet opens up to anyone. There’s this feeling of relative safety going into what are sometimes dangerous online realms, where you’re just comfortably sitting in your living room. That was intriguing to me, as I think it is to a lot of people, and it’s something I wanted to try to bring to light with this project. Craigslist happens to have this very active, constantly churning section of personal ads, with a huge volume of posts every day in New York just for this platonic section. I looked through it one day and found the posts to be so interesting, mysterious and diverse. I was intrigued to the degree I thought, “let me see if I can do something with this.”

Were you surprised people posting anonymous ads on the Internet agreed to be photographed – and put a face to their very private ad?

Peter Garritano: Definitely. But one thing that works in my favour is that these folks are looking for connection. So they’re already willing to meet somebody in person based on the proposal they’re making. Of course, there’s a huge amount of attrition, people flaking out or turning me down. I would say only one in ten even responds to my initial message and I get some of those people on the phone. Those I do meet with and take portraits of are generally very enthusiastic. I’m not in any way twisting anyone’s arm or trying to convince them to do something they aren’t comfortable with.

I know you don’t want to directly comment on any individual experience with posters, but has the project generated more unanticipated moments than you’d bargained for?

Peter Garritano: Well, there were experiences where I was struck by the difference between the person as we interacted in person versus how I assumed they would be based on their post. And usually, that was a favourable surprise, fortunately. Some of the posts seemed very strange or more exotic than I might have been comfortable with, but I was often made quite comfortable after having met the person one-on-one.

Your portraits capture the loneliness, vulnerability, and diversity in posters’ unique quests for connection. What’s your biggest takeaway so far about the things people actually search for on ‘platonic’ online forums?

Peter Garritano: I think a very base sense of companionship. There are definitely some obscure, strange and interesting posts – I’ll soon be meeting someone who is a cross-dresser who likes to dress as a Muslim woman in a burka, and I don’t think that’s something you’ll find in every American town. So there are these extreme ends of the spectrum of people looking for very unusual things, but overall, there’s just a base need for interaction and social fulfilment, just being with someone, having someone to talk to, that kind of thing. At their core, the things people look for are much more simple than what some of the complicated language of posts makes it sound.

Is there such a thing as big city blues? Having yourself moved to New York from peaceful Vermont post-graduation, did your experience echo some of that urban alienation?
Absolutely. I don’t know if it’s something that directly inspired the project, but there is some of my own personal experience in there. I think there are so many ways to communicate and make friends online nowadays, but that doesn’t necessarily translate into physical friendships. In a sense, being in a city like New York exacerbates those anxieties because you’re surrounded with and constantly confronted by various social networks. To not feel like you belong to any group of friends just further illuminates your lack of a social network or your social deficiencies. New York can be a particularly tough city for people with those kinds of anxieties and I think we all have them, to a degree.

“Let’s say you’re that man who wants to cross-dress in a burqa and you’re looking for someone else who is into that, where else do you go?” – Peter Garritano

Where does social media fit into this snapshot of modern loneliness: do you see it for its emancipatory potential to bring people together or as a potential trigger for isolation and envy?

Peter Garritano: I’m certainly inclined to go with the latter. I’m not sure what the research shows, but one thing I would be comfortable suggesting is that when we have all these networks online, there’s this elevated awareness of our social ranking as a function of friends or followers. I think by shining a spotlight on that in a very quantitative way, we’re able to evaluate our social worth or what one modern definition of that is, and I don’t think that is particularly useful.

So would these anonymous Craigslist forums be an antidote to all the social pressures that come with performing our lives according to a sanctioned script?

Peter Garritano: It seems to be a very useful way to put oneself out there in a way that protects your anonymity. Let’s say you’re that man who wants to cross-dress in a burqa and you’re looking for someone else who is into that, where else do you go? You can’t just walk into a meet-up group and ask whether anyone is interested without feeling self-conscious. Craigslist is a safe space for people who wouldn’t feel comfortable doing that – whether because they’re shy, or their interest is obscure or seemingly culturally deviant. You can just throw it out there. If someone reads it and is disgusted, well they don’t know who you are, so you’re protected. If they’re interested, then you have a reward in someone to share that with. It’s sort of therapy in that way. For the same reasons you would go see a therapist – that you feel safe and protected, free from the judgment of your peers – you can put yourself on Craigslist or any of these other anonymous forums in that same way. 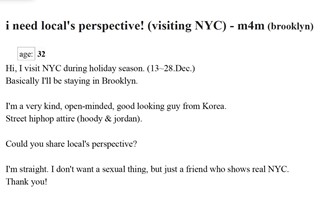 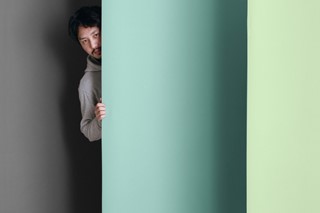 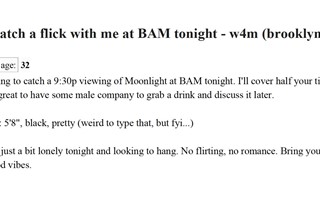 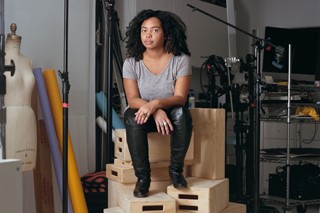 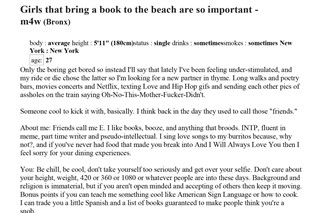 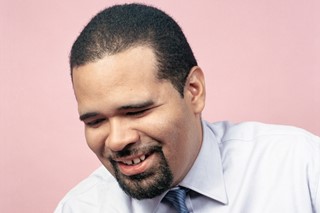