Taken from the spring/summer 2020 issue of Dazed. You can buy a copy of our latest issue here

Look, here’s the thing – you don’t have to like it, but these kids are really, really famous.

Thomas Petrou and Chase Hudson met via mutual friends in the summer of 2019. Petrou was a YouTube vlogger who had “always had a way with making money and being in business”; Hudson was a rising star on the video-based social media site TikTok and had graduated high school a year early. “Even when I had a small following I still made my full income from there so I’ve always wanted to share that insight,” says Petrou. “Teach people how to monetise their careers and make it last.” In 2019, just before he met Hudson for the first time, he’d started to feel like the internet was becoming “a little bit boring, like things were slowing down. There was nothing going on outside of (YouTubers like) David Dobrik, Emma Chamberlain, the Dolan Twins, James Charles. And all these TikTok kids were blowing up more than anything else but no one was paying attention.”

Are you content? How the internet rewired our brainsThe birth of the internet kickstarted a new human history, a total collective reworking of our behaviours, our self-image, the way we work, have fun, fuck, and interact
Hype House – spring/summer 202016 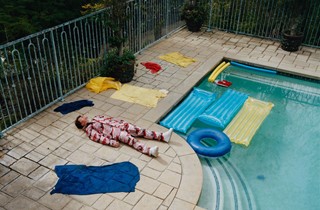 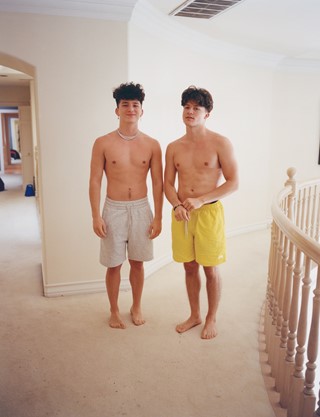 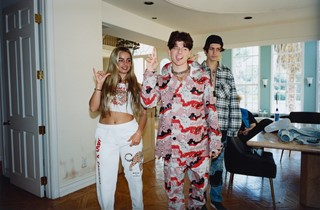 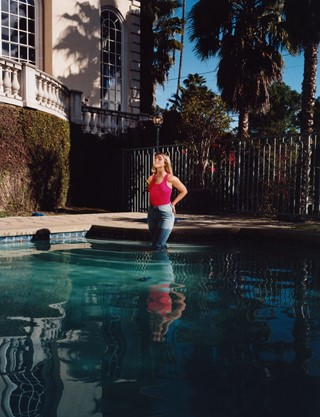 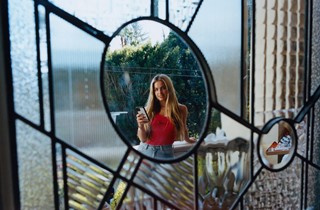 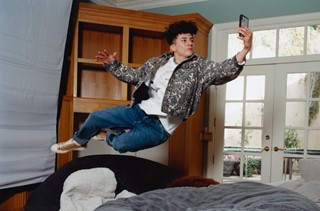 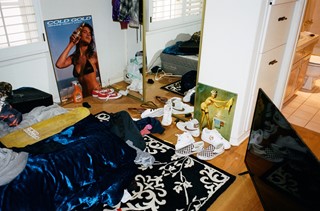 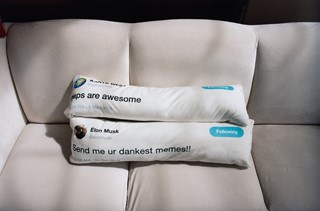 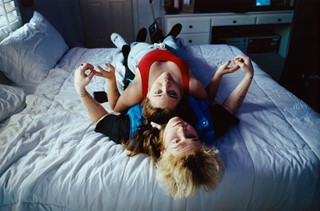 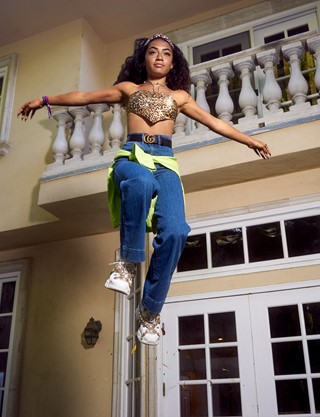 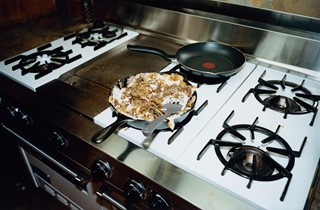 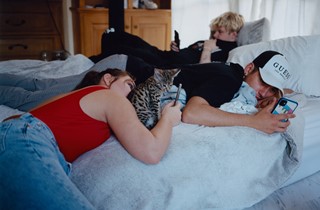 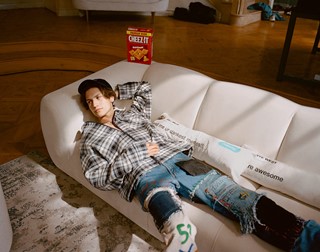 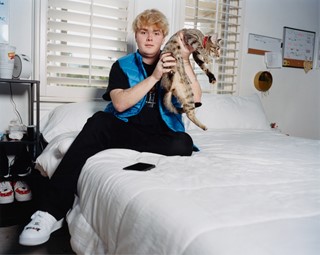 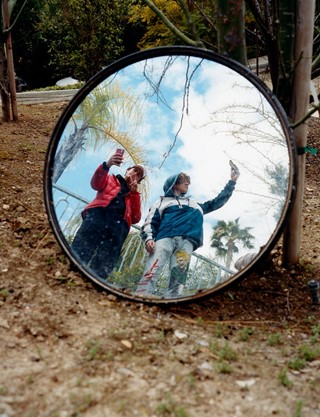 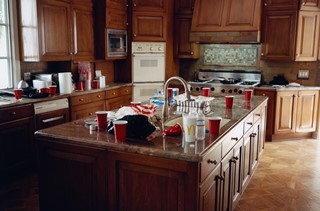 In October of last year, the pair sat down at Hudson’s manager’s house. They’d initially discussed moving in together, “but then we were like, ‘How dope would it be if we started the next generation, like a Gen-Z TikTok team?’” says Hudson of the seeds of Hype House, a content creator collective operating out of a rented mansion in Los Angeles. “I had a bunch of friends who did social media so we started making phone calls to people who we thought would fit in.” “We wanted to create an environment that people could come in and out of and film,” adds Petrou. “And Chase really believed in it. He showed me a lot of his connections, a lot of the people that are in the house today.” After that, Hype House came to life urgently. Currently there are around 20 members of the team, though only a few live there full-time. I ask if it’s true that it was only a couple of months before they moved in. Hudson corrects: “Like, three weeks actually.”

TikTok is a new kind of social media not simply because it’s the one most popular with teenagers, but because it makes the algorithm as we know it obsolete: repeating sameness is literally built into the UX. Not that there isn’t variety – thanks to this generation’s creative internet literacy and humour, infinite permutations exist. But the viral components – dances like the Renegade, songs like Doja Cat’s “Say So”, a sound clip of A$AP Rocky being interviewed by YouTube host Nardwuar upon arriving in Texas – remain the same in a given period. There’s an alternate language that exists on TikTok, a complex visual grammar of facial expressions, gestures, and dance moves that is a learned amalgam of the viral celebrities of the past five or so years: dancers, lip-syncers, reality stars, YouTubers, kids on Vine who set the tone for a lot of internet humour we take as given today. (While young black Americans led the way on Vine, viral TikTok, for now, remains an overwhelmingly white medium).

For some time now, if you were to look up any of these trending components, videos from Hype House members including 17-year-old Avani Gregg or 19-year-old Addison Rae will usually rank towards the top. “I don’t just make content based on what I think people want to see,” says Gregg, who specialises in make-up videos alongside the viral dances. “But if one of my videos drops down from trending, I’ll have a look to see what might be going on.” Addison Rae Easterling – known to her audience simply as Addison Rae – was an early member of the house. She downloaded TikTok in July 2019 and, by the end of October (“October 27, to be exact”), she had hit a million followers, thanks in large part to a video of Easterling and her mum dancing to Mariah Carey. Since then, mum Sheri (a stay-at-home parent) and dad Monty (a manager in the home business) have themselves become TikTok stars – all three are signed to WME for representation.

Easterling met Hudson in September 2019, when she travelled to California with her mum to meet some people in the industry. “I probably had about 3–400,000 followers on TikTok at the time,” she says. “(Then) I went back to Louisiana and (reached) a million at the end of October. Once I hit that, I started taking it more seriously.” Easterling’s entire family moved to California soon after, to “be where all the opportunities are”. She lives with her parents and two younger brothers, about 15 minutes away from the Hype House. Gregg, too, moved with her family from her native Indiana, but both tell me they spend a lot of time at the House. “We hang out, we go eat,” says Gregg. “No parties though. Nothing like that.” All members claim that the House – a sprawling LA mansion with the feeling of a spring-break Airbnb – is not a party house, though these photos, shot on a Sunday in early March, have a distinct day-after feel.

“When you become friends with someone, you usually end up making content with them” – Avani Gregg

“On an average day, we wake up and talk about what we think would break the internet that day,” says Hudson. “We sit down and have breakfast. If there are any new trends or memes, we’ll talk about it.” For Petrou, “a lot of my day is meetings and going around and making sure that people are staying active on social media. That they are working hard, developing their fans, working on merch… whatever it is. Living their lives as full-time Influencers”. In the TikToks, you can catch glimpses of the house members’ lives, not so different from those of countless American teens: Hudson before taking his first international flight; first relationships; Gregg, who was a trained gymnast before sustaining a back injury, practising a walkover.

When I ask if they ever get time off, everybody agrees: not really, but that’s OK. “We go on holidays,” says Hudson. “We were just in the Bahamas and went to Disneyland before that.” (All of the trips are well-documented on their respective channels.) Neither Hudson nor Petrou are from an entertainment family – though Hudson keeps his social media presence focused on himself, you can catch occasional glimpses of his two sisters. Petrou says most of his friends are from within the industry; Gregg still has a few back home in Indiana, though she sees them only rarely these days. “It’s just that when you become friends with someone,” she explains, “you usually end up making content with them.” “That’s, like, a part of the career choice,” says Hudson. “Everything revolves around it in a sense. Everything you do is for your supporters.” He sounds really genuine.

A WEEK IN THE LIFE OF A TIKTOK STAR

Addison Rae: Woke up and filmed TikToks early in the morning, then went to meet Mason Disick and made a few videos with him. Hung out with some friends the rest of the day.

Addison Rae: A day full of meetings. Went to Starbucks and filmed some videos with my go-to Pink Drink. Then I spent the rest of the day with my family.

Addison Rae: Did more meetings, made tons of videos going around town. Went to the Hype House to visit all my friends and make content.

Addison Rae: This was a really relaxing day. I invited two of my really good friends over and we made videos, vlogged and just talked about life. Every day consists of new ideas!

Addison Rae: I dyed my hair brown! I was super nervous but finally went for it and I love it. Made tons of videos and got positive feedback. I love my new hair.

Addison Rae: Woke up and got ready super-early, took photos for Instagram, then went to lunch with my mom and a friend. Afterwards we went to hang out with everyone and got dinner at Applebee’s. We also had a Nerf-gun war and made plenty of videos.

Addison Rae: Very calm day. Went to the Hype House to see the new merch. Filmed a YouTube video of my make-up routine. Made TikToks throughout the day!