Vladimir Putin, Kanye West and Harvey Weinstein have been added to the artist’s NSFW series 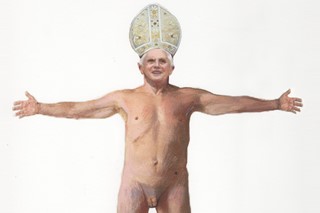 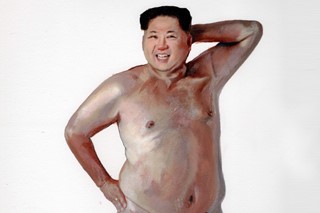 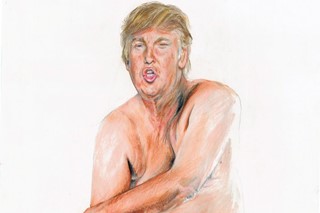 In 2016, Ilma Gore raised eyebrows with a painting of a naked Donald Trump with a ‘baby dick’. Made as defiant, visual criticism of his presidential campaign, the painting of the (now) American president with a small penis and no balls earned the artist death threats, a black eye, and an abduction from an Uber driver. As one of the most expensive nudes in the world, ‘Make America Great Again’ was priced at £1 million – but drew criticism from the political left and the right. Some said it was transphobic and encouraged body shaming.

Each day in December, a painting of a leader or notable male figure in their birthday suit will be released from her online portfolio. So far Gore has dropped Kim Jong Un and Pope Benedict XVI in pinky nude. Gore has made all the prints free to download and encourages people to create bootleg merchandise, prints, and “whatever (else) you want to do with them”.

While the artist did acknowledge Donald Trump in a statement for “the role I played in the criticism of your body”, it’s interesting that the artist is continuing with the micro-dick series.

“A body does not fit into one of two categories: right or wrong, strong or weak. And while I believe this, through my own understanding of implicit bias knew that a small penis is mostly viewed unfavourably,” Gore writes. “Gender and perceived penis size holds tremendous power in today’s society. If it didn’t, no one would have paid attention to my painting of you.”

Gore then outlines some of the issues surrounding bodies, from the transgender bathroom bill to Trump’s attempts to curtail reproductive rights, and how the president has perpetuated them.

“I do these paintings not because they are wrong but because I believe in my message, and I will not stop until it is clear. To call this body shaming is to ignore the oppression that created it. Artwork is not a guide to human decency and morality. That’s what the government is supposed to be.”

Stay up to date with Ilma Gore’s NSFW December calendar on the website.

The UK government is pushing sex workers offline and into danger