When fashion designer Nicolette Mishkan received the statement suit as a surprise birthday present earlier this year she knew it would raise eyebrows on the LA art scene. Teaming up with friend and photographer Aeschleah DeMartino (Refinery 29, Juxtapoz and The Bold Italic) the pair have brought the fishy tale to life in an ongoing series of unlikely outings with Nicolette donning the suit in sweltering conditions. From Tinder dates to the DMV, Permaid is becoming quite the little social butterflyfish so we caught up with the pair to find out where they're going to take this mad adventure from here and just what the hell happened when Permaid let loose at a wild motorcycle party. 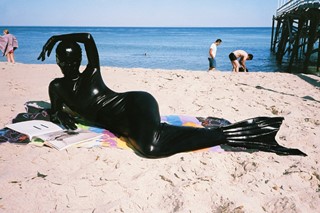 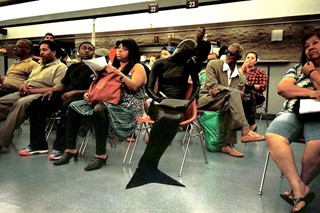 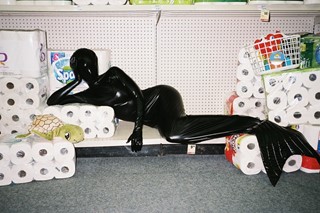 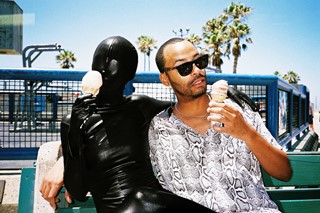 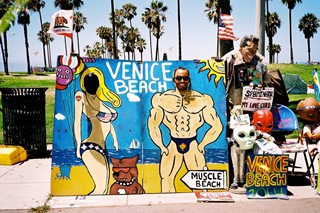 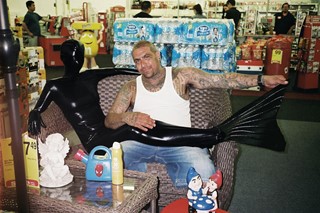 Nicolette, you got this suit for your birthday, was this something on your wish list?

Nicolette Mishkan: Permaid was a birthday gift from one of my best friends, James. He couldn't figure out what to get me, so it took a few weeks before it arrived. The delay made the gift an even better surprise. We never discussed it, he just saw it somewhere and decided it would suit me. He understands me very well. I would say, the suit was probably swimming in my subconscious and I just didn't know it yet.

You've taken Permaid on heaps of different shoots, which would you say has been the craziest in terms of reception from the public and which one was logistically the most challenging for you to shoot?

Aeschleah DeMartino: The public reception of Permaid is probably as intimidating as it is thrilling. We never know how people are going to react. So far, it generally starts with confusion and ends in fascination. Whenever someone shows interest or curiosity, I invite them into the shot. We assumed that we'd be kicked out of the DMV, but we got away with shooting for at least 10 minutes. Once I noticed the employees standing up and signaling to each other, I threw Permaid over my shoulder and ran out of the building. We were floating on adrenaline, which I think is why we have so much fun with whatever challenge we set for ourselves. Last weekend, we were invited to a birthday party in Las Vegas and took Permaid everywhere. Casinos are usually super uptight about cameras on the floor, but we somehow managed to get away with Permaid on the slot machines and me shooting her with a flash! I've learned over the years that it's better to ask for forgiveness than for permission. I'm just glad my camera didn't get confiscated.

“I wasn't expecting that so many people would be interested in Permaid on Tinder. I was wrong! We definitely get the S&M fetish crowd, but what's more interesting is the vanilla people who are so intrigued by her.” – Nicolette Mishkan (Permaid)

What's it like inside the suit? Do you enjoy being in there, I can imagine that latex is pretty restrictive – do you feel sexy in it or suffocated?

Nicolette Mishkan: For the most part, the suit is pretty comfortable once you get used to the restricted breathing. There are no holes, so you have to breathe through the fabric. It's not latex but the suit gets very hot in direct sunlight and retains moisture. Meaning, the sweat gets trapped inside. We can call the feeling sensual. I think that's the sexiest part about it, it's a very visceral sensation when you can feel your bound legs sweaty and rubbing together. Also, I can see people's silhouettes through the fabric but no details. This means no eye contact, which could be sexy in a BDSM kind of way. You're confined to a dark, hot, sticky suit and everything is out of your control. If you're into those types of things, then this is for you. Typically, we are out somewhere in public trying not to cause a huge scene. I'll slip the suit on as quickly and modestly as possible but I can't control if someone is watching. I'm not usually focused on feeling sexy when we're trying to get that perfect shot. That being said I do find it funny that regardless of what Permaid does, she can't help but be kind of sexy. It's a big part of her spirit.

You're currently working on Permaid's backstory – can you give us a whirlwind account of her early years?

Aeschleah DeMartino: Permaid was washed ashore in Malibu and adopted by a sweet Persian family and was raised in LA. We are creating a totally separate series based on her growing up and the struggles of her being quite literally, a fish out of water. Some examples of the photos take you through her 5th birthday party surrounded by family while she blows out the candles on her cake, her being bullied in elementary school to the phases and different trends she adopted in college.

Nicolette Mishkan: Permaid, like us, grew up in LA. We attempt to illustrate the ups and downs that naturally happen as people grow up from childhood through adulthood. Things like cultivating friendships, feeling outcasted, falling in love, being heartbroken. For example, Permaid catches her boyfriend cheating, which then sends her on a downward spiral. She fills the void with meaningless strangers and excessive partying until she hits her rock bottom. It is after that when she learns to swim freely again. She must learn to accept, appreciate, and find strength in her unique individuality.

You've been on a fair few Tinder escapades as Permaid, how was that? Do you get a lot of S&M fetishists swiping right?

Nicolette Mishkan: Both Aeschleah and I have been working on the Tinder account. Keep in mind, there are no photos of us - just Permaid. When we speak to people, it's in Permaid's voice. Maybe something like 80% of the people we swipe right (like) end up matching with her. To me, this was crazy at first. I wasn't expecting that so many people would be interested in the latex mermaid on Tinder. I was wrong! We definitely get the S&M fetish crowd, but what's more interesting is the vanilla people who are so intrigued by her. "Ash" and I have this joke that we've created the perfect woman. She seems to resonate with all kinds of people from different cultures, economic levels, sexual preferences, you name it. I guess the only thing they all have in common is a sense of humor. That, or they're just freaks like us.

You guys are also staging a Sea World protest soon – where did that idea come from and what are you hoping to get out of this?

Aeschleah DeMartino: Permaid's personality is a combination of Nicolette and I. Our ideas come from our interests and history. Politics has always appealed to me and animal rights have always appealed to her, so this piece is really important to both of us. Permaid is an animal rights activist, but The Sea World protest is so relevant because she is fighting specifically, against the cruelty towards sea mammals.

Nicolette Mishkan: I actually remember walking door-to-door with my friends as a kid and selling these garbage handmade bookmarks. All so we could make like, $20 to sponsor a whale (we succeeded). Animal and human rights just makes sense as something very important in order to maintain some humanity in the world. Nature is so inspiring and healing. Why destroy it? It should be respected.

Absolutely. You also recently took Permaid to a pretty full-on motorcycle party too – get into any sticky situations?

We hear Permaid is currently looking for a magazine internship – what are her career aspirations? Is it hard out there right now for a latex mermaid looking for employment?

Nicolette Mishkan: Permaid is an artist at heart. She's open minded and we aim to show her trying new things, failing, and succeeding. Just like people do in real life.

Aeschleah DeMartino: She's had a couple jobs so far. Sometimes she teaches scuba lessons, which she loves because she gets to spend a lot of time in the water. I had this fantasy that she frightens innocent things like, dogs or children. We talked about setting up a scene where she's babysitting and all the kids are crying because they're being watched over by this big, faceless, black creature. So far, dogs and babies love Permaid. She can't help but make everyone smile.