The Drag Race UK finalist discusses conversion therapy, Birmingham’s queer scene, and her debut single, Why Is She Calling? 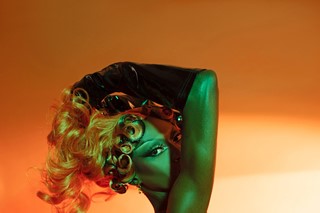 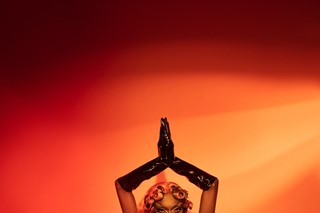 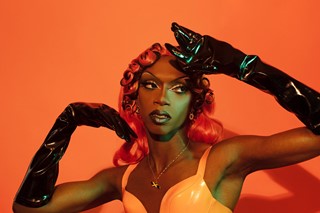 As she approaches next week’s final of RuPaul’s Drag Race UK, Black Peppa is already laying the groundwork for her next level up. Today, the self-styled “Caribbean Empress of Birmingham” drops her debut single Why Is She Calling?, a brilliant ballroom banger that cleverly interpolates Mya’s Y2K bop Case of the Ex. “Oh, this song is very Black Peppa,” Peppa says over Zoom from Glasgow, where she’s getting ready for a gig. “It’s me saying, ‘How dare you! Look at what you have right here and you’re still kicking off with this woman – absolutely not!’”

Why Is She Calling? really harnesses the infectious kinetic energy that has carried Peppa through to the final. Even when she’s stumbled in a challenge – like when she found herself in the bottom two after a lacklustre performance as Lil Nas X in Snatch Game – her killer lip sync skills have kept her in the contest. During our interview, Peppa is confident and positive, but her natural humility also shines through. She says the most surprising aspect of her Drag Race journey is the fact she’s now being spoken of in the same breath as “pros and legends” like fellow finalists Cheddar Gorgeous, Danny Beard and Jonbers Blonde. “In my head I feel like I’m still somewhat new to this [drag] and finding my way, and yet people are giving me all this support and making me feel like I deserve my place,” she says. “This is a tough, tough show, so that’s just the best feeling ever.”

Peppa – who was born Akeem Adams and uses they/them pronouns out of drag – says she always wanted to be a performer. Growing up in Saint Martin, a small Caribbean island with a population of around 74,000, she regularly took part in dance competitions but was told by her parents that it wasn’t a viable career like medicine or law. “I loved painting and did portraits back home for money,” she recalls, ”but none of that mattered to them because, like dancing, it was ‘just a hobby’.”

But as Drag Race viewers will know, Peppa’s decision to leave Saint Martin was fuelled more by stifling homophobia than any career frustrations. “It’s very, very difficult to be out of the closet on the island where I’m from,” she said in a moving Werk Room conversation in episode seven. “Because Saint Martin is so small, there’s nothing you can do that goes under the radar.” During this conversation, Peppa also revealed that she was outed to her parents after a fleeting moment of exploring her queerness. “I started sneaking out the house [and] going to the underground gay scene [where] there was one gay club,” she recalled. “Someone in the club was spying on me and sent my mum the video.”

“A lot of us have so many insecurities and feel like we can‘t be ourselves fully, but now, I’m like: ‘No! Life is short and needs to be lived’” – Black Peppa

Today, Peppa is candid about her struggle to feel comfortable with being queer. “I grew up in a religious family and tried to pray it away,” she says. She believes she always knew on some level that she was different, but it became harder to “blend in” once puberty hit. “Then I had an experience in church where they pulled me up to the altar, and I was like, ‘What’s going on?’” she recalls. “My mum was like, ‘They’re gonna pray for you.’ And it was basically, like, trying to pray the gay out. At that point, I realised the church is not for me and that I needed to get the hell out of there and migrate to another country.”

Thankfully, Peppa was such a stellar student that she won a scholarship to study Biomedical Science at Coventry University. She credits her three years there with crystallising her work ethic: she knew all along that her scholarship depended on good grades, so she knuckled down and graduated with a first. Crucially, the sense of freedom she felt in the UK also allowed her to reignite her passion for street dance and fully embrace her queerness. “After graduating I decided I was gonna start living for me and do what I really enjoy, which is performing,” she says. Soon after, Peppa moved to Birmingham and started go-go dancing on the LGBTQ scene.

A formative moment came when Peppa dressed as Catwoman for Halloween and Birmingham drag legend Yshee Black spotted her potential. “Yshee was like, ‘You should perform as Catwoman’, but I was very sceptical because I didn’t want to perform as a woman,” Peppa recalls. “But Yshee was very adamant: she was telling me, not asking me.” Today, Yshee is Peppa’s drag mother and says she could see Peppa was a star as soon as they met. “We don’t have that many Black queer acts on the Birmingham scene, so to see someone as talented, passionate and unapologetically Black, I just knew I had to give them any knowledge and wisdom I had.”

The Black Peppa persona took shape “gradually”, but once she honed a look that complimented her incendiary stage skills – “fetish punk glamour meets futurism, with a sophisticated twist of haute couture in there” – there was no stopping her. She won the Church of Yshee talent contest in 2019, kept building her profile and getting bookings, then applied for Drag Race UK in 2021. Peppa was so nervous about how her parents might react that she didn’t tell them until a week before the series premiered. “It’s been a big thing back home,” she says, “but my mum said to me: ‘I just want you to be happy, and if this is what you really want to do, I’m so happy you found it.’”

Like all great drag performers, Black Peppa has a persona and purpose that operates on several levels. “Whenever you hear my name, I want you to think about all the flavour and Caribbean bursts of energy coming your way,” she says. “And yes, I can be crazy, but I also have a great story to tell.” And that story is one of overcoming stigma and internalised homophobia. “A lot of us have so many insecurities and feel like we can‘t be ourselves fully,” she says. “But now, I’m like: ‘No! Life is short and needs to be lived.’ So when you think about Black Peppa, I want you to think about the best self that you can be.“

Why Is She Calling? by Black Peppa is out now.