We speak to SASSY 009, Das Body, and Girl in Red at this year’s Øya Festival in Oslo

Norway’s musical identity spans everything from wide-eyed cosmic disco to the outer extremes of black metal, the intricate synth pop of A-ha to Sigrid’s clean-cut chart hits. It’s tough to pin down, basically, but every year Oslo’s Øya Festival attempts to do just that. Its line-up combines a number of international names (this year’s billing included Brockhampton, Kendrick Lamar, and St Vincent) with homegrown talent, whether that’s a rapper like Cezinando or a DJ like Lindstrøm.

While those artists are already well-established in their home country, there were also a lot of emerging names playing, too. Reflecting the changing dynamics of indie and electronic music, a particularly high number of these artists were either fronted by, or made up entirely of, women. Here, we spotlight a few of the artists we caught at the festival who are making exciting, original new sounds, be it Smerz’s uncanny valley electro pop or Das Body’s sublime songwriting.

5 albums to stream this week
Øya Festival 20189 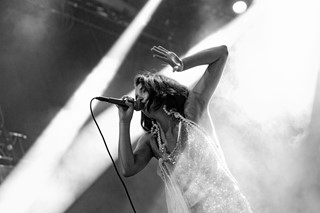 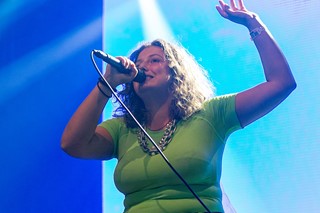 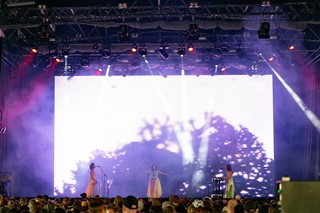 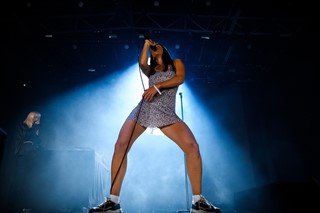 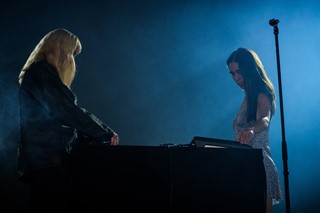 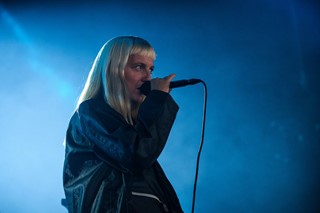 SASSY 009’s hypnotic electronic pop is incredibly distinctive for a group that formed only a little over a year ago. The band’s Teodora, Sunniva, and Johanna all grew up in Oslo. Teodora was the link – she knew Sunniva from secondary school, while she was also a jazz student with Johanna (not that either of them particularly enjoyed it). “Every week we’d have to play a concert in front of the class, and the teacher would tell us what was bad in front of everyone,” Teodora says.

“Jo, you have to work on your solo, it was terrible!” Johanna jokes.

The two grew bored with all the “boys playing the guitar” at school. “When you play with boys in a band, there’s a strange dynamic where they’re the guys in the band,” says Teodora. “If you sing and you’re a girl, you’re not taken seriously unless you demand to be taken seriously – and I didn’t. So I had a bad time.” Instead, they started making electronic music with Sunniva, who was at a snowboarding high school and making beats in her spare time. It wasn’t too serious at first, but they hoped their demo might get them a slot at Øya; a year later, they’ve released their Do You Mind EP and are playing the festival’s packed out Sirkus tent.

On stage, the three members face each other in a triangle formation. Johanna plays flute, Teodora sings, and Sunniva operates a bank of hardware and controllers, bringing each track seamlessly into the next. All three split and share vocals. You can draw some comparisons to other artists – rolling, lo-fi house beats a la Mall Grab or Godmode’s Yaeji and Channel Tres, Warpaint-esque vocal harmonies – but SASSY 009’s sound is their own. Plus, none of those other artists have a live flautist on stage. “We thought it would be funny – beats and flutes!” Johanna laughs.

Perhaps the reason SASSY 009 have such an original sound is that they never set out to make anything specific – sometimes, not thinking about being original is the easiest way to strike upon something unique. They all have different tastes in music (Sunniva likes indie and electronic, Teodora is into rap and neo-soul, Johanna listens to a lot of traditional music), and when I ask where they get their ideas from, Johanna replies simply: “Head, heart, ears.”

“And a lot of improvisation,” adds Sunniva.

“And a lot of fun!” says Teodora. “Thinking something is funny and doing it – then practising really hard on the funny thing until it makes it into the song.”

In fact, ‘fun’ is a pretty good guiding principle for the band, a contrast to the often self-serious idea of creativity that many other musicians put forward. Sunniva says that “it’s hard to do something creative if it’s not fun,” while Teodora perhaps puts it best: “You should have fun, and take the fun part seriously.”

The two tracks that Das Body have released from their debut EP show their incredible promise: “Boys” is all disco rhythms and low-key funk, while “Graceland” is a sophisti-pop song that builds and builds to an ecstatic release. What’s immediately distinctive about both tracks is frontwoman Elie Linden’s vocals, eschewing the sweet and flowery folk sound that’s frequently (if sometimes lazily) associated with Norway for something more buckled and unusual. “I’m a huge fan of hip hop women – Kamaiyah, or Rihanna even,” says Linden. “The way they use their voice, they’re not trying to sound pretty. That’s the most common thing in Norway, you’ve got to sound cute and female-like and all that. It’s just boring it to me.”

The group were all either friends or friends of friends from around Oslo. Their name came from band member Kim, who uttered the words ‘das body’, apropos of nothing, on a train. It has an extra kick when you say it with a Norwegian accent, taking on a much harder sound: “Dasss bod-ti,” band member Patrik demonstrates, lowering his voice an octave or two. According to Linden, the band don’t really have many shared musical interests, which is in itself part of their sound. “There might be a beat that sounds like David Bowie, or a lyric that reminds me of this movie,” she says, “but really, it’s all of our specific personalities that shape it.”

They’re signed to Luminelle Recordings, the same label who recently put out Helena Deland’s excellent new releases. Their relationship is fairly old school in its origins – Luminelle’s owner was visiting Oslo and happened to catch them live at an early gig. “There’s no way we’d have gone this far if we’ve signed with a Norwegian label,” says Linden. “We’d have met with people in Oslo or around Norway, but no one outside of it. Going to our Spotify artist profile and looking at where people are listening is really cool.” After one Norwegian gig, one of those fans sent them actual, IRL fanmail: “They sent us a letter,” laughs Linden. “They sent it to the venue!”

As strong as Das Body sound on record, Patrik says that their most comfortable environment is on-stage. At Øya’s Biblioteket stage, the group move through a succinct 20-minute set with a high energy that emphasises the interplay between each members’ instruments, with Linden putting on her best Elvis accent for “Graceland”. “The best place to listen to our music is when we’re on stage,” says Patrik. “That’s where I feel the music the most. We have a chemistry between us – we’re a good group of friends who make music together and have fun together.”

When Smerz take to the Sirkus stage at Øya, the duo’s Henriette Motzfeldt is sat motionless on a computer chair, staring deadpan at the audience. As she starts singing, her musical partner, Catharina Stoltenberg, silently operates electronics. Throughout the set, the two artists swap roles, trading their ghostly vocals over icy, after-dark electronic beats. The music is slow, sensual, and alluring, but it’s strangely lopsided too, where something is just a little off about it all.

The effect sounds not unlike experimental musician Inga Copeland, particularly her work with Dean Blunt as Hype Williams in the early 2010s. This isn’t just a sonic comparison, either. In their live shows, Copeland and Blunt would often introduce some weird theatrics – sometimes there’d be a bodybuilder would be on stage with them, or a masked dancer, barely visible beneath the intense fog of a smoke machine. It’s something that Smerz bring out in their set, too.

While they might be just two people on record, Smerz’s live show is a whole different proposition. Halfway through their set, two workout frames appear on either side of Motzfeldt and Stoltenberg, and a couple of shirtless, adonis-like blonde men appear out of nowhere and start doing pull-ups on them. Later, the stage turns into a quasi-fashion show, with dozens of women walking the stage’s perimeter in sequence. The result, like Smerz’s music, is hard to pin down – in one sense it draws you deeper into their world, while in another it deliberately alienates you from the show. It’s thrilling nonetheless.

Girl in Red (or, to stylise it correctly, ‘girl in red’) is Marie Ulven, who writes confessional, relatable indie pop songs. Her live show, she explains, typically involves “saying weird things, dancing, and jumping off the stage and making a mosh pit”. This all transpires during her set headlining Øya’s Biblioteket stage, which ends with her diving right into the audience. The crowd is a lot younger than it is for a lot of other artists over the weekend, and they seem to know Ulven’s music inside out, singing along to every word of “Summer Depression” and queer pop anthem “I Wanna Be Your Girlfriend”. Naturally, they all lift her up during her stage-dive, too.

You could make a comparison between Girl in Red and an artist like Mitski or King Princess – not necessarily in their style of songwriting, more in the response that their music engenders in their audience. Ulven might be a relatively young artist, but she already has a dedicated following, and her music means a lot to them – type her artist name into YouTube and you’ll find a number of tribute videos and cover versions. Still, Ulven doesn’t intellectualise her process too much. “I make some sort of pop music in my room,” she says of her sound.

“I’m a big The Smiths fan,” she adds. “I love happy melodies and miserable lyrics. Everyday life is inspiring, too. I’ll be on the bus and see an interesting-looking person. Then I’ll start fantasising about where he/she is going, and wonder what they’re doing in their life. I love making stories.”