In the video for “U.S.Gay”, written in response to the 2016 Pulse nightclub shooting, self-described ‘genre-queer’ New York City group Sons of an Illustrious Father appear alongside an ensemble of nine – dancing, falling, embracing, leaning against each other, pushing each other up, all in a glow of red and green lights.

“There was a sense of precarity in the movement that Jerome (Bwire) choreographed,” says guitarist, vocalist and multi-instrumentalist Lilah Larson, reflecting on the video. “Everyone sort of slowly falling but then catching each other. It’s the sense that shit’s not OK all of the time, but we’re in a continuous movement of ebb and flow, of being upright and being in collapse.” 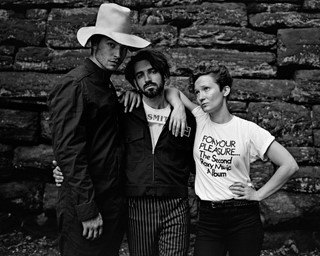 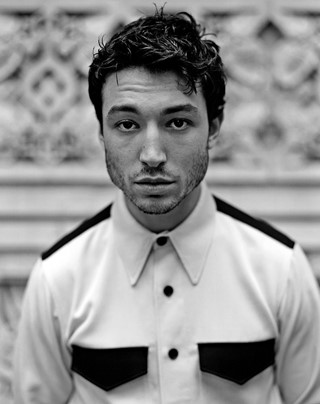 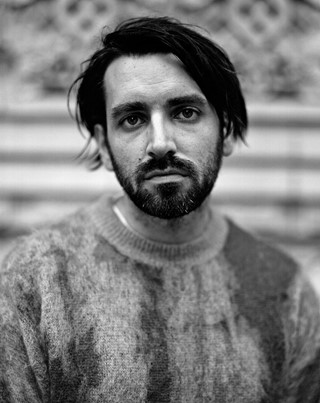 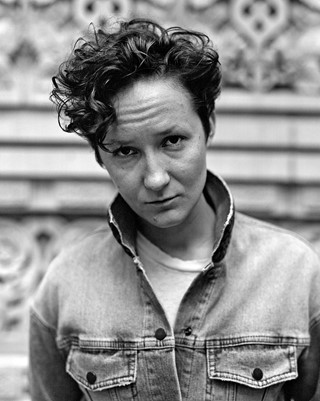 The track is an anthem of sorts, a fierce polemic dissecting the contemporary experience of what it’s like “to be gay in the USA” (to quote the song). For the visuals, the band turned to friend and frequent collaborator Mars Hobrecker, whose creative practice spans performance, illustration, photography and tattooing.

“Mars brought together the coolest community of ridiculously highly esteemed queer artists, thinkers and activists,” says Larson. Among the long list of participants was beauty journalist Arabelle Sicardi, activist and writer Tyler Ford, and designer and model Third Fernandez. “It felt very appropriate to the song, and its message. We wanted to communicate an affirmation of queer community, and he just brought together the dream community.”

“U.S.Gay” comes from the fourth album by the band, whose line-up is completed by Josh Aubin and Ezra Miller. Titled Deus Sex Machina: or, Moving Slowly Beyond Nikola Tesla, the June-released LP is a divergence for the trio – their first time incorporating experimental electronic sounds – but continues with their fluid tradition where all three write, sing, produce and switch instruments. The result is a sound uniquely their own. “Thankfully our fans are very weird, so they get it, which is very validating when you’re like, ‘We’re fucking weirdos,’” says Larson.

When we meet up in Brooklyn, the band excitedly chat about their array of collaborators, their relationship with their fans, and the feeling of catharsis from releasing the new record. They are forthcoming with sharp and thoughtful perspectives on activism, politics and technology, laughing about the early days of the band, when the group would travel the country in a converted school bus. A lot has changed since then: for one, Miller has become well-known for his career as an actor, taking on daring roles in cultish films like We Need to Talk About Kevin and The Stanford Prison Experiment, as well as a recurring part as The Flash in the Marvel universe. (But maybe no role demonstrates his taste for the esoteric like his recurring one in the band.)

The band’s line-up has changed, too. Originally an acoustic project started by Larson in 2009, Sons expanded to a five-piece before alighting on the current line-up. As far back as their self-titled debut of 2009, says Miller, “you could hear where things were starting to come apart at the seams. We started with rules. We were only going to play acoustic instruments. Then we were like, ‘But electric instruments are fun!’ and then we were like, ‘Fuck all these rules, drum machines are great.’” On the new album, they retain the expressive twang and vulnerability of their folksy beginnings, but with added tension, sharper dynamics and an ever-present, anxious digital hum.

“It’s strange to be called an activist band sometimes, because we aren’t putting our bodies on the line” — Ezra Miller

To visualise Deus Sex Machina’s second single, “Extraordinary Rendition”, the group tapped another friend, filmmaker Rafe Scobey-Thal. Shot in England, the video features the band in dark, elaborate costumes by Colleen Atwood, the Oscar-winning costume designer who the band describe as “a person of absolutely preternatural ability”. Miller’s mum, modern dancer and choreographer Marta Miller, was in town by chance, and stopped by to contribute as well. As the band describes it, she listened to the song twice, and quickly envisioned the perfect movements. “The first public performance I did was a dance about maternity with my mom when I was six,” says Miller. “As a band, we have always consulted her wisdoms.”

Songs like “U.S.Gay” and “Extraordinary Rendition”, with its nod to the CIA-sponsored abduction programme that saw terror suspects detained without trial during the war on terror, are apt entry points into the band’s political ideologies. “It’s strange to be called an activist band sometimes, because we aren’t putting our bodies on the line or in the way,” says Miller, who today wears a black-and-pink t-shirt reading ‘WILD FEMINIST’. “But we are trying to be engaged and responsible as people making art in the world.”

For example, the band have actively politicised their live shows through their creative advocacy for all-ages accessibility: recently, they hosted an under-21s-only show where adults could only attend accompanied by someone under the age of 21. “We remember that, as young people, music was a vital lifeline for us,” says Miller. “So often the people who stand to benefit directly from our work are denied access because of an economic model that ties alcohol sales to the sale and promotion of a show. Kids deserve space where they get to cut loose and hang out with one another.”

“You have no idea how many venues we had to get into fights with because we were underage,” continues Miller, remembering their first tours. “I would always have a bunch of heavy drum equipment in my hand when the bouncer at the club asked for my ID. It was like, ‘Oh, I just have to put this down... ’”

Miller and Larson were literal kids, 10 and 12 respectively, when they met in musical theatre classes at school – Larson doing sound, while Miller was “a full-on shameless theatre nerd” taking part in productions like Into the Woods. (It wasn’t until seven years later that they met Aubin, who grew up in Massachusetts.)

Over nearly a decade, Sons have released four records and toured extensively. They also know how different it is releasing politically engaged music in today’s climate of social media activists, Instagram fan communities and a perma-tweeting president. Miller notes the challenges that come with being a band with political goals up against the constant presence of the ‘feed’ – a culture that makes us totally distracted, then angry for five minutes, then totally distracted again.

“As people trying to effect change, it is critical to be wary of false rewards,” says Miller. “The way hegemony props itself up is through gradual concessions, and there’s a lot of room to make such concessions in this virtual world without changing the dynamics of oppression.” He adds how vulnerable social media-facilitated community-building can be – a sentiment that applies to activists, but also to anyone trying to bring people together through music. But the band wouldn’t have it any other way. “Not talking about these things is itself a political choice,” says Larson. “(We choose) to be vocal, to turn ourselves into an amplifier for other voices.”

Miller agrees, acknowledging the need to push beyond social-media optics: “It can sometimes feel like a movement is reaching critical mass because there are so many followers, but, if it only exists in that (virtual) world, I don’t know if the waves transform the landscape.” Clearly, the band hold the resultant anxieties close, wrestling with them in their own protest- fuelled music and how they choose to speak on it. “(It can be) overwhelming. The impulse can be to disassociate. But we need people who understand how these things work to be participating, not to all work for the government.”

“We also need more people like Josh,” adds Miller, nodding to his tech-savvy bandmate who, though quiet during our chat, was instrumental in creating the band’s recent, experimental sound. (Aubin, who works with digital media through making video games, has done the most previous work in electronic music out of the group.)

“It’s all about recognising what technology is and manipulating it as you need to,” says Aubin. “You can’t deny that technology is engrained in all of our lives. You can fruitlessly try to resist it or just learn to work with it in ways that don’t destroy everything.”

“Any plan for our salvation includes the renewed use of broken tools,” continues Miller. “We understand that in a certain way, because it’s true of art as well. Any of these tools can reinforce a society’s self-destructive tendencies, or they can be reinvented to serve what I feel is their true purpose, which is to challenge.”

Deus Sex Machina: or, Moving Slowly Beyond Nikola Tesla is out now