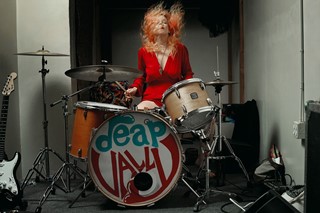 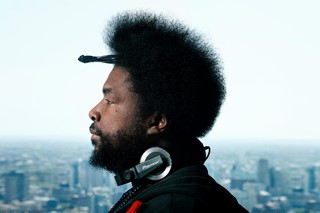 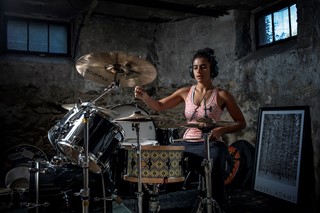 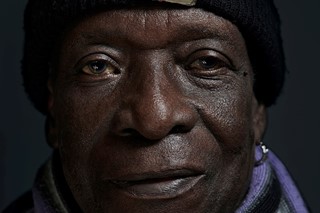 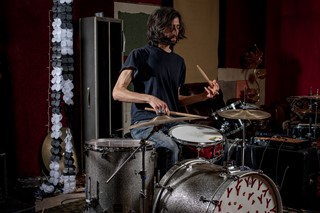 A band is only as good as its drummer, so they say. The butt of every band’s jokes yet the most crucial member of any outfit, a drummer’s job – supplying the beats, keeping the tempo, adding textures, making sure all heads are overwhelmingly nodding – never goes amiss. There’s a reason why John Bonham or even the Jesus and Mary Chain’s one-time sticksman Bobby Gillespie are so adored. Deirdre O’Callaghan’s new photobook The Drum Thing compiles selected interviews with – and dazzling images of – some of the world’s greatest drummers, filled to the brim with everything you could possibly want, up to and including touching, funny anecdotes from the Clash’s Topper Heddon to shots of the tom-tom-thumping Janet Weiss of riot-grrrl heroines Sleater-Kinney. It’s a generous offering – 256 glorious pages with all-colour photos – and comes loaded with quotes. Here’s a few from some of music’s most influential and admired drummers.

A hip hop stalwart with an encyclopedic knowledge of music to boot, Ahmir “Questlove” Thompson is the drummer for the Roots (also the house band for The Tonight Show with Jimmy Fallon) and has played for the likes of Elvis Costello, D'Angelo and Jay Z.

Questlove: I got introduced to jazz as a punishment. I had deceived my older cousin into buying me a 45 of a song that my parents wouldn’t allow me to have. I asked them for it, and they said, ‘No, we don’t like that song, that song is dirty, you’re not getting it.’ And after about three weeks of plotting and scheming, always missing the song when it was on the radio, trying to record it … It was a song called ‘Juicy Fruit’ by James Mtume, who was the percussionist for Miles Davis. It seems harmless by today’s standards … All of Miles Davis’s musicians were heavy jazz cats but in the mid-’80s they all wanted to get paid, so they all did regular pop music. This was one of his breakthrough singles and Notorious B.I.G. sampled it for his first single, ‘Juicy’. But I was twelve at the time and I didn’t understand double entendres. I really thought, maybe it’s about a stick of gum, Juicy Fruit. Stupid me! I thought it was about candy. I didn’t know it was a metaphor for sex.

Famed for his ability to play with a precision that rivals even the best drum machine, Stephen Morris has enjoyed success in two of the most influential Manchester bands, Joy Division and their later rebirth, New Order.

Stephen Morris: If you wanted to hear music, apart from in your bedroom, you couldn’t go to discos or anything like that: you had to go to a concert. I mean there were discos in Macclesfield but you had to be a lot older and have all the right gear to get into them so we couldn’t. So the only thing was going to concerts at the Free Trade Hall and this great place called the Stoneground, and you’d go to see bands like Genesis – that was a band I saw a lot. Phil Collins was an interesting, and probably is still an interesting drummer. That was what you listened to. And when punk rock came along you pushed all those records under your bed and pretended that you’d never liked them at all! ‘Oh, no, no, no, I’ve always liked the Sex Pistols, the Ramones!’

Purveyor of modern blues and a tireless musician with an extraordinary work rate, smashing the cymabls for the Dead Weather is just one of the many, many talents of mutli-instrumentalist Jack White.

Jack White: Somebody told me early on, when you go onstage you have to act like you own the joint; and I always say that to younger performers when I’m working with them. And when we put on live shows here, they say, ‘Easy for you to say, Jack, you do own the place!’ If you see a performer onstage and there’s any sign of nervousness or second-guessing or insecurity, as a viewer you lose respect for that person. Even if the music’s no good or your performing’s not that good, if you act as if you own the place, it sort of sells it.

Arguably the father of the Afrobeat sound and described by Brian Eno as ‘perhaps the greatest drummer who has ever lived’, Tony Allen was the backbone of Fela Kuti's Africa ’70 ensemble – and a frequent collaborator with Damon Albarn (Rocket Juice & the Moon, The Good, the Bad & the Queen).

Tony Allen: I taught myself by listening. I try to invent my own way of playing. It’s still a puzzle to some people, the way I play my drums.

Drummer for krautrock legends Can, the late, great Jaki Liebezeit was responsible for some of the most rhymically complex, propulsive sounds of the 70s.

Jaki Liebezeit: It was 1968; it was a year of revolution. That started with some student riots in Berlin and something happened in the mind, worldwide, I think, at that time. Also in music and in art and painting – pop art came, and that’s why we all had the idea to do something new. We were fed up with that old post war thing. We came together, all of us had the same feeling, and I think that gave us the power to do something new.

Just as adept at feral punk with Yeah Yeah Yeahs as he is at avant-garde noise experiments with Alan Licht and John Zorn, Brian Chase’s kinetic drumming stands out in the debris of New York’s art rock underground.

Brian Chase: I often think about this idea of getting to the edge and jumping off. A lot of the technical aspects of the music are designed to get us right to the edge of being conscious of keeping time – and those are important, but I feel they still only get us up to the edge. For us to really get into it, we’re going to have to have faith and jump off. And so to make up for that extra little distance, that’s where we have to let go. So we use the technique to get us to that point where we can let go and really get into it.

Julie Edwards: I like playing that’s ridiculously heavy. Someone who stays behind and makes everything so pimp – like John Bonham.

One-time winner of the award for Young Drummer of the Year, PAULi the PSM is Damon Albarn’s go-to percussionist, having toured with Gorillaz and Albarn’s band, the Heavy Seas, while making his own music.

PAULi: The drum machine’s got a spirit in the same way that a human drummer has. The traditional thing to say would be like, you know, a human drummer has energy and it’s alive and will bring its personality and its touch and its flavour. No, the drum machine is exactly the same: it’s an instrument, and you’re programming the drum machine in the same way that you programme your body to play the drum kit. When I play a drum machine, I really go to town on the fact that it’s an instrument that needs to be pushed to its limits in the same way a clarinet or a drum kit or whatever should be played. I think drum machines are amazing. Look at Jam and Lewis – those guys made patterns that drummers cannot play. Look at what Skrillex is doing now with dance music. You can’t keep up with that stuff. Questlove, he replicates drum machines. Look at what J Dilla did with the drum machine. That is more than what any drummer can do. Except Quest or Chris Dave.

As devoted fans of Death Grips and dozens of YouTube videos will attest, Zach Hill – also a member of math rockers Hella – is considered a god for his frenetic, breakneck drumming and forceful delivery.

Zach Hill: I have a hard time talking about music because I play music. It’s my whole language and I play to express things that I can’t verbalize. I’m slightly a masochist by nature in a lot of ways. Playing, I want it to be biting me, grating on me while I’m doing it. It’s like I’m concentrating so hard that I’m not concentrating at all. I want to be overtaken when I’m playing and then that’s the time in my day not to think about other things and let something else in, let my body host a different type of energy through playing the drums.

Deirdre O’Callaghan’s The Drum Thing is out now