While OFWGKTA’s members are focused on solo projects today, the photos and videos they shared during their ascent provide a fascinating insight into their collective identity 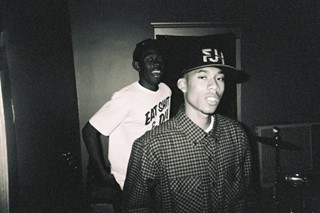 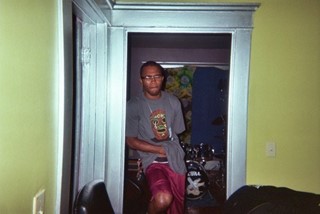 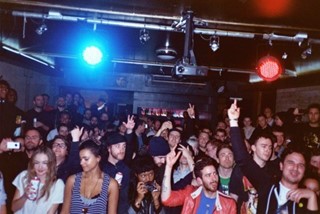 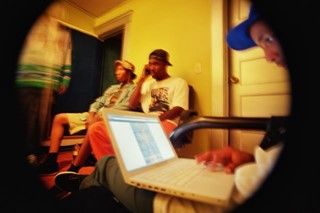 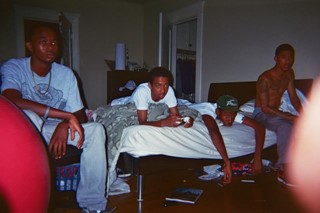 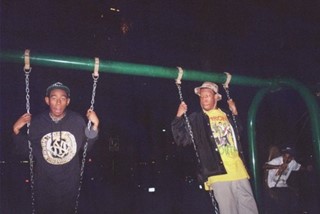 It’s 2012, and nearly a thousand kids have made their way to Birmingham’s O2 Academy prepped in the same uniform: long white socks, shorts, five-panel caps, and big, ill-fitting shirts. Some have skipped school to wait at the venue to catch a glimpse of Odd Future – also known as OFWGKTA (or, to the diehards, ofwgktadgafllbblsbfbnykwtfwatcesfehbjdstk). Inside, a generic Spotify rap playlist runs through crowd-pleasers like Wu-Tang Clan’s “Gravel Pit” before the group comes onstage. While OFWGKTA were regularly compared to Wu-Tang in their collective spirit, they were the furthest from it: these were southern California suburban kids, rapping about being a suburban kid. “I created OF because I feel we’re more talented than 40-year-old rappers talking about Gucci,” ringleader Tyler, the Creator announced in the opening track of his debut mixtape Bastard. Their mission statement was clear. Their songs were honest, with themes of suicide and depression rife in their music – and in Tyler’s especially. OFWGKTA had tapped into the mind of a 16-year-old outcast the same way that Nirvana and Marilyn Manson had.

Fast-forward to 2016, and Odd Future as a collective no longer exists. Instead, many of their members have struck out as solo artists – and enjoyed phenomenal success in doing so. Tyler has four albums under his belt, his fashion line Golf Wang has been seen on runways, he’s working alongside artists like Kanye West, A$AP Rocky, and Pharrell, and he has a documentary set to arrive shortly. Hodgy (formerly Hodgy Beats) is releasing his debut album in December with collaborations from Lil Wayne and Busta Rhymes. The Internet, the band featuring Odd Future veterans Syd the Kyd and Matt Martians, have broken into the mainstream with their latest album Ego Death. Frank Ocean returned after a four-year absence with his profound new record Blonde. And Earl Sweatshirt, following his ‘Free Earl’ hiatus, became a big name in alternative hip hop, collaborating with artists like Knxwledge and King Krule.

It’s remarkable that OFWGKTA’s members managed to forge their own distinctive paths outside of the group given just how strong their collective identity was. Thankfully, the rise of Odd Future was captured almost in real-time on Tumblr and YouTube, and they’re still being updated to this day. Looking back, you can see rare behind-the-scenes photos (going back to 2010) that capture the group in their ascendancy and show affiliates, like a young Vince Staples, who’d go on to shape the music world in their own way. Looking back on it today, it’s a reminder of how exciting the group were to watch and a fascinating insight into their history.

In 2009, Tyler Okonma was an 18-year-old in Ladera Heights, California, trying to break into the music industry with little commercial success. His debut mixtape, Bastard, was released that year, a harrowing project including a number of tracks dedicated to his AWOL father. From living on his grandmother’s floor, his life was about to change dramatically. With the attention he was getting from this project, he and his friends would start up a collective including Tyler, Left Brain, Hodgy Beats, Matt Martians (now of The Internet), Jasper Dolphin, Syd tha Kyd and her brother Taco, Casey Veggies and Brandun DeShay (a Chicago artist affiliated with the group, before a beef between him and Tyler caused him to leave). Later, as their popularity had grown through their music videos and mixtapes, came new members: Earl Sweatshirt (who would go on involuntary hiatus to a Samoan boarding school until 2012), Frank Ocean, Domo Genesis and Mike G (who replaced DeShay). They would record at Syd’s house – early sessions can be seen in the MellowHype’s introductory video. Photos from this time show a youthful crew of skaters and rappers on the brink of recognition, including an unknown Frank Ocean and bedroom studios. That year, they had their first two shows outside of Los Angeles – one in New York and one in London. The London show sold out 48 hours after being announced. The world was at their feet, and the family spirit was far from fleeting.

By 2011, Odd Future were uploading famous YouTube performances and posting photos with N*E*R*D and from behind the scenes of The Tonight Show. It was the first year they tasted global success, selling out shows worldwide and winning awards off the back of a vomit-filled music video. On February 10, 2011, Tyler released “Yonkers”, the first video from his debut album Goblin. The video included Tyler (or Tyler’s alter-ego Wolf Haley) eating a cockroach, spewing it up, and then proceeding to hang himself. Hip hop didn’t know where to look. The video was nominated for video of the year at the 2011 MTV VMAs. From then on, other members started releasing more and more records. Hodgy Beats and Left Brain released their album BlackenedWhite, Frank Ocean put out Nostalgia Ultra, which would establish him as an R&B star, and Tyler collaborated with Pusha T as well as The Game and Lil Wayne. The collective still maintained their competitive spirit, even while artists like Pharrell were aching to be associated with them.

2012 saw continued success for Odd Future. The world was catching on to their defiant spirit – but criticism followed, even from Jeremy Paxman. Their group’s profile grew bigger as they grew older, and it’s easy to see more professional outlook develop amongst the crew. Faces like Kanye West and Common begin to appear, and we get a behind-the-scenes look at the start of their their television debut – somewhere between Jackass and The Chappelle Show – with Loiter Squad. Earl Sweatshirt returned to the group making his valiant comeback performing with his peers at Hammerstein Ballroom in New York. Frank Ocean’s Nostalgia Ultra follow-up channel ORANGE was nominated for six Grammys, winning best urban contemporary album. The group topped it all off with The OF Tape Vol 2, which included “Oldie”, where nearly every Odd Future member contributed a verse. The Californian outcasts had solidified themselves as the new face of hip hop, fuelled by a DIY attitude and independent thinking.

Odd Future took their last step out of the underground and into the mainstream in 2013. It’s here that the Tumblr archive starts to move from casual, disposable shots towards more glossy images (though the celebrity features, including Drake, still look as candid as ever). This was also the year Earl Sweatshirt returned with his comeback album Doris, with videos directed by Tyler himself. The Internet released Feel Good, a more jazz-focused project that saw them explore experimental R&B. Tyler, when he wasn’t making banned Mountain Dew adverts, released his third project Wolf, an album featuring collaborations with icons like Erykah Badu and Pharrell, moving beyond the skater rap and twisted lyrics he’d long been associated with. This was also his last project to feature collaborations from fellow Odd Future members, with Earl and Domo Genesis jumping on “Rusty” and “Trashwang”, sounding like a hark back to Goblin’s “Bitch Suck Dick”. Tyler and Earl, however, looked like a rekindled romance: their EarlWolf tour saw them supporting the likes of Eminem and liaising with MF Doom. Elsewhere, MellowHype (Hodgy and Left Brain’s project) switched up their style with a new name, MellowHigh. 2014 saw the group playing at Wembley Stadium and hosting their own festivities at Camp Flog Gnaw, a lineup boasting Pharrell as headliner.

2015: CRACKS IN THE FOUNDATIONS

By 2015, fewer photos were posted to Odd Future’s Tumblr and more of them were commercial, mainly promoting albums and Golf Wang lines. After a period of separate ventures among the members, including Tyler’s project Deathcamp and his newfound friendship with A$AP Rocky, the annual Camp Flog Gnaw festival arrived with a lineup including Snoop Dogg and Rocky. That year, Hodgy Beats, Domo Genesis, Left Brain and Mike G performed together, billed under the name OFWGKTA. Tyler, the Creator, however, was the headliner. During the set, Hodgy called out Tyler for allegedly treating the rest of the group as disposable while Tyler watched the set. During Tyler’s set, he replied to these claims with “N****s got me fucked up. I put too many n****s on. I helped too many of my motherfucking friends out. And n****s gonna come foul? And you know who the fuck I’m talking about, n****s. And yes, it’s getting real. I love you, though.”

There was a clear feeling of disparity among the group. Hodgy took to Instagram to call Tyler a ‘fraud’, claiming he’d “turned his back on niggas that never crossed him”. After being asked by one user where he would be without Tyler, Hodgy replied, “If it wasn’t for OF where would Tyler be?” The beef was resolved and clarified via video. In an interview with The FADER, Tyler spoke on the state of Odd Future: “There’s no beef with anyone. Just everyone’s on their island,” he said. “I just miss being at the studio and everyone there.” Earl clarified this on Twitter, “No sympathy for male virgins who’re in their feelings about Tyler pointing out and solidifying the obvious.”

With Tyler focusing on his own music and clothing empire, and Earl becoming an alternative juggernaut with I Don’t Like Shit, I Don’t Go Outside, Syd’s ascent to mainstream fame with The Internet’s Ego Death, and with Frank Ocean in hibernation, the Wolf Gang had grown up. Their different ventures had taken them on separate paths. As Mike G stated in an interview during the summer of 2015, “We’re not necessarily growing apart, but you grow up and you grow into yourself… We don’t have the same hobbies, but it’s still a family.”

The photos posted to Tumblr in 2016 speak more of Odd Future’s mutual respect, with members pursuing their own creative projects. This year saw the comeback of Frank Ocean with Blonde and visual album Endless as well as the Boys Don’t Cry magazine, which included a poem from Tyler inside. Tyler took his clothing line, one that started with a hand-drawn doughnut on a t-shirt, to the runway with his Golf Wang Fashion show. Golf Media was released, an iPhone app intended for the user to be able to keep up with everything Odd Future. Domo Genesis released his comeback album Genesis with collaborations from Anderson Paak and Wiz Khalifa. Hodgy will release his debut album Fireplace: TheNotTheOtherSide in December, while Left Brain has released his MindGone EP and will release Mind Gone Vol 1 in 2017. While they’re a far cry from Ladera Heights, skating and stealing bacon, it’s important to remember how unique Odd Future’s approach was, its influence felt in newer collectives like Pro Era and Awful Records across the pond, and Neverland Clan and Last Night in Paris here in the UK. The contrast in Odd Future’s lifestyle creates nostalgia for what once was, but as Tyler and co have made clear, it was all a process of growing up.