Oxxxymiron grew up up in Slough, studied English Literature at Oxford and used to spit grime in Russian – he talks authenticity and overthrowing the country’s rap old guard 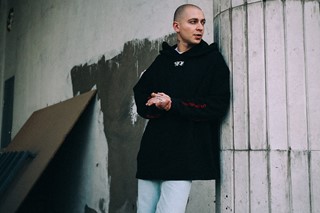 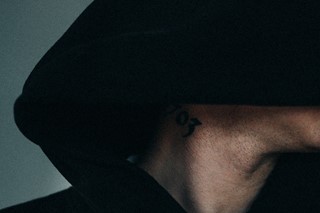 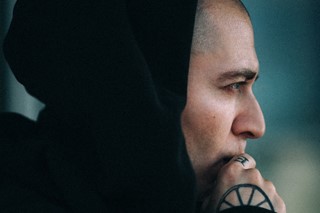 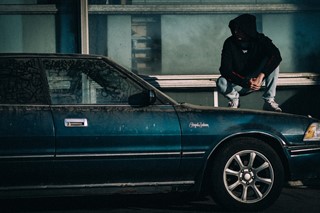 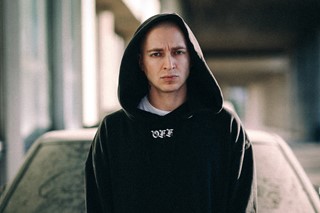 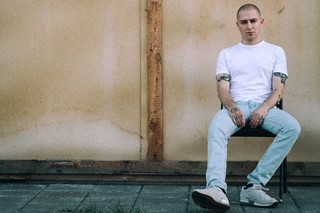 Oxxxymiron is one of Russia’s most successful rappers, but his journey to the top was hardly the most straightforward. Born Miron Yanovich Fyodorov in Leningrad (now St. Petersburg) in the mid-1980s, his family moved to Germany while he was still a child before settling in Slough, one of the most famously grey suburban towns in England. Fyodorov went on to study English Literature at Oxford University and moved to East London following his graduation, where he started battle rapping while working odd jobs on the side. While living in London he discovered the city’s grime scene and incorporated aspects of its style into his rapping, and he soon started racking up millions of views on Russian hip hop websites thanks to his unconventional form, complex wordplay, and intellectual lyrics.

Fyodorov began to break into the mainstream Russian consciousness following long tours of Eastern Europe, two albums, and a handful of mixtapes, picking up fans from street kids to academics. But he didn’t get there without ruffling a few feathers – he’s frequently criticised the old guard of the country’s hip hop scene for what he sees as a retrogressive adherence to traditional rap forms. There’s even been a growing interest in Fyodorov’s music outside of Russia, though he insists that he’s not seeking validation from the West. “What’s validation?” he says, “If you’re a real MC, validation has to be based on how people see your lyrics. If people don’t understand it, I may be flattered by the attention, but at the end of the day I don’t care. Someone from the US did English subtitles for one of my recent battles – now that’s real interest, that’s dope. The same goes for my Russian listeners. At the end of the day, I’m making rap for people that have that hip hop background.”

We spoke to Oxxxymiron about grime, growing up in Slough, and authenticity following his performance at Moscow’s Afisha Picnic festival.

Tell us a little bit about your background.

Oxxxymiron: I was born in St. Petersburg – Leningrad, at that time. I lived there until I was nine. My dad is a physicist. In 1994 we moved to Germany, because there weren’t too many opportunities in science in Russia during the 90s. We lived there for six years, then my dad got another job in the UK in 2000. The first place I lived in was Slough, which is not, like, the ultimate shithole, but if you go on Wikipedia it’ll show you a poem about the place by John Betjeman that starts: ‘Come friendly bombs and fall on Slough! It isn’t fit for humans now.’ It’s like a factory place, there isn’t much to do. I was close to London, so I lived there for four years and then I got into Oxford University, somehow. I went there, got kicked out, got back in. I was actually so shocked that I got in in the first place. I first thought it was a joke at the time, because me and another girl were the only ones from that school to get into Oxford or Cambridge in, like, five years. It was just a regular state school. It was a very extreme jump from Slough to Oxford, on every single level.

What did you study?

Oxxxymiron: I did English Language and Literature. On top of that, because I was very stubborn, I decided that it would be a good idea to take Medieval Studies as my specialism – so, everything up to Chaucer. I was also president of the Oxford University Russian Society, inviting guest speakers and organising vodka parties, just doing everything in order to not study. I was actually quite a good president, but I was a terrible student. In the end I graduated with a third (class degree). I had some very weird jobs for three years, working for Russian oligarchs in London and stuff, then decided to move to Canning Town because it was one of the cheapest areas in London and I was still broke. I lived there for two years, unemployed, doing underground shows and open mic sessions and figuring out what my music should sound like.

“I was 23 and the definition of a struggling artist, trying to break into a music scene thousands of miles away” – Oxxxymiron

How long did that last?

Oxxxymiron: It lasted for two years. I was 23 and the definition of a struggling artist, trying to break into a music scene thousands of miles away. At the time I was battling online against other Russian MCs from different countries. I was fascinated by the battling aspect of rap – I am, primarily, a battle MC. At that time it was the only way to get exposure unless you were signed to a label. I knew that I had something that other MCs didn’t have. I came fourth out of about 3000 MCs in the largest Russian online battle at the time and it gave me a lot of exposure – I even started doing concerts after that. I wrote my first album in 2011, and things slowly started taking off after that. Then in 2012 I fell in love with a girl and moved to Moscow, 20 years after I first moved away from Russia. That was another dramatic change, as you can imagine. I was still not earning money with my raps and tried to make ends meet by ghostwriting for other artists. Then one of my videos got like a million views in the first month, and since then the whole thing was just ever-growing. That’s my story, in short. 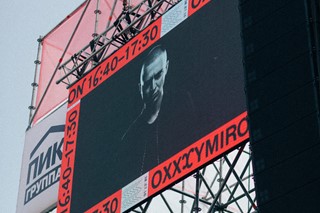 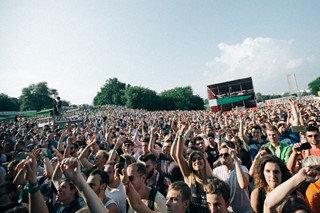 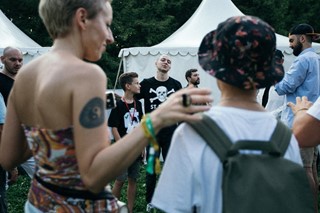 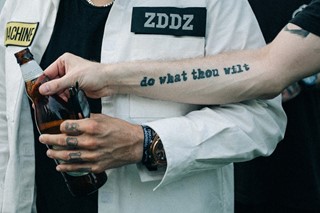 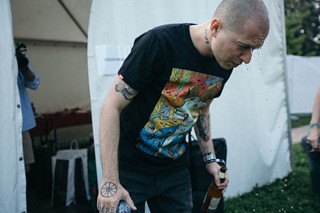 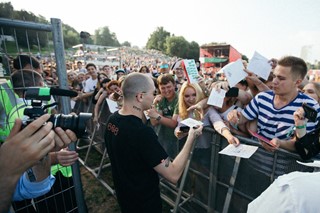 How did grime factor into it?

Oxxxymiron: I became aware of grime around 2007, which was actually quite late. Before that, I was listening to German hip hop, so initially I wasn’t too open-minded about the UK side of things. Then I got into a bit of 2-step, then dubstep, a bit of jungle, a bit of drum‘n’bass, and slowly came to realise that grime was actually the most progressive, unusual thing to come out of the UK. I wasn’t the first person who tried to spit grime in Russian, but I was one of the first.

Does grime work well in Russian?

Oxxxymiron: I don’t really think there are any language limitations. There’s some great grime music in Germany – not a lot of people know about it. It all depends on the talent of the individual MC and their patience, because obviously grime is not rap. A lot of Russian MCs make the mistake of trying to spit standard rap bars over grime beats without changing the syllable patterns, (rhyme) schemes, and all that stuff. Most people are too lazy to study that.

“If you can make hip hop in Russia... then what could possibly be the problem with Russian grime?” – Oxxxymiron

They just wanna jump on the genre because it’s trendy?

Oxxxymiron: Well, grime is trendy now, but it certainly wasn’t six years ago when I started doing it. Now it’s trendy because suddenly we’ve got Skepta being pushed by Drake and you have a huge interest from the US, but at the time it was very hard for me to explain grime to Russian people. In Russia a lot of people still don’t know what grime is. There’s always been debates, like ‘If hip hop is black culture – if it was born in Harlem and the Bronx – can we make authentic hip hop in Russia?’ Personally, I think it’s a universal language. Obviously, some Russian rap is limited to generic copies of the original culture, and that’s cheap. But the crazy thing was that when we started doing rap when I was like 15 or 16, the standard response from Russians would be ‘Are you trying to be black?’ That’s quite a fascinating thing in itself. If someone is black and doing country music, are they trying to be white?

If you can make hip hop in Russia – and by now no one can debate that, because it’s one of the biggest (genres) in Russia – then what could possibly be the problem with Russian grime? Yes it’s a London thing, and yes it has very particular roots in Jamaican culture and other types of London music, (but) you can definitely make a Russian version of that. I sort of stopped doing grime for a while, focusing more on hip hop and mixing everything up, but I think now it’s time to bring it back. I’m just surprised there’s not more younger Russian grime MCs.

You haven’t been interviewed much by the foreign press yet. How do you feel about the rising interest in your music outside of Russia?

Oxxxymiron: There are definitely artists here who deserve to be heard in other countries. There are some very dope Russian lyricists. The only problem is the language barrier. To most people, Russia is still a mystery: ‘What is it, the West or the East? An evil empire? How do they have rap there?’ At the same time, there are a lot of Russian artists who have these illusions that the West greatly cares about them – come on, let’s be realistic. There’s only one example that I know of where the language barrier has actually been broken, and that’s Keith Ape from Korea. He’s actually quite successful in the US, and he’s actually spitting in Korean and Japanese. Who knows? Maybe people will end up liking Russian rap, we’ll see. To be honest, I just want to write my shit and if it’s good, things will just happen.

“Rappers in Russia are mostly just very bleak copies of their Western counterparts. We were fighting against the rap purists” – Oxxxymiron

The rapper ST compared you to Lenin, who was also Russian-born, had a fine education abroad, and came back here to start a revolution. Do you see yourself sharing that mission?

Oxxxymiron: Imagine if I were like ‘Fuck yeah, I am like Lenin.’ That would be ridiculous really. (So I’m) obviously not, but if you take that down a notch, I did change Russian rap quite a lot, for better or worse, over the last five years. Before that, there was way more emphasis on content rather than form – what was being said, rather than the way it was being said. No one cared about double rhymes and flow. You need to know and respect the roots. At the same time, I quote books and don’t shy away from being geeky – before me, that was pretty much non-existent in Russian rap. I guess I made it cool for the bookish kids to be a part of hip hop. So I brought those two elements together. You could say that’s sort of my little gift to Russian rap.

Did the rappers whose credibility you questioned get pissed off?

Oxxxymiron: I wasn’t really putting their credibility into question – I don’t really have a street background, so how could I possibly do that? I was questioning their originality. I was calling the big name rappers lazy, dumbing down their own fans. Rappers in Russia are mostly just very bleak copies of their Western counterparts. We were fighting against the rap purists who were like ‘hip hop must be based on jazz and soul samples, you have to rap like the Wu-Tang Clan, you have to wear baggy clothes and smoke weed and play basketball.’ That, in my opinion, is bordering on some sort of a weird imitation of western black stereotypes. That’s just bullshit. You have to bring in your own culture. Hip hop is a universal language – yes, it is black music, no doubt about that, and you always have to respect that, but you have to bring your own culture into the mix otherwise you’ll never be authentic.