Turin’s Club to Club festival, a five-day, multi-venue dance party, has established a neat reputation back home. Former attendees tend to wonder why imitators aren’t swarming the UK, and those yet to visit say pretty much the same, albeit while grimacing with envy. Now into edition #14 with smaller sister events spanning Europe, C2C makes its name cutting an edgy path from pop to the avant garde. Organisers aim to “push the boundaries” between the two, preferably while leading a bucketload of cultured Europeans towards euphoria.

Caroline Polachek is bringing back Dido
Club to Club15 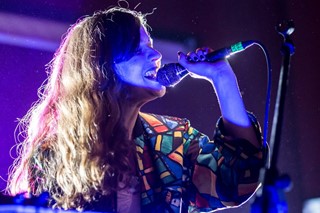 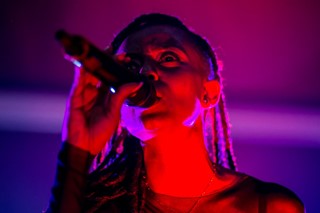 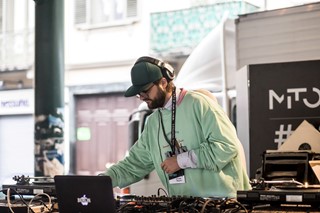 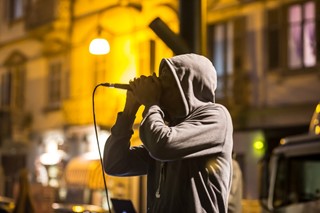 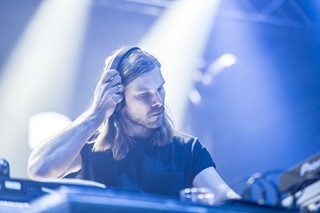 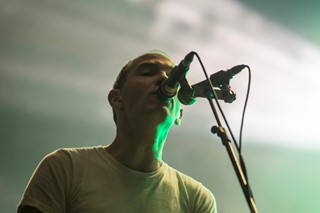 NOW IS THE TIME TO FORGET THE PRESENT

It’s 3am when two hyped dudes on Club to Club’s giant hangar of a dancefloor quit yelling, waggle fingers and, hunting a quiet spot, drag me fast through swathes of smoking dancers in day-glo halos and neon necklaces. The younger guy is Damien, who likes to append his mate’s comments with a warm scowl and an eye-roll. The friend is Alexandre, a 30-ish Frenchman of visible intensity, whose demeanour – at once curious and cynical – somehow conveys a suppressed yen for anarchy. Together, they analyse the specifics of Club to Club’s popularity and awesomeness.

“This kind of music is fashionable for young people – hipsters, etc,” offers Alexandre, sounding irked. “Maybe some of the people are here not because they like the music, but because of the trend.” Damien’s eyebrows shoot toward the ceiling. “I think,” he replies, “that they saw the lineup, they saw Caribou, they saw SBTRKT, they saw €45 – they go to the festival... no?” But right now, why are dance festivals Europe-wide so prestigious and lucrative? Alexandre shrugs. “In Italy, there is a deep reason for this. In north-west France, there are more and more little festivals having success in the (economically troubled) parts. In Italy, it is even tougher. There is 40 per cent unemployment among young people. In hard times, historically, young people try to find other things to have more fun. You forget about the present.”

For all their quibbling, the Europeans are pretty on point. On one level, maybe the festival’s vanguard lineup of recession-soundtracking electro would sell 35,000 tickets anywhere, given a decade to snowball and germinate. But essentially, it just makes perfect sense for Turin to host. Club to Club’s avant garde and techno thread is not just consistent with Turin’s cultural background – although it’s apt that the city is known as “the Detroit of Italy” for its car industry, as well as being a locus for hardcore punks and anarchist squatters in the eighties. But the festival also reanimates the spectre of Italian futurism, a movement that informed original techno at its inception. Now, with bookings as uncompromisingly radical as Club to Club’s – see the Kode9-orchestrated cluster of Hyperdub artists at a seated baroque theatre – the futurists’ pioneering spirit lives on and continues to propel electronic music far from the museum-mausoleum vibe of retro-fest culture and into a bright, uncertain future.

EVIAN CHRIST IS THE FUTURE

The first thing you notice stepping into the main venue Friday night is a few tall screens, which command Evian Christ’s backline like drill sergeants. As he plays, pinpoint beams flash like eyes before an accident. Christ on the cross appears in a warped constellation. Josh Leary has come armed with a new, retina-sizzling light display as abrasive as his beats, and the effect is captivating. Not that it threatens to overpower the music: in the huge, heaving hangar of Lingotto Fiere, the soundstorm is so hard-hitting it’s painful, anarchically abrasive in volume and velocity. But it’s also moving, and not just in the literal sense of knocking you onto your heels. Leave the overview to the starry-eyed Italian I found waxing lyrical post-set: “You share the feeling of great music, but it’s even more than that. You share the moment. It’s this massive... all-arounding, you know?”

While straightforward sets from Pantha du Prince, SBTRKT and even Fatima Al Qadiri faded into the lineup slightly, Kelela has a curious elegance that means you’re always allured. Her live show is gorgeous in a dreamy way, but with a stagetime of around 3am, her vaporous grooves suffer from a kind of night-bus-home fatigue. Luckily, 4am saviours Millie & Andrea are soon on hand to electro-jolt the back row’s drooping heads.

With sets running till 6pm, it’s important that surroundings feel cosy enough to buoy spirits. Given that the venue is a bleak former Fiat plant, it’s commendably fit for purpose, with ample space, laissez-faire security and a constant undercurrent of heel-frazzling bass keeping things rosy. The factory-like surroundings create a cool spectacle, too – not just with the abundant luminous clothing and headgear, which several comic talents have twisted into dayglo cocks and balls, but with roving beams and corporate projections that dart hypnotically across the walls, sci-fi like.

Saturday night is full of dystopian scenes, with local venue Lingotto Fiere’s two rooms going infernal before, at midnight, Germans Apparat, Recondite and Marcel Dettmann take over to celebrate the 25th anniversary of the Berlin Wall’s fall. Earlier highlights came with the tantalising, dropless, strangely blissful arpeggios of Milan maestro Lorenzo Senni, and London’s Visionist, who entombs sparse snares in melancholy drones and smashed-glass static. But most eyes fall on Future Brown, the scene-leading, Warp-signed supergroup of Fatima Al Qadiri, J-Cush (who runs Lit City Trax) and Nguzunguzu, who make a rare collaborative performance tonight. Chaperoned by guest MC Prince Rapid, who featured on the group’s “World’s Mine”, they play a set of apocalyptic carnival music, caught between the club and the kerb.

Shy in his trademark baseball cap, the Montreal producer fizzes reliably along right through his 90-minute set. Reinventing straight-up chillout as something elusive and propulsive, Greene specialises in a kind of loved-up fairground house; an array of receding drops that capture your imagination endlessly. And while his eminently European interludes of 4/4 beats and deep goblin vocals induce fits of euphoria, it’s his slowed take on A. G. Cook’s ingenious “Had 1” that animates the boudoir-red room and makes for the blissiest five minutes of the weekend.