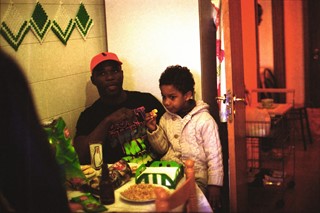 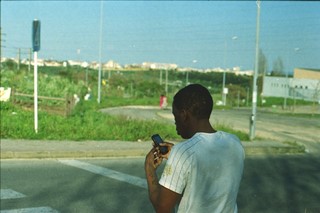 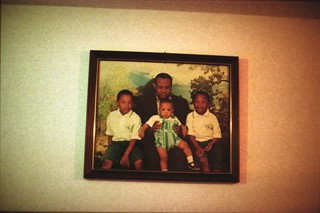 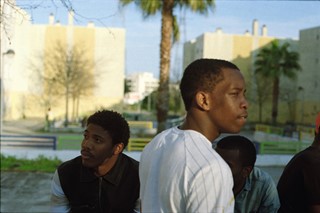 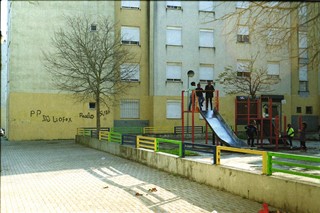 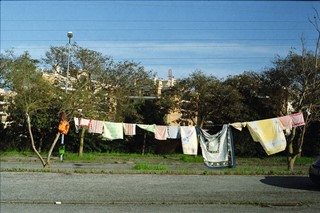 Taken from the spring/summer issue of Dazed:

High above Lisbon, where miles of anonymous high-rise housing projects give way to fields, DJ Maboku is looking over Bairro do Pendão, the hood he grew up in. To his right a shanty town clings to rocks above a knot of illegal housing. Behind him a commuter train rumbles past. “How many DJs are there round here?” he says. “Too many to count. Too many to count.”

We’re here in Portugal, western Europe’s poorest country, to find out the story of the continent’s most thrilling new scene, a frantic and as yet unnamed digital distillation of decades-old high-tempo African dance music created almost entirely by kids housed in bairros sociais (vast areas of government-built social housing). It’s largely made with early 00s software FruityLoops and played at block parties and anywhere kids congregate with an MP3-playing phone.

“Every day something new comes up”, says Maboku, one of the most important producer/DJs in Lisbon. “There are just too many new kids to mention.” Tonight we’re going to be heading to Noite Principe, the now-legendary monthly club night that brings all the disparate strands together.

Breathless editorials over the last few months have been calling it the new grime and “the waist-windingest music ever”, but no one has yet found a label that truly sticks for this unnervingly precise polyrhythmic stew, created with ghetto speed and insistence and showcasing a melodious, breakneck creativity. “This music,” says Chicago-based DJ J-Cush, “will change your life.” He’s not messing about: his label Lit City Trax releases an EP this month by Marfox, the biggest Lisbon scene DJ around.

“There’s not a problem with us calling ourselves ‘little ghetto DJs’, because that’s where we’re from. And that’s where our music is from. But at the same time it’s not ghetto in my mind” – DJ Firmeza

The sound’s roots lie in African dance forms like kuduro, semba, kizomba, and tarraxinha, and in mood it’s similar to the oft-derided late-00s ghetto-bass explorations led by the likes of M.I.A. and Diplo, which took rich kids on funk tours of everything from Brazilian baile parties to South African townships. But the people behind the new music are fiercely resistant to being written off purely as ghetto music. “There’s not a problem with us calling ourselves ‘little ghetto DJs’, because that’s where we’re from,” says DJ Firmeza of Piquenos DJs Do Guetto. “And that’s where our music is from. But at the same time it’s not ghetto in my mind. It can be from somewhere but it can expand way beyond. It was born here: it doesn’t have to die here. If my music was on TV tomorrow, would you still call them ghetto beats?”

It’s an unusual scene in that its birth can be pinpointed to a single decision in a single building, a train station. There, in 2005, young DJs Marfox, Pausas and Fofuxo, all of whom had built a sizeable reputation playing block parties and assadas (communal barbecues) in their own suburbs, decided to join forces by launching a crew, DJs Do Guetto. They were later joined by DJs NK, Nervoso and Jesse.

Almost everyone I speak to cites this crew, and the free zip they released on eMule on the first day of school in 2006, as year zero. (Piquenos DJs Do Guetto even named their crew after them.) They opened the channels for communication between bairros, helping to spread the technical knowhow needed to create these batidas (beats) across greater Lisbon, where three million inhabitants live in an area 30 times the size of the city centre. Many are immigrant families dumped into hastily erected public housing on the periphery and stranded with limited transport.

“400,000 young people have left Portugal since the 2007 crash. That’s from a country of ten million. That’s an entire generation. It’s only us, young rich people and the ghetto kids left” – Pedro Gomes

It can take two to three hours to cross the city, and few outsiders take the trip out to visit the areas that incubate this extreme music. We’re here courtesy of André Ferreira and Pedro Gomes from Lisbon label Princípe. As well as releasing hand-crafted records from the scene with minimal, pared-down line illustrations by renowned Lisbon graphic designer Márcio Matos, they promote Noite Príncipe and act as bookers, managers, publicists and advisers for many of the DJs. “We’re a militia,” Gomes says, looking out of the window at abandoned buildings and car lots while Ferreira drives. He’s skinny and witty, chain-smoking Marlboro Reds while speaking impeccable English. “400,000 young people have left Portugal since the 2007 crash. That’s from a country of ten million. That’s an entire generation. It’s only us, young rich people and the ghetto kids left.”

We pull into a suburb called Quinta do Mocho. Grass and flowers grow between every crack in the paving stone; next to crumbling yellow towers, smoke from the tin shacks rises on the breeze. It feels forgotten and static rather than oppressive and threatening. Gomes says the policing is “more minimal than the constant vigilance one can witness in the centre of Lisbon. It’s run by its citizens here; like Lichtenstein, with fewer rich princes.”

This is the turf of Marfox, the undisputed king of the scene, who inspired a generation of Portuguese kids to take the “fox” suffix in tribute. The 25-year-old has lived here for five months, after being rehoused from the shanty town where he grew up. As we walk to the corner shop, people shout his name. Soon we’re joined by DJ Firmeza, who seems younger than his 19 years, and DJ Nervoso, a calm, wise presence who facilitated much of the take-up of FruityLoops. At 30 years old he, like Marfox, is a veteran in a scene dominated by people under 20. Neither blink as they pass their names graffiti’d on the housing block walls. As we sit and make conversation on a fence, a succession of guys sit down, while girls in dresses with “SWAG” written across watch from across the courtyard. Some are holding babies; all seem to be producers, aspiring producers or fans. An almost impossibly shy guy called DJ Famifox sits down and plays tunes from his phone.

Later, getting ready for the club in his bedroom with the pride of a young man about to slay a party in his home city, Marfox shows off his eye-opening collection of customised Diesel denim jackets and studded trainers. It’s one of the ways he stands out; although most of the DJs have their own bright styles – Nigga Fox wears a t-shirt with “NIGGA” printed across the front, while Firmeza is head-to-toe in gold and metallic-blue Adidas – they usually stick to sportswear. “It’s like the music,” says Marfox. “I want to have an impact, and for people to go along with the distinctive style, and for people to be like, ‘That’s one of a kind. I’ve never seen that before.’”

We peel out of Quinta do Mocho and head back to central Lisbon for Noite Principe. By the waterfront before we enter, we meet Nigga Fox and the Blacksea Não Maya crew and wander into the venue together. Lisbon is a strange place: here, events that happened 250 years ago are spoken about like they took place yesterday, and the centre is filled with pretty but deserted old buildings. Yet it’s also the home of the most futuristic and forward-thinking club music in the world. In Portugal at least, the music is front-page news, and Principe recently graced the cover of the country’s biggest art supplement. DJ Noronha of Blacksea Não Maya, when asked what this means for the wider public, says: “In people who are unaware of this music, it can create an idea that there are so many undiscovered talents in this multitude to be discovered. It’s music that can transmit peace.” His compatriot DJ Kolt adds: “Not just peace, also sadness.”

At 2am, it’s relatively sedate inside the small room where Noite Principe has been held for the last two years. Central Lisbon and suburban kids keep a respectful distance from each another. The mixing is brisk and the rhythms sound more fun and less avant-garde than they do in isolation. This is community music – beats made for block-wide parties where people come together. Beats made to knit different groups into one proud thumping whole. Dancing circles emerge from the crowd then disperse. Couples meet and cop off. One dude is asleep in the corner, another is splayed against a wall. Every other kid seems to be Marfox’s buddy. After he takes the stage at 4:30am, it’s easily the most gone crowd I’ve ever seen: a group of people experiencing something beyond catharsis or euphoria, something collective and eternal. Afterwards we leave, drained. As Nigga Fox said earlier: “It can’t fail. It won’t fail. I’ll work for it and I won’t fail.”

Marfox's Lucky Punch EP is out at the end of the month on Lit City Trax. The next Noite Príncipe party takes place on Friday May 23 at Musicbox in Lisbon, and features DJs Puto Anderson, Lilocox, Maboku and Nigga Fox