You’re more familiar with Kwes than you think. The London-born producer has worked with the likes of Speech Debelle, The xx, Micachu of Micachu and The Shapes and Ghostpoet, but it’s in his solo music that Kwes reveals his gentility. In his tender 2012 calling card "bashful." he sung about unrequited love and “the lack of mettle in my bones” while current piano-led single "36" revisits teen years of confused lust and disorientating crushes. His textural debut album ilp is out on Warp this week and floats across a dreamy glitch-pop landscape that explores these heartaches and more. But it’s far from a public ‘Dear Diary’: Kwes may be comfortable with baring his soul but it’s his past projects that have afforded him the ability to stay grounded while he writes. 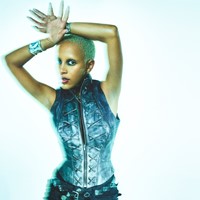 Dazed Digital: You worked on ilp for four years between production jobs. There must be quite a bit of history behind each track?

Kwes: It’s comes from a really heartfelt place. It’s also extremely raw. I just kind of left it in the end – there was so much more I could have done with it. It just felt right to leave it at that point.

DD: There’s this humbleness to your music; you talk about things others might shy away from. Does that come naturally?

Kwes: Yeah absolutely. I guess it might come across to some people as a bit oblique but if you’re getting that from my music that’s really great, it’s what I was trying to do. I’m bearing my soul through music, and I had a lot of fun doing it.

DD: There are a lot of references to your music being ‘free pop’. What's that?

Kwes: It was me telling myself I’d better come up with a piffy word to describe my own music before other people try to call it something else. I’ve been listening to pop music all my life, really. As a kid I was really into the Sugababes. Also J Dilla, Madlib, Timbaland … Just the usual kind of touchstone inspirations for teenagers. I hugely got into the Beach Boys when I was about 16 and a lot more electronic music from there.

DD: So let’s talk about your production gigs and how each has impacted on you. Shall we start with Speech Debelle?

Kwes: I worked on her second record, Freedom of Speech. It was the first time I’d worked on an entire album and I’m really pleased she gave me that opportunity. I think she’s brilliant and I think she doesn’t get as much cred as she deserves. There’s a load of things I would have done differently but that’s all part of the learning process.

Kwes: Mica’s a dear friend. Those processes just feel completely normal. She’s got a studio two doors down from me – the other day she just came in and we played drums for half an hour. I’ve got a fold up bike and I was using it as percussion and she was on the drum kit. I’ve learnt loads working with Micachu. I feel like I’ve got a tighter grasp on composition and like I’ve become a lot more incisive with my technique. I feel like I’ve really learnt restraint through working with her.

DD: You also worked with The xx, producing an early demo of "Insects". What were they like back then?

Kwes: When I was working with them back then they were just so unassuming. I heard a performance they did earlier this year and their confidence had grown so much. As I’ve worked with all these people I’ve found out how I work best, gradually. With this one we were working out of Romy’s bedroom studio and it was just a really great experience to have early on.

DD: And you’re working with Ellen Tamara at the moment?

Kwes: Yeah I’m working on her first album. I don’t know where to begin with her, she is just amazing. And soon the world will get to know her. There’s a lot of traditional instrumentation in her music but it’s the way she composes that’s really amazing. The process has been awesome and it’s been a lot more streamlined that previous projects. Only up until April this year I was recording everything on a laptop which kept breaking down so there was a lot of stopping and starting. Now it’s much smoother. As a result of that I’m making decisions a lot more quickly and it’s more exciting.

ilp is out now on Warp.