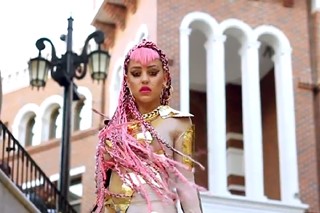 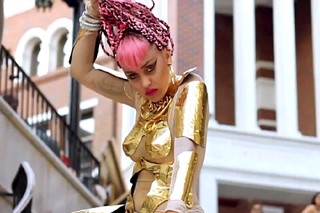 With her debut single 'Das Me', braided stripper-turned-rapper Brooke Candy is coming for every foul-mouthed firespitter in the game. "Slut is now a compliment" the 23-year-old sneers in the thrillingly twerk-able mission statement amidst an addictive, springy beat before reminding us "Candy is my name but there's nothing sweet about me."

Brooke was catapulted to instant icon status after her turn in Grimes' 'Genesis' video, and 'Das Me' marks the next step in her cyberpunk odyssey. The fantastic video shows Brooke flicking her 30-inch braids down Rodeo Drive in the face of horrified onlookers, running a pink stretch limo through the LA suburbs with her crew, before crashing, blazing and bubbling in a hotel jacuzzi. And she does it all while wearing those foot-high custom platforms. Brooke talked us through the making of the video below.

Dazed Digital: What was your initial concept for the video?
Brooke Candy: I wanted it to be a visual representation of myself and the world I've created for myself. It's where I am right now in life. It's an aesthetic combination of all the different cultures you experience with imagery you imagined and have never seen before. I wanted to create a video you would want to watch as a viewer even if you weren't the artist.

DD: It looks like you caused quite a stir on Rodeo Drive.
Brooke Candy: We stuck out like a sore thumb on Rodeo! It was kind of amazing, I think people thought I was some sort of attraction or alien or something. Everyone wanted a photo, even people working in all the high end boutiques. A couple of those double decker tourist buses stopped to let the people riding snap some photos. Towards the end we'd created so much of a spectacle that we were escorted off the property, but by then we had gotten the shots we needed and didn't really care. I remember when I had my old beat up car I would drive down Rodeo blasting my music as loud as humanly possible just to freak everyone out. It's fun to freak people out on Rodeo Drive.

DD: Could you talk us through your co-stars in the video?
Brooke Candy: They're my friends. Seth Pratt makes all my clothes. He's an amazing artist and designer in the process of starting his own line now. Jesse Saint John is a super-talented performer, musician and amazing artist. He's my best friend. Niki Takesh is somewhat of an internet phenomenon. She's beautiful and hilarious. Labanna Babalon is an artist and musician as well. She's the one doing a handstand on the bed. She was actually the first person to hook me up with a job stripping too.

DD: What about the kids in the street singing your song, and the woman pushing you in a wheelchair?
Brooke Candy: Friends, neighbours, lil homies from down the block. They'd heard the song and loved it and wanted to be in the video so we were all about it. The woman pushing me in the wheelchair's name is Yo Landa. She is the shit! Her makeup is always flawless and she's the definition of a strong woman!

DD: What was the idea behind your gold armour? It seems like an evolution of the 'Genesis' outfit.
Brooke Candy: "In the year 2300 Superhuman powers are available to common citizenry. The nanotechnology of recent decades has conferred powers to citizens that would be considered superhuman by 21st century standards. These upgraded "transhumans" could perform feats regarded as Godlike to denizens of earlier times. A suitably upgraded individual - if transported back to the year 2000 - would be impervious to weaponry and nearly impossible to contain. They could morph their body into a seemingly infinite variety of forms depending on the situation encountered." - [an excerpt from futuretimeline.net]

DD: Do you ever fall off your platform shoes?
Brooke Candy: Honestly, no. I've gotten so used to them that it's like walking on clouds.

DD: How do you keep your A$$ in such good shape? Any tips?
Brooke Candy: TWERK.

DD: I saw you tweeting with Charli XCX about a new collaboration. What's going on?
Brooke Candy: I met her when I hosted Azealia Banks' Mermaid Ball in LA. Right off the bat we just clicked, and when she came back to LA a few months later we met up at her show and had a lil freestyle battle, just fucking around having fun and we hung out for the night. Then she got in contact with me to rap on a track on her forthcoming mixtape. She's all about that girl power shit and she's a legitimately cool ass chick so of course I was down! I think the song should be coming out soon.

DD: Is 'Das Me' your mission statement?
Brooke Candy: It's part of it. My forthcoming EP 'Freaky Princess' will be my initial mission statement and will reveal a lot more of who I am what I hope to convey. Nothing can completely express what you hope to ultimately accomplish, but at times I'm trying to show you the future and the end of the world as we know it.